WTF: Why Has an Old Building in a Prime Malletts Bay Location Sat Vacant for More Than a Decade? | WTF | Seven Days | Vermont's Independent Voice

WTF: Why Has an Old Building in a Prime Malletts Bay Location Sat Vacant for More Than a Decade? 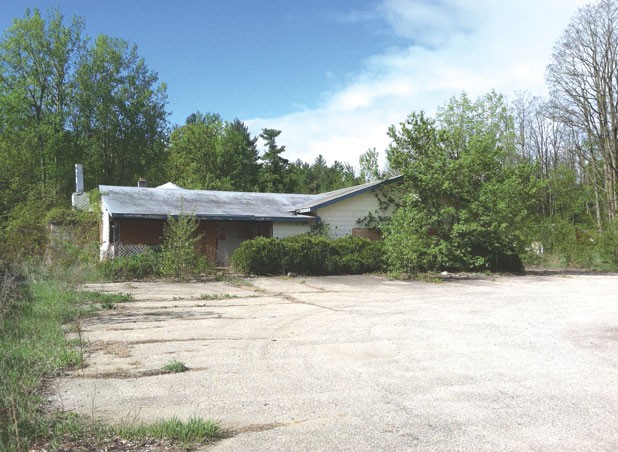 Longtime Colchester residents and frequent visitors to Malletts Bay have often wondered about the fate of a boarded-up building on West Lakeshore Drive, across from Coates Island and the Harbor View Plaza Shopping Center. Sandwiched between the Malletts Bay Cemetery and Dick Mazza’s General Store, the decrepit, one-story building, with its large, unpaved parking lot, has sat vacant and unused for the past 15 years.

By any measure, this chunk of commercial real estate on Lake Champlain’s largest bay is a prime candidate for redevelopment. In the winter, snowmobilers, ice fishermen and ice hockey teams routinely access the frozen bay via the state-owned boat ramp directly across the road.

In the summer, that boat ramp is one of the busiest on the lake’s eastern shore, providing water access to everything from kayaks and rowboats to million-dollar yachts and racing vessels. The commercial strip along the inner bay, which runs from Rozzi’s Lakeshore Tavern & Restaurant to Bayside Park, is the closest thing Colchester has to a bustling waterfront district. Drop a store, restaurant or bar in that spot, and one can imagine it becoming an overnight gold mine.

Instead, the only use the spot has seen in recent years has been as overflow parking for the boat ramp and a place for the Malletts Bay Fire Department to flush out its trucks’ water lines. WTF?

Older Malletts Bay residents and town officials know the land as the old Casa Romano property, site of one of greater Burlington’s once-lively-but-now-defunct establishments. Back in the 1970s and ’80s, Casa Romano was a highly successful and respected Italian restaurant.

Inge Schaefer, who’s lived in Colchester since 1968 and founded the Colchester News Magazine — she still writes a monthly column for the Colchester Sun — remembers Casa Romano as a “lovely establishment” where proprietor Don Romano greeted customers at the door. In his first year, she says, he offered free glasses of wine with each meal. Sen. Dick Mazza, who works next door, remembers eating dinner there often with then-governor Thomas P. Salmon and his wife.

In the ’80s and ’90s, the place changed hands several times and began its slow but steady decline from eatery to seedy nightclub; Mazza recalls “some kind of striptease or something” happening in the nightclub before it finally went belly up.

In March 1998, the Vermont National Bank began foreclosure proceedings against then-owner Gerald “Jake” DeForge. DeForge was approached by Joe Handy, of the downtown Burlington Handys, about buying the property. Handy’s company, Sisters & Brothers Investment Group, owns the nearby Malletts Bay Campground, the Calm Cove Marina and the entire chain of Simon’s convenience stores and gas stations. His plan was to put up another Simon’s — in direct competition with Mazza’s General Store, which has been next door since 1954.

In September 1998, Handy agreed to buy the property for $300,000. But when he showed up at the closing, he was told the property had already been sold out from under him — to Mazza, David Coates (of the Coates Island family) and Maurice “Moe” Germain, for $325,000.

As Coates recalls, “We didn’t want to see [DeForge] go bankrupt, because he’s a bay boy, so we stepped in and bought it — or so we thought.”

Coates and Mazza’s plan was to build the town a teen and senior center on the site, as well as an extension of the Colchester Public Library. Handy proceeded to sue them and the bank. The case landed in the Vermont Supreme Court, which in September 2000 ruled in Handy’s favor.

Since then, however, Handy has had no luck in landing a tenant. At several points during the early to mid-2000s, he says, he was approached by prospective tenants about opening restaurants on the site. However, Handy claims that because the town wouldn’t allow outdoor seating, they all walked away. “Every time we’ve tried to do something there,” he says, “somebody throws something in the way.”

Is Dick Mazza that somebody? Handy won’t speculate. For his part, Colchester’s favorite son insists that he’d love to see a successful business move in next door. Colchester, unlike Burlington, has no ordinance requiring that vacant buildings be torn down, provided they’re boarded up and secure. But, because the West Lakeshore building has been broken into several times and contains asbestos, the town condemned it a few years ago.

“It’s an eyesore,” Mazza says. “I know the town has been after [Handy] for 10 years or so to do something with it or tear it down.”

At long last, it appears the latter outcome will soon come to pass. According to Sarah Hadd, Colchester’s director of planning and zoning, the state recently granted Handy a permit to begin asbestos abatement, which he’ll do in the next few weeks. Once that’s complete, Handy says, he plans to have the building razed.

What’s next, however, remains a mystery. Because there are no sewer lines in Malletts Bay, a large commercial operation is off the table. The property’s GD-1 zoning allows for a convenience store, restaurant, bar or office building, but not for a gas station or hotel — the last two of which are signature Handy businesses. As a result, Handy says, “I’m going to just wait and see” who comes along.

Ditto for everyone else in Malletts