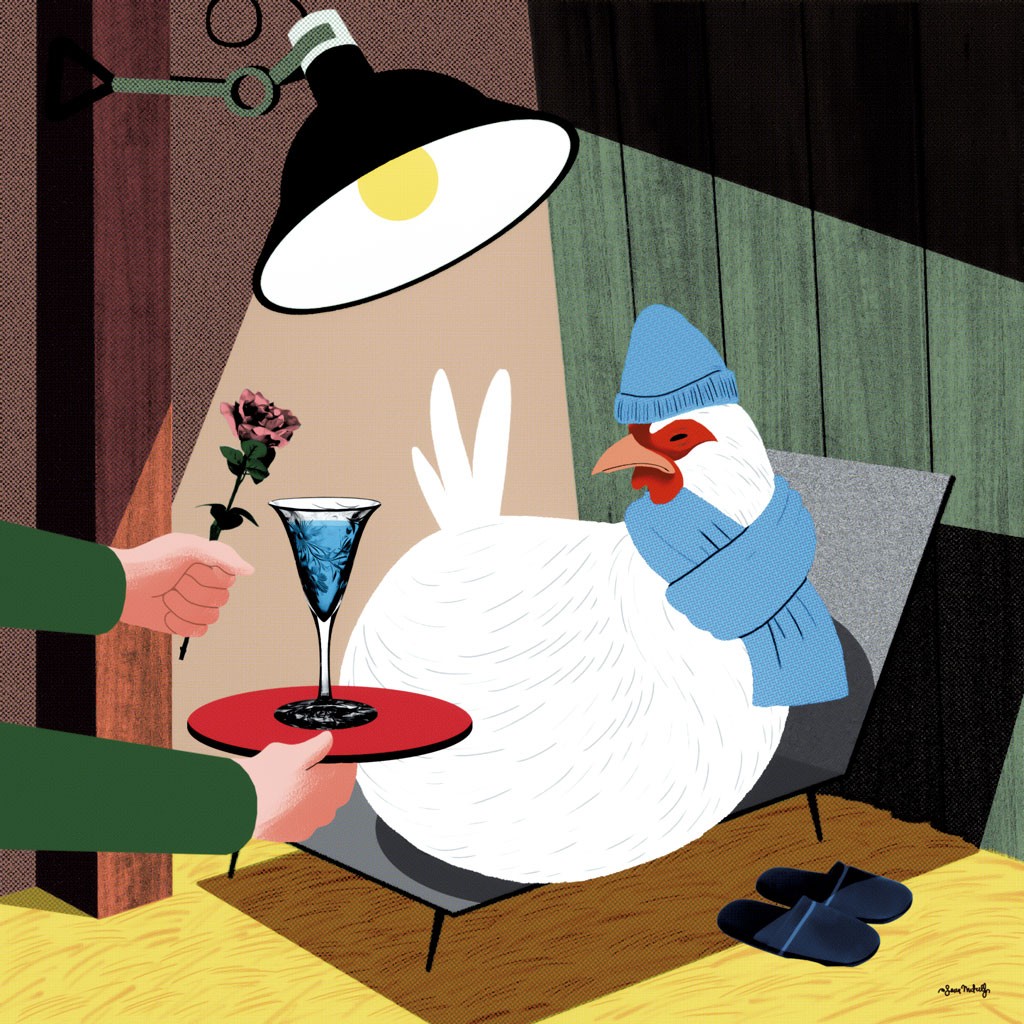 A few weeks ago, I found myself standing in front of the egg cooler at Burlington's City Market/Onion River Co-op, bewildered. Usually filled to the brim with dozens of local, farm-fresh eggs in an array of colors and sizes, the cooler was empty. Empty! I guess I'll have to go to Price Chopper, I thought, channeling Droopy the dog. In my spoiled locavore life, grocery-store eggs are for dark days, indeed.

But here's the thing about eggs in winter: Chickens are a demanding lot. Not only are they prone to withholding lays when they get cold, they also require 14 to 15 hours of daylight, among other accommodations, to maintain production. This according to three Vermont chicken farmers who sell to City Market, Healthy Living Market and Café in South Burlington, and other local food stores.

"A couple weeks ago, we were out of every egg," said City Market perishables buyer Jason Schatz. "One of our main producers missed a delivery or something." Other providers' chickens were on the outs that week, too. Schatz said the always-busy downtown co-op sells 1,200 to 1,500 dozen eggs per weekend, and keeping the shelves stocked in winter can be a challenge.

"We carry eggs from so many local farms to try and deal with that situation," added Allison Weinhagen, the store's director of community engagement. "We try to spread it around so we can have a steady supply of local eggs from diverse smaller farms. We don't put all our eggs in one basket, so to say," she said with a laugh.

Schatz said he brought in more producers after the holiday baking season. "We were running out of local eggs," he said. "But when you want to support the local food system, you have to learn what that looks like."

Sometimes, it looks like fewer eggs on the shelves.

In Starksboro, Eric Rozendaal of Rockville Market Farm keeps about 1,500 laying hens. He jokingly calls his winter operation "arctic egg farming." Even with the hens enclosed in long, airy greenhouses, with lights ablaze from 3:30 to 7:30 a.m., he said his winter haul drops to about half of its summer levels.

Still, Rozendaal said fluctuating egg production is natural. "The vast majority of eggs are produced in a completely unnatural environment," he noted. "This is a totally different type of production. It's in sync with nature." In industrial egg operations, caged chickens live indoors year-round, beholden to an artificial daylight cycle, but even small-scale, cage-free chicken farmers attempt to tinker with the hens' sense of season.

Savage Gardens is one of City Market's main egg suppliers. Close to 3,000 hens strong, the North Hero farm — when things are going well — produces about 225 dozen eggs per day, or nearly 1,600 dozen per week, according to co-owner Hugo Gervais.

Last October, Gervais said his hens suddenly stopped laying. "Their production dropped to about 30 percent of what it normally is," he recalled. "It happened over the course of three days."

Gervais had a veterinarian check for disease, but the hens were fine. He never got to the bottom of it, though he speculated that the change was due to some combination of weather, a change in feed and the shortening days. Or maybe the girls got depressed when the sky went gray. "When it's cloudy for a long period of time, that affects them, too," the farmer said. 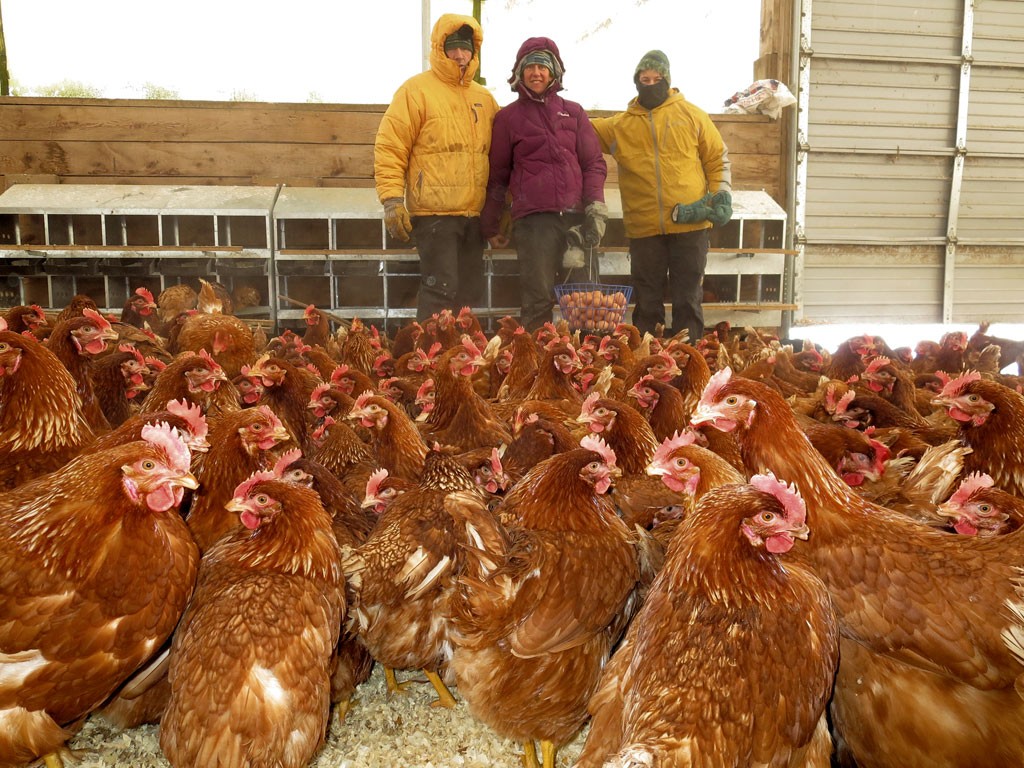 After a few weeks, the hens bounced back. Then, in December, they dropped off the charts again, dishing Savage Gardens "a double whammy," Gervais said. "You get this feeling when it starts, like, Oh, no, here we go."

As this unfolded, the Gervaises were busy building insurance against another subpar season. In July, they broke ground on a new hen house. It's not heated, but it is tightly insulated, so the birds' body heat keeps it warm and cozy. The new house also features snug boxes for the chickens to snuggle into when they're ready to lay. It's well lit from 5 a.m to 9 p.m.

Though he pastures his hens all summer, Gervais said he'll keep them indoors until production stabilizes. "What happens is, some chickens will go out and they'll figure out the daylight," he said. "You can fool them a bit with the lighting, but they know." In winter, even with food scattered outside, the birds tend to want to stick together in the warm hen house, he added.

The barn cost $250,000, which Savage Gardens partially financed through a loan from City Market. Gervais kept labor costs down by doing much of the carpentry work himself and with help from friends. "It's a lot of money, but at this point, it was taking a lot of time to take care of the birds," he said. "Then you go for a slump and the bills keep on coming."

The new building is already paying off, Gervais reported: The hens are laying more. And conveyor belts gently whisk the eggs away for cleaning and packing, which saves the farmers the labor of manually collecting the eggs. The new building also includes an automated watering system. Previously workers had to water the chickens by hand, and keeping it from freezing was a constant challenge.

Little-known fact: Chickens drink a lot. While practices differ from one farm to the next, everyone contacted for this article agreed. "It's amazing how much water can go into a little chicken," said Beth Whiting of Maple Wind Farm in Huntington, whose flock went on a strike earlier this winter, protesting a small leak in the water system. "We had a stint when our chickens weren't getting enough water. That put them back quite a bit," Whiting said. "[Ample water] is crucial to their production."

Maple Wind uses a long, hoop-style barn during winter that, like Rozendaal's, is not insulated. The chickens drink water from open tubs warmed by electric heaters to keep the water from freezing. Whiting and her husband, Bruce Hennessey, clean and refill the tubs with fresh water daily, and collect eggs nearly every hour to keep them from freezing and cracking.

Whiting and Hennessey also light their barn from 4:30 to 10 p.m. Though she couldn't offer an accurate estimate of the cost of running lights and water heaters, Whiting said these — along with the shavings spread inside the hen house to keep things dry and sanitary — represent an increase in the cost of doing business during winter.

Then there's the feed. Hennessey said the hens each consume about a quarter pound of grain per day during the warmer months, when they're out to pasture and supplementing their diet with bugs and grubs. In the winter, grain rations jump to a third of a pound per hen per day. Maple Wind's flock is around 1,600 birds, so that difference amounts to roughly 130 pounds per day — almost two tons a month — of additional grain through the cold months to compensate for the extra energy the hens expend to keep warm.

Whiting said a healthy Maple Wind hen lays one egg every two or three days during the summer. In the winter, the frequency drops to one egg every three or four days.

Now, after their three-week January dehydration slump, Whiting said her hens are back on track for normal winter production.

That's good news for everyone — not least her customers. "People are coming to expect these fresh eggs from local farms," the farmer said. "It's nice if people can understand a little bit more what goes into it — and that we're doing the best we can with the elements. When people don't see their favorite egg in the case, there may be extenuating circumstances. I'm not there to tell that customer why my egg isn't there."

Schatz of City Market tells it like it is when customers ask why a particular egg isn't on the shelf: "The mind-set is that people expect anything to be available on demand, but when you're working with the natural world, you can't use Amazon Prime to get eggs from the chickens."

The original print version of this article was headlined "Lay, Ladies, Lay"