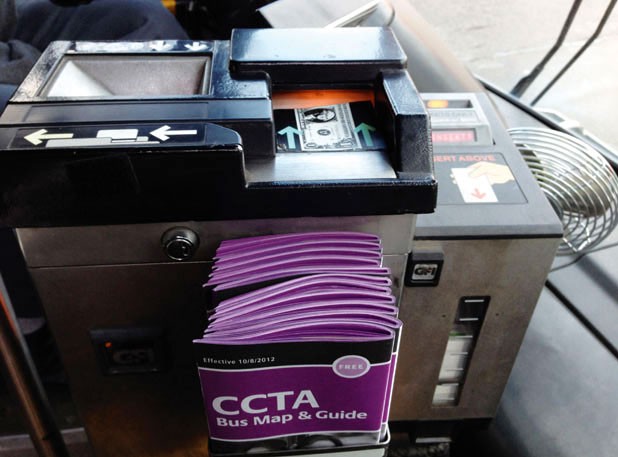 When my car broke down last month, and I needed to be in Montpelier for a story, I hopped on Chittenden County Transportation Authority’s LINK Express. While regular bus riders are probably smart enough to buy prepaid swipe cards, I climbed on board with a pocket full of fives and tens.

The one-way fare was $4. So when I slid my $5 bill into the fare box, I expected to hear the sweet sound of four quarters clanging into the coin-return slot. But I never heard it. The machine didn’t have a coin-return slot. Damn thing just kept my dollar.

WTF? The vending machine in my office gives change for the Lifesavers that cost 75 cents. I’ve used post office stamp machines that take cash and give change. Why don’t CCTA buses — whose one-way regular fare is a very unround $1.25 — do the same?

When I put that question to CCTA general manager Bill Watterson, he fell momentarily silent. “Have you ever been a passenger on a transit bus?” he finally asked.

Ouch. I answered that I had, but confessed that before my recent LINK ride, it had been quite some time. “Imagine if everyone that was boarding didn’t have the correct fare and needed to do a cash transaction,” Watterson continued. “It would significantly increase the amount of time it would take for a bus to perform a route and inconvenience everyone.”

Except, of course, for the dude getting his dollar back.

Aside from delays, Watterson said there’s another good reason why transit authorities across the country stopped making change in the 1970s and ’80s and switched to swipe cards and exact fares: robbery. Having that much cash on board made buses ripe targets for stickups.

But those were the old days, when bus drivers carried the money on their person. Today, the change would be locked inside an automated vending-type machine. Breaking into one of those is like trying to rob an ATM — and there’d be a heck of a lot of witnesses on board to deter would-be criminals.

That may be, Watterson replied. But there’s another consideration: The ticket-vending machines CCTA uses at bus stations frequently get jammed and require significant maintenance. If a fare box broke while dispensing change on board, it could sideline an entire bus full of passengers.

Watterson, who’s been at CCTA for about a year, said he wasn’t aware of any transit authority in the nation that still gives change on board. Many dispense coins at station vending machines, he said, and recalled receiving dollar coins in change when he took a trip on Salt Lake City’s light-rail system.

No change in all of Barack Obama’s America? That just didn’t sound right, so I called Martin Schroeder, chief engineer at the American Public Transportation Association in Washington, D.C. Schroeder said Watterson is correct — to his knowledge, no major transit agency gives change on board.

That’s not because it isn’t possible, he noted. If CVS cash registers can dispense change in a little plastic bowl, Schroeder said, public buses could certainly do the same. But, he added, “I don’t think that giving change is on anybody’s hit list to do. There are better ways of doing it. It could be a smart pass or smart card. Most bus fares that are cash oriented that I’ve seen are all exact fare. If you’ve got too much, OK, well, that’s your contribution.”

My “contribution,” eh? So how much are transit authorities raking in from unsavvy, overpaying cash customers like myself? In Great Britain, it’s a bloody fortune. The London Evening Standard reported last September that London bus passengers had overpaid more than £2.2 million over seven years thanks to bus-stop ticket machines that do not give change. The newspaper filed a Freedom of Information request to get the information.

Is CCTA seeing a similar windfall? The agency still collects a third of its fare revenue in cash — about $716,000 last fiscal year. Surely some of those riders overpaid like I did.

“If there has been an overpayment that has been occurring, I certainly don’t think it’s significant,” Watterson said. “There are also people, unfortunately, paying less than what’s due. Maybe it balances out.”

How are people underpaying? By putting handfuls of pennies into the machines and using “falsified” fare cards, Watterson said vaguely, perhaps not wanting to inspire future fraud by describing it in detail.

There’s one spot of good news for cash-holes like me. Watterson said that, if any CCTA lines are suited for change-dispensing fare boxes, they would be the LINK Express routes to Montpelier, Middlebury and St. Albans, because they have relatively fewer passengers, and fewer riders getting on and off, than Burlington-area routes.

Something to look forward to. In the meantime, I’m saving my quarters.