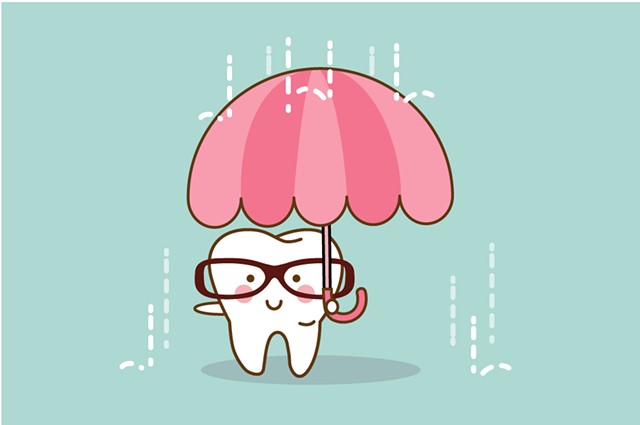 Most of the time, this column answers questions that are specific to Vermont: Why is there a phallic mushroom sculpture on Burlington's waterfront? Why is the Lord's Prayer carved into a boulder outside Bristol? Why does a golf-ball-shaped dome stand atop a mountain overlooking St. Albans?

This week, we tackle a noggin-scratcher that applies to most consumers across the U.S.: Why don't most basic health insurance plans cover routine eye exams and visits to the dentist? Why have these two areas of human anatomy been deemed less worthy of routine maintenance and upkeep?

Even viewed strictly in financial terms, the practice seems to make as little sense as insuring medical treatments for right kidneys but not left ones. After all, eye doctors aren't just in the business of selling contact lenses, prescription sunglasses and tiny screwdrivers, nor are dentists mere delivery systems for premium toothbrushes and dental floss.

Consider the health benefits that a competent ophthalmologist can impart. In addition to diagnosing eye disorders such as glaucoma and cataracts, an eye doctor can recognize signs of multiple sclerosis, diabetes, hypertension, leukemia, sickle cell anemia and lupus. More than just windows to the soul, eyes are peepholes to the brain through which an ophthalmologist can catch an undiagnosed brain cancer — or polyps in the colon. Talk about retina-to-rectum results.

Similarly, a dentist can save the life of a patient who came in for a toothache. A study published in the September 2013 issue of the Journal of Endodontics looked at medical complications resulting from tooth abscesses over a nine-year period. Between 2000 and 2008, 61,439 hospitalizations nationwide were attributable to abscesses, 89 percent of which occurred on an emergency basis; 66 of those patients ultimately died of their complications. The average hospital stay was three days. More than three-quarters of those hospitalizations were paid for by Medicare, Medicaid or private insurance.

So why don't insurance carriers recognize the dollars and sense in catching cases of throat cancer and hypertension early, before the afflicted show up at their local emergency departments? If nothing else, those companies must have a vested interest in their customers seeing well enough not to step in front of an oncoming bus.

As in much of health care, the explanation has more to do with historical factors than with logic or common sense, said Jeanne Keller. Until her retirement two years ago, Keller spent more than 30 years as a health care policy expert, most recently with the Burlington consulting firm Keller & Fuller.

She pointed to the origins of Blue Cross and Blue Shield, which were separate companies until they merged in 1982. The former was founded in 1929 by hospitals as a way to ensure reimbursement for their services. Blue Shield formed a year later to make sure physicians were duly compensated, too.

"So the insurance plans they sell are deeply, historically embedded with the ... medical community," Keller said. In short, Blue Cross and Blue Shield were created by and for hospitals and physicians, who didn't consider dentists and ophthalmologists "real doctors" — at least where financial reimbursement was concerned.

Not until the 1980s and '90s did dentists and ophthalmologists begin presenting themselves as primary-care providers and forming their own insurance carriers, such as Delta Dental. Along the way, other health care professionals, such as osteopaths, naturopaths and chiropractors, lobbied to get their own slices of the pie.

Another historical factor, Keller noted, is that health insurance in the U.S. is still predominantly employer-based, unlike the nationalized systems in Canada and the UK. Sure, employers can purchase add-on dental and vision plans if their pool of employees is big enough to make the plans cost-effective. But individuals who try to buy their own dental riders find that insurers tack on long waiting periods to foil consumers who are just trying to cover that root canal surgery scheduled for the following week. As Keller put it, "You can't buy insurance on your house if it's on fire."

Still, don't insurance companies ultimately reap the benefits of preventative care? Not in a fee-for-service model, Keller said, where cost savings in one area aren't readily transferable to others. Other health care models, such as that of Kaiser Permanente, take a more logical approach. Because Kaiser owns the hospitals and has doctors on salary, Keller explained, if the consortium sees more tooth abscesses coming through its ERs, it can invest in oral screenings to reduce that number.

Blue Cross Blue Shield of Vermont is the state's largest health insurance provider, covering roughly three out of four Vermonters. Asked why its basic plan doesn't include dental and vision care, Sara Teachout, BCBSVT's director of government, public and media relations, said she hears that question "all the time."

Teachout acknowledged that the reasons are more historical than rational — "pretty much like everything else in health care," she said. She noted that companies like hers typically follow the lead of Medicare and Medicaid.

In short, BCBSVT recognizes the human and cost benefits of creating an integrated health care model that includes dental, vision and mental health services and the like.

"But we're all very, very slow at changing the way we approach health care," Teachout said. "We know that integration is the way to go, but dental and vision are probably not [going to be] first on the list."

To quote President Donald Trump, "Nobody knew health care could be so complicated" — except anyone who's ever looked into it.