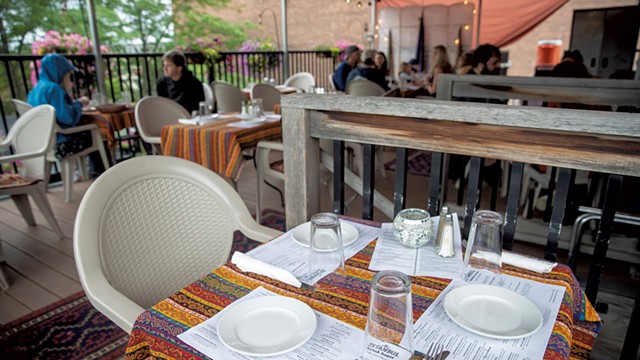 When the Oktay family moved their restaurant, Istanbul Kebab House, to Burlington in 2014, they landed in the former Das Bierhaus at 175 Church Street. They considered the building's rooftop dining area "a bonus," co-owner Jackie Oktay said.

"It's great to be the only rooftop; you can market that," Oktay said.

Istanbul Kebab House's rooftop remains relatively low profile, however, perhaps because people imagine that rooftop dining in Burlington will include a vista of Lake Champlain. "I do wish we had a lake view," Oktay conceded.

That's what Jim Stover of Shelburne was looking for when he emailed Seven Days. "Why doesn't Burlington have rooftop restaurants?" he queried. "There would be some nice views."

David White, the City of Burlington's director of planning, agrees. "It's something that we have tried our best to encourage, seeing how popular and successful it is in other places and the incredible views we have to offer," he said.

Stover hoped such dining areas might "pop up" this summer, he wrote, but it's not as simple as throwing some tables and chairs on a roof.

Istanbul Kebab House's rooftop terrace was part of its building's original design. While White said the zoning code has "nothing specific that is going to prohibit" adding seasonal dining to an existing restaurant roof, the hurdles are many.

"First, you've got to have a flat roof," White said, noting that many older buildings have pitched roofs for drainage. The second concern: "Can you physically support it?" A "live load" of people requires a different level of structural integrity from snow "that just sits there," White explained. And then, he added, "Can you get people to it?" For customer and server access, "you've got to have more than a manhole cover to the roof."

Oktay knows the logistical issues firsthand. Like most downtown restaurants, Istanbul Kebab House has no elevator and a first-floor kitchen. Every summer, she hires a few "young, energetic runners" who make constant three-flight trips, ferrying food up and busing dirty dishes down. "The people who get into those positions either last a week or they love it," she said. "It's very tiring."

City building inspector Kim Ianelli explained that any new public dining area — in or on a building — must meet the Vermont Fire and Safety Building Code, which exists to keep people safe and ensure that they can exit a building quickly if needed.

"I don't want people hanging out on just any old roof," Ianelli wrote in an email. Generally, she indicated, "there is a way to make them safe for people, but it would require a design professional to assure all codes are being met [and] structural analysis to assure the building can handle the load."

Solomon Bayer-Pacht knows how tough it can be to meet those requirements. The restaurateur, who co-owns the Farmers & Foragers food truck, has long dreamed of a downtown rooftop destination. He worked for more than a year with architect Tyler Scott of Essex Junction on rooftop restaurant designs for Karma Bird House at 47 Maple Street.

The building, Bayer-Pacht said, offered "a full view not only to the water but back up the hill. Once you're up there, there's no better place to be."

Plans for a 7,000-plus-square-foot space included a bar and lounge, as well as seated dining in a mostly glass exterior with an outdoor deck. The restaurant would have served about 140 patrons and boasted its own elevator.

Then Scott learned that code would allow the building, which was made with heavy timber construction in the early 20th century, to host only 50 people on the roof. Bayer-Pacht put his dream on hold.

What about the hotels that have sprouted in Burlington in the past couple of decades? Aren't rooftop restaurants a natural fit?

"In developing urban hotels, a rooftop food-and-beverage venue is always on the table," said Jay Canning, founder of Westport Hospitality. He's the developer-operator of three Burlington-area hotels, including Hotel Vermont and the Courtyard by Marriott Burlington Harbor.

Canning regrets having cut a rooftop restaurant from the Courtyard project. But, he said, restaurants are often kicked off the priority list by factors such as cost and large HVAC components requiring roof space.

Longtime locals may remember a rooftop restaurant called Mather's that Canning co-owned and operated for three years in the mid-1980s on the eighth floor of 7 Burlington Square at Pine and Bank streets. The 7,200-square-foot space offered fine dining, a piano bar and a private function room. Mather's closed because a business tenant "coveted" the top floor, Canning said.

Hotel Vermont's Juniper restaurant does have a terrace with a sliver of lake view, but it's no rooftop. Canning pointed out that Brick, the outdoor restaurant between his two downtown hotels, occupies a parking garage roof — but that doesn't quite count, in our opinion.

If he develops another downtown hotel, Canning said, "You can bet it will include a rooftop scene."

All of this adds up to unfortunate news for Stover: He might have to wait until 2023 for elevated lake-view dining.

That's the updated completion date for the Hotel Y, planned for the former location of the Greater Burlington YMCA on College Street. Its design features a sixth-floor, west-facing restaurant and bar with seasonal outdoor seating that will "take fantastic advantage of city views, as well as lake views," promised the hotel's developer, Scott Silver of Florida-based Hospitality Funding.

Silver, a University of Vermont alum with a son who lives in Burlington, saw an opportunity to stake a claim in the rooftop restaurant sector. As for the food, "Our lead idea is some type of Asian fusion," he said.

Plans for the stalled and embattled CityPlace Burlington development also include a rooftop restaurant — but we're not counting on that one.