WTF: Why does a perpetual gas flame burn near I-89 in Moretown? | WTF | Seven Days | Vermont's Independent Voice

WTF: Why does a perpetual gas flame burn near I-89 in Moretown? 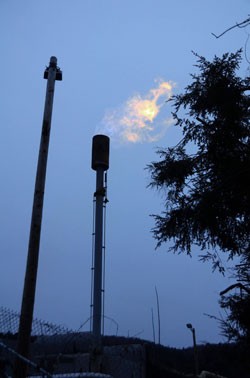 Commuters who routinely travel the stretch of Interstate 89 between Waterbury and Montpelier may have occasionally been jolted out of their subconscious driving trance by the sight of a large, perpetual flame burning just north of the Middlesex exit. The blaze isn’t always visible during daylight hours, as one reader observed recently, but at night it seems to hover in midair like some disembodied Olympic torch.

Vermonters should be thankful that such industrial flares aren’t common features on the Green Mountain landscape. Drive certain stretches of the Jersey Turnpike or I-10 between Houston, Texas, and the aptly named Sulfur, La., and you’ll see — and smell — dozens of them undulating in the breeze high atop sprawling oil-refinery complexes. These torches cast their eerie orange glow into the night sky, creating a dystopian panorama that seems lifted straight out of a Mad Max film.

Gas flares, or flare stacks, as they’re known in the industry, are used for the disposal of excess methane gas. The gas flare along I-89 belongs to the Moretown Landfill, one of two commercially owned landfills in Vermont. (The other is in Coventry.)

Tom Badowski is general manager of the Moretown Landfill, which takes in about 150,000 tons of waste each year. (For some perspective, the average Vermont home generates about a ton of trash per year, he notes.) Methane is a natural by-product of the decomposition of all that waste. At the landfill, the gas is then captured through scores of horizontal and vertical gas-collection wells that have been drilled into the landfill. “The main reason we capture it,” Badowski explains, “is for odor control.”

Can’t all that natural gas be put to good use? Actually, Badowski points out, it is. Since 2008, the Moretown landfill has been generating 3.2 megawatts of electricity from methane — about enough to light 2800 homes — each year.

“We’ve gotten so good at our [methane] collection that we now have more gas than we can make electricity out of,” Badowski adds. As a result, the company is applying to the Vermont Agency of Natural Resources (ANR) for a permit to install a third gas-to-energy engine on the property. Badowski expects a permit will be issued later this year, with additional electricity generation starting sometime in 2013.

Since July 2005, the Washington Electric Co-op has operated a similar gas-to-energy operation in Coventry at Vermont’s largest landfill. That facility is owned and operated by NEWSVT, a subsidiary of Casella Waste Management of Rutland. Its electricity-generating plant has also been growing and now has five gas engines producing eight megawatts of power.

But why does some of the methane need to be burned off in the open air? Adam Sherman is program director in the biomass fuel supply department of the Montpelier-based Biomass Energy Resource Center. As he explains, methane isn’t generated in landfills at a steady rate, but one that varies depending on the composition of the garbage. Throw away some wilted cabbage, waterlogged books or a mold-tainted loaf of bread, and you’ll get plenty of methane. Throw away an old bicycle or broken toaster? Not so much.

When methane is allowed to vent into the atmosphere, it doesn’t just stink like rotten eggs and piss off the neighbors. It also contributes to smog and global warming and creates public health and safety concerns. According to the U.S. Environmental Protection Agency, landfills are the third largest source of human-related methane production, and contributed about 17 percent of all methane emissions in the United States in 2009.

Another major methane source? Ruminant digestion. According to the EPA, cow belches and flatulence account for 5.5 million metric tons, or about 20 percent, of all U.S. methane emissions. Can you say, “Pull my hoof”?

When the gas pressure generated at a landfill exceeds the rate at which engines are designed to collect and burn it, the facility must do something with the excess gas other than release it into the atmosphere. As Sherman points out, methane is a greenhouse gas at least 22 times more potent than carbon dioxide. So the preferred method of disposal is to burn it off and convert it to heat, water and CO2. For safety reasons, excess methane cannot be easily stored and burned later. Flare stacks simply serve as a pressure-relief value to prevent explosions or other damage to the gas-collection equipment.

Incidentally, if you ever noticed a funky smell as you drove by the Moretown Landfill on Route 2 or I-89, it was due to some initial snafus and fine-tuning during the start-up of the gas-to-energy system. According to ANR, its solid waste program has been working with the air pollution control division to resolve the problem, and complaints appear to have subsided.