Why Do Yellow Grins and a 'GUMP' Bench Greet Drivers in Essex Junction? 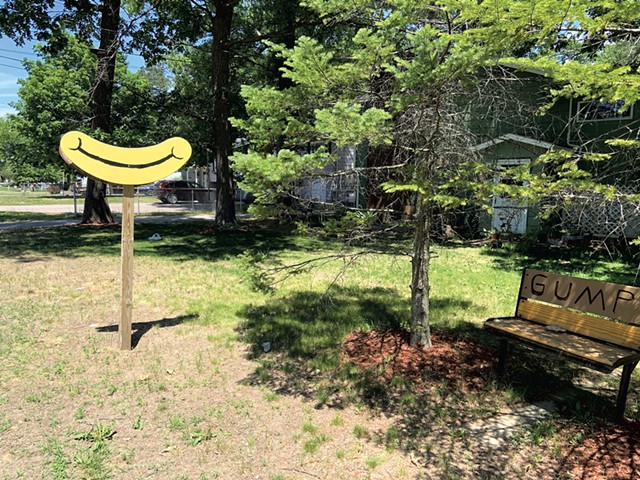 In these "difficult times" — as every TV commercial describes this year's perfect storm of pandemic, lockdown, police violence and street demonstrations — we can all use a smile to brighten our days. But even before COVID-19 became a household word, two yellow grins have been beaming at passersby on West Street in Essex Junction.

The curved wooden mouths, which face in both directions of traffic near the Essex community gardens and dog park, bear no words or other symbols. They just hang there at the top of a wooden post, like a pair of smirking Cheez Doodles. Some days the mouths are upturned in a smile; other days they're frowning. Periodically, the signs split the difference, with a frown facing one direction and a smile facing the other.

Equally puzzling is the wooden park bench about 10 feet away with the name "GUMP" etched into it. On a recent visit, the bench, which is nowhere near a public bus stop, had a heart-shaped box of chocolates on it — a reference, presumably, to the 1994 Oscar-winning film Forrest Gump, starring Tom Hanks.

Are these wooden creations forms of public art, political statements, social commentary or none of the above?

Turns out, they're more like mood rings for their creator — Essex Junction native Richard Burnett. The 59-year-old carpenter, who owns the West Street duplex where these symbols are located, said that initially he made them as a way to respond to his life's trials and tribulations. Lately, however, they've come to reflect his personal sentiments on whatever is happening in the world that week.

About a year ago, Burnett explained, he was walking his dog at the Champlain Valley Exposition and discovered a discarded picnic table with two benches, each cut in the shape of a comma. Looking to repurpose the seats, he took them home, painted them yellow and black like the classic smiley face, and hung them on a post in front of his house.

Initially, Burnett faced a frown in the direction of drivers heading into Essex Junction and a smile facing those traveling away from it. Why?

"When people are heading down to GlobalFoundries," he said, referring to the computer chip manufacturer about two miles away, "they're frowning on the way to work and smiling on the way back."

Last year, he recalled, a childhood friend visiting from Arizona pulled out his cellphone and showed Burnett photos of the smiles and asked him what they were all about, not realizing that Burnett himself had made them.

More recently, a woman walking to the nearby dog park noticed frowns facing in both directions and inquired about them.

"I said, 'Well, I'm really upset about something going on in the world,'" he said. Burnett explained that he was irked that protesters in San Francisco had pulled down a statue of Francis Scott Key, author of "The Star-Spangled Banner" and also a slave owner. "The world's kind of crazy right now, and it hurts when you see all this stuff happening."

So what's the story behind the GUMP bench? That creation, Burnett continued, is a remnant of a painful breakup with a girlfriend of 10 years. At the time, he said, he felt a little like the eponymous movie character, who marries but ultimately loses the love of his life, Jenny.

Evidently, some of Burnett's neighbors have been intrigued by his work. After the pandemic hit, he noted, a woman and her kids began painting messages on small rocks and leaving them on the bench. One featured a quote from the film: "You have to do the best with what God gave you." It was signed "Mrs. Gump" and had a little Bubba Gump shrimp painted on it.

"I thought that was pretty cool," Burnett said.

Then, a few months ago, after Burnett and his ex tried but failed to reconcile on Valentine's Day, he left the heart-shaped candy box on the bench, a nod to the film's most quoted line: "Mama always said life was like a box of chocolates. You never know what you're gonna get."

"It's kept me busy, and I guess it's a way of me venting my pain," Burnett said about his lawn creations.

Burnett noted that he gets more inquiries about the grins than the less-visible bench. For a time, they became topics of discussion on his local Front Porch Forum. Burnett's explanation is pretty straightforward.

"The world tries to beat you down," he said. "This is just my signal to the world that I'm not going to let it."