Why Do So Many Apple Trees Grow Along Vermont's Back Roads? | WTF | Seven Days | Vermont's Independent Voice

Why Do So Many Apple Trees Grow Along Vermont's Back Roads? 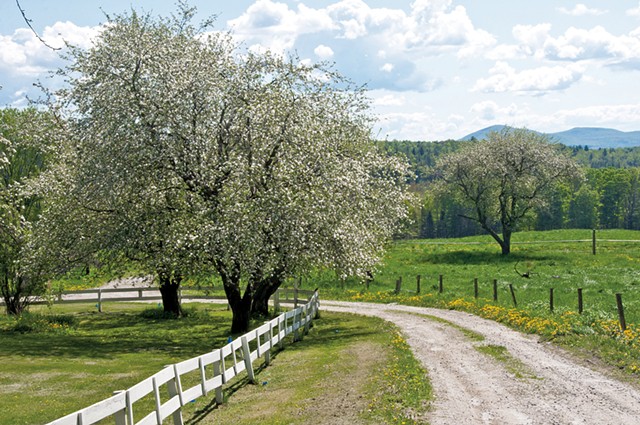 Drive or bike Vermont's back roads, especially in farm country, and you're likely to spot an abundance of apple trees growing along untended roadsides and abandoned hedgerows. Bob Gagne of Westford noticed as much and asked if we could explain how those fruit trees got there.

"I have asked many people all over the state and haven't found a consistent answer," Gagne wrote in a recent email. "Many are as perplexed as I am."

Terence Bradshaw has been asked that same question numerous times before, and he's heard several theories — most of which were wrong, he said — about how and why Vermont's roadside apple trees came to be. A tree fruit and viticulture specialist for the past 25 years, Bradshaw is a research assistant professor of specialty crops in the University of Vermont's Department of Plant and Soil Science. When New England orchardists and cider makers have questions about their pommes, often he is the guy they call for answers.

Bradshaw was more than happy to dispel a couple of common myths about the origins of Vermont's roadside apples. The first is that those trees were planted by farmers as a way of feeding their neighbors and of sharing their agricultural bounty, especially during lean economic times.

While that theory seems to jibe with Vermonters' self-image of Yankee ingenuity, community-mindedness and a general love of trees, according to Bradshaw it has no historical or botanical basis. One need only take a bite from one of those roadside apples to discover why: Almost invariably, they're small, hard and bitter — nothing like the round, sweet and juicy table apples shoppers can find in their supermarket produce section.

Apples, Bradshaw explained, are "highly heterogeneous," meaning that whenever they produce fruit out in nature — when an insect carries pollen from one tree to fertilize the flower of another — their genes get all mixed together.

This genetic "shuffling of the deck," he said, removes most of the palatable traits that humans bred into domesticated apples for generations, including their redness, sweetness and juiciness. Though roadside apples may have some edible qualities, he said, genetically speaking "the apples we eat as fruit are one in a thousand."

The second theory Bradshaw often hears is that Vermont's roadside apple trees are remnants of groves that were planted decades ago by Vermont cider makers. That theory may derive, in part, from Michael Pollan's 2001 nonfiction book, The Botany of Desire: A Plant's-Eye View of the World.

In it, Pollan devotes a chapter to the legend of Johnny Appleseed and its roots in the historical figure upon whom it was based: John Chapman (1774-1845). Far from being the wholesome tale of a pioneer nurseryman who wandered the West planting apple trees for future generations of teachers' pets, Chapman actually became legendary for spreading the blessing of booze to the American frontier. Talk about core values.

However, as enticing as it may be for 21st-century craft cider makers to link feral apple trees to their 19th-century predecessors, Bradshaw nipped that one in the bud, too. Most of Vermont's cider apple groves, he noted, were planted around the turn of the 20th century and were cut down during Prohibition a century ago. Those that weren't, he added, would be dead by now.

"I have collected hundreds of trees of road apples ... and they are almost never a cultivated variety," Bradshaw said. "They're almost always a feral tree."

Bradshaw distinguishes between "feral" apples and "wild" ones, the latter being native species. And how many native species of apples grow in Vermont? None, he said. What we call apple trees — Malus domestica — have genetic roots stretching back to Kazakhstan, and they were crossbred over generations before being brought to Vermont.

"It's like cows," he added. "You can't find their wild relatives anymore. They're gone."

Which is not to suggest that the feral apples growing along Vermont's highways and byways are unusable. In recent years, there have been efforts to put some of that roadside fruit to good use. Notably, in 2013 Shoreham-based cider maker Shacksbury launched its Lost Apple Project, which sampled thousands of apples from around the state and chose about a dozen to propagate for fermentation.

"You can fill a cider barrel with all sorts of funky fruit," Bradshaw said. "Fermentation does its magic and makes stuff you wouldn't eat but you can drink."

Whether any of those apple varieties were ever given a name, he added, would require a historian, as well as a horticulturalist. And it's not like the fruit can be DNA tested, because there's no genetic frame of reference dating back to the late 1800s.

So where did all those roadside apple trees likely originate? According to Bradshaw, some may have sprouted from apple cores tossed from the windows of passing vehicles, which then took root in places that don't get mowed. Others may have grown from the seeds of cider apple trees that died decades ago.

"The ones you see on the side of the road are the children and grandchildren of those trees," Bradshaw explained. "Usually, they're from something a deer pooped out."

Hey, they don't call them "spitters" for nothing.