WTF: Why Did the Family Behind Seventh Generation Launch an Eco-Friendly Condom? 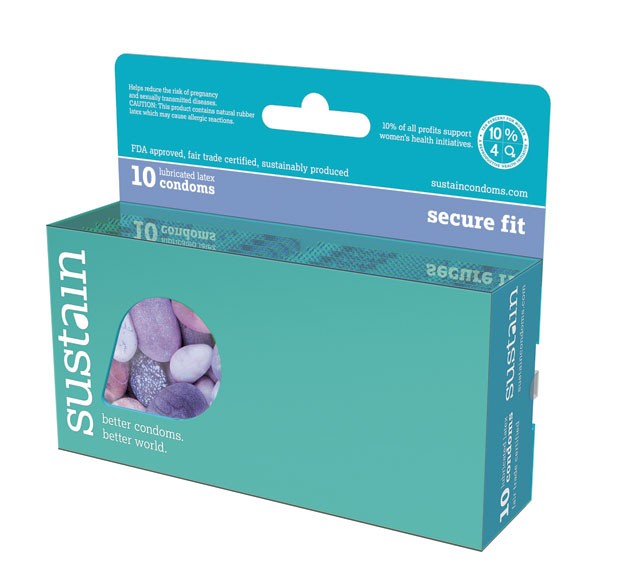 Coming soon to a health food store near you is the latest Earth-friendly product from a guy who once mass-marketed sustainable and nontoxic diapers, detergents, toilet paper and other household consumer goods.

This product, unlike the others, will be worn exclusively by men but marketed primarily to young women of the Millennial generation. It’s the first-ever Fair Trade-certified, organically sourced, vegan, nontoxic, non-animal-tested and GMO-free prophylactic. Known as the Sustain condom, it could revolutionize rubbers forever.

A boner with a conscience? WTF? Does the world need a new approach to condoms? And why market them specifically to young women?

Sustain condoms were the brainchild of Jeffrey Hollender, the 59-year-old entrepreneur who cofounded Burlington-based Seventh Generation in 1988. More accurately, Sustain is a family project created by Hollender and his 26-year-old daughter, Meika, a recent business school graduate of New York University. This is the father-and-daughter duo’s first business venture together.

The elder Hollender, who grew Seventh Gen into a $150 million-a-year business before he was forced out as CEO in 2010, says he launched the project after realizing he was “a failure at retirement.”

“Starting and running businesses is what I love to do most, and I felt there was a lot of unfinished opportunities, particularly when it comes to the role businesses play in society,” Hollender explains. “While there’s been a lot of good work by a lot of companies, at the end of the day we really haven’t come close to reaching the tipping point where businesses are solving more problems than they’re creating.”

Evidently, that’s as true for condoms as it once was for cleaning products. Twenty years ago Hollender trademarked the name Rainforest Rubbers with a plan to market eco-friendly jimmies made of sustainable rubber harvested from the Amazon, without the use of toxic chemicals or child labor. That product never materialized, and Hollender turned his focus to Seventh Generation.

The goal of the newly created Hollender Sustainable Brands, which makes Sustain condoms, he says, is to be a “net positive” business that plays a “regenerative” role, both socially and environmentally, rather than just being “less bad” than traditional companies.

Sustain takes that ethos to the next level. The Hollenders found an organic, family-owned rubber plantation in southern India that is certified by the Forest Stewardship Council for preserving biodiversity, sequestering carbon and mitigating climate change. The plantation also pays its workers “premium wages,” offers free health care at its own hospital and provides free schooling to all workers’ children.

Next, the Hollenders identified a family-owned, unionized condom factory, also in southern India. It, too, pays its workers “significantly” higher wages than others in the region, Jeffrey Hollender says.

From a health standpoint, Hollender expects one big selling point of Sustain condoms to be the absence of measurable nitrosamines. A 2012 study published by the Chemical and Veterinary Investigation Office in Stuttgart, Germany, found that 29 of the 32 condoms it tested contained N-nitrosamine, a carcinogenic compound. While Germany’s social ministry reassured consumers that those chemicals don’t pose an imminent health risk, it advised manufacturers to seek safer alternatives.

Finally, Hollender emphasizes that his daughter is leading the marketing campaign, which is aimed at women in her age group. Although females make up about 40 percent of all condom purchases, he notes, most condom ads target young male consumers — and their engorged egos.

For example, ads for the Durex brand often emphasize that they come in an XXL size. That may boost sales, but it does little to improve the product’s reliability. Hollender says a major complaint he and Meika have heard from women about condoms is that men buy too-large sizes that fall off. Moreover, women are often reluctant to buy a properly sized (i.e., small) condom, fearing it will offend their partners. To that end, Sustain comes in a “secure fit” size that, Hollender asserts, is less likely to create bad blood in the boudoir.

“We want to change the experience of being embarrassed when women buy condoms to something they feel proud about,” he adds. “You go into a store and buy organic food, and you feel great that you’re taking good care of yourself. It’s terrible that young women, and men, feel embarrassed about doing something that is critical to their health.”

Indeed, condom use is actually down among Millennials. In a September 2013 article for New York Magazine, Ann Friedman describes sexually active, hetero twentysomethings as the “Pullout Generation” for eschewing condoms (and other reliable birth-control methods) in favor of period-tracking apps and wishful thinking.

Not surprisingly, then, the Centers for Disease Control and Prevention report that about one in four college students now has a sexually transmitted disease. Hollender theorizes that Millennials’ condom aversion, beyond the usual gripes, may be due to the fact that they were born after the height of the AIDS epidemic, when condom use soared.

Alas, despite all efforts at conscientious coitus, the Sustain, which hits shelves this spring, lags on one front: The lubricant is neither natural nor organic, because the FDA has yet to approve one. Hollender insists they’re working on it.

Finally, the Sustain condom offers no assurances about erectile sustainability. Sorry, fellas, but for that, you’re on your own.