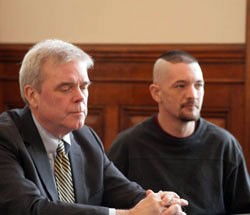 Superior Court Judge Helen Toor can’t say whether she’s seeing more defendants entering her Middlebury courtroom with a traumatic brain injury — or if she’s just noticing them more. She can say, however, that if the accused is found incompetent to stand trial because of a TBI, there’s not a lot she can do with them.

“The state is required to dismiss the charges under our laws,” says Toor, who’s been a judge for 14 years and now presides over Addison County’s criminal division. “And yet, we don’t have a process for monitoring that person to try to avoid future criminal conduct.”

In the last few months, Toor has had to dismiss charges against defendants accused of aggravated assault and repeated stalking because they had TBIs that might explain their inappropriate or violent behavior. In a third case, Toor has yet to rule on the competence of a brain-injured defendant charged with the sexual assault of a child.

This situation differs from other cases involving defendants deemed by the court to lack a rational understanding of the charges, proceedings and their potential consequences. If a defendant has a severe mental illness, such as schizophrenia, a judge may commit that individual to a psychiatric ward for treatment. If it’s effective, he or she may be found competent to stand trial down the road.

A judge can also issue an “order of nonhospitalization,” putting the person under the supervision of a state-funded community mental health facility, such as the HowardCenter in Burlington or the Counseling Service of Addison County. Defendants with developmental disabilities, such as Down syndrome, can be placed under the supervision of the Department of Aging and Independent Living, which presently supervises about 30 Vermonters who have committed violent and/or sexual offenses, according to Commissioner Susan Wehry.

But a TBI is neither a mental illness nor a developmental disability. As a result, Toor asked the Brain Injury Association of Vermont (BIA-VT) to visit her court last week to provide guidance and training to Addison County attorneys who are trying to figure out how to deal with brain-injured defendants once they leave the courtroom.

How common are TBI victims in the criminal justice system? Brain injury experts say they’re much more common than the public or court personnel realize.

Remember Roger Pion, the Newport farmer who became an internet folk hero last year for crushing seven Orleans County sheriff’s vehicles with his monster tractor? It was widely reported at the time that Pion was enraged about his recent marijuana arrest. But Pion’s defense attorney, David Sleigh, now confirms that the court ruled his client was not competent to stand trial, in part because of a history of concussions.

The Office of Court Administrator cannot say how common such cases are. In 2012, there were 772 cases statewide involving “the potential to include a competency issue.” But the judiciary’s decades-old computer system doesn’t gather data on defendants’ mental status or the reasons why some are deemed incompetent.

Defender General Matt Valerio, who oversees Vermont’s public defenders, admits he’s unaware of the extent of the problem. In his 25 years in the criminal justice system, Valerio says that cases involving defendants with obvious TBIs have been “few and far between.” If Vermont’s public defenders are representing brain-injured defendants, he says, those cases aren’t coming to his attention.

Last year, the legislature asked the Vermont Department of Corrections to compile a report on the number of inmates suffering from a “severe functional impairment,” which can include dementia, mood or personality disorders, psychoses and TBIs. As of September, 121 offenders in state custody were known to have severe functional impairment. Only two were on the list for a known TBI.

But that same report also indicates that although the number of TBI cases looks small, “It may be because it’s not commonly assessed in screenings, and patients may not report trauma that they don’t associate with current presentation.”

Screening for TBIs, especially mild ones, is difficult, expensive and not done routinely by the Department of Corrections or Probation and Parole. And TBI experts suggest that many inmates don’t realize that the root cause of their antisocial behavior is a blow to the head they received years ago.

“We’ve actually known this is a huge issue for some time now,” says Trevor Squirrel, executive director of BIA-VT. “Traumatic brain injury is very present in the criminal justice system. The problem is, it tends to not get identified.”

Squirrel points to a 2006 report from the U.S. Centers for Disease Control and Prevention called Traumatic Brain Injury: A Guide for Criminal Justice Professionals. That report indicates that between 25 and 87 percent of all prison inmates nationwide reported a head injury or TBI, as compared to just 8.5 percent of the general population.

The CDC found that inmates who report head injuries are more likely than other inmates to have disciplinary problems during their incarceration, as well as seizures, substance-abuse problems and mental health issues such as anxiety and suicidal tendencies. Among male inmates, a history of TBI was “strongly associated” with domestic violence and other violent crimes.

Recidivism rates are also higher among TBI victims. Barb Winters, BIA-VT’s education and outreach coordinator, says that’s because those with brain injuries often have trouble understanding and abiding by the conditions of their release.

“If you don’t have an understanding of brain injury and you tell someone with a TBI that they need to be here by two o’clock every day for a urinalysis and they forget, then all of a sudden they’re back in jail,” Winters says. “Poor decision-making on the part of an individual with a brain injury is probably what led them into the correctional system to start with.”

Bob Luce, a trial lawyer with the Burlington firm Downs Rachlin Martin, specializes in civil lawsuits involving brain and spinal-cord injuries and is a founding board member of BIA-VT. He’s the attorney Toor approached for help on this subject, and he participated in last week’s training session.

Luce says it’s no coincidence that young males 15 to 25 years old are the population with the highest number of TBIs — the same demographic most likely to end up in the criminal justice system. Most TBIs result from sports injuries, falls and car accidents, Luce says, and are likely to injure the frontal lobe. That’s the part of the brain associated with executive functions such as empathy, judgment, self-awareness, compassion, and a sense of right and wrong. Or, as Luce puts it, the “whole ability to put yourself in someone else’s shoes.”

If public defenders haven’t encountered defendants with TBIs, criminal defense attorneys certainly have. About five years ago, Sleigh says, defense lawyers began researching the psychological impacts of TBIs, fueled in part by the growing number of vets returning from Iraq and Afghanistan who were later charged with violent offenses.

According to Sleigh, he’s had as many as a dozen cases in the last several years in which evidence about the defendants’ TBI was used as a defense — though none was a combat veteran. One recent case involves what Sleigh describes as “monstrous behavior” — a man accused of assaulting and raping members of his own family. Sleigh declined to identify his client.

Ordinarily, Sleigh says, a crime of such magnitude would result in a lengthy prison term of 25 years to life. His client served only 30 days in jail and was then ordered to receive ongoing treatment and supervision. Says Sleigh, “It resolved the case in a way favorable to my client that would not have happened otherwise.”

Is the TBI defense just another way for defense attorneys to get their clients off? Sleigh doesn’t think so.

“I look at it as just another box on the checklist I have to examine that I wouldn’t have thought of doing,” he says.

Luce agrees. While he doesn’t represent clients in criminal proceedings, he has had brain-injured clients who later ran afoul of the law. In the end, medical evidence about the TBI “changed the filter” through which prosecutors viewed the cases and ultimately influenced the terms of their plea agreements.

Advocates like Squirrel and Winters emphasize that the vast majority of TBI sufferers are nonviolent and don’t break the law. For his part, Luce hopes that with increased attention being paid to concussive injuries — both in sports and in combat — doctors will be more likely to take TBIs seriously and treat them early, before “things spiral downward.”

Toor says last week’s BIA presentation was both informative and interesting. She says she learned there’s a Medicaid program for individuals with brain injuries, which can provide wraparound services of the kind Toor is seeking; about 70 such slots are allocated in Vermont.

But in addition to being Medicaid eligible, those individuals must have “moderate to severe” brain injuries sustained within the last five years. Toor says none of the defendants that have come before her meet those qualifications.

That leaves Toor and other judges little choice but to dismiss cases against brain-injured defendants — until the law catches up with the unusual circumstances of those who stand before her.