Why Bernie Should Run: Sen. Sanders and the 2016 Presidential Campaign 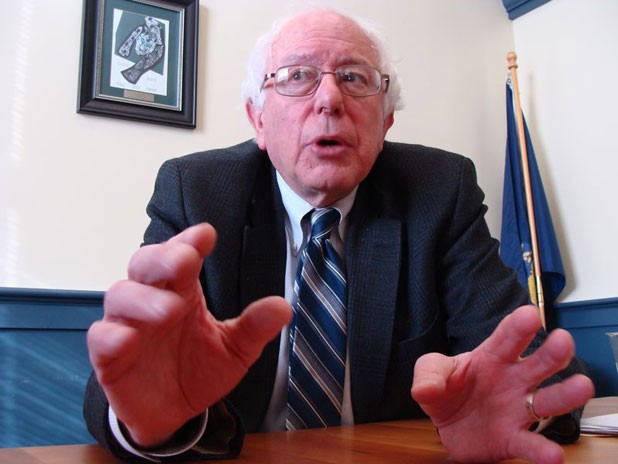 Among Sen. Bernie Sanders’ most fervent followers, a constant refrain prevails: Why doesn’t he run for president in 2016?

Sanders tried to put that question to rest for the thousandth time in this month’s Playboy magazine, for which he gave an interview to the liberal activist and occasional political candidate Jonathan Tasini.

“Well, the answer is that to run a serious campaign, you need to raise hundreds of millions of dollars,” Sanders said, a feat accomplished by Barack Obama only because he “went to his friends on Wall Street.”

That reality aside, Sanders continued, “I think people are hungering for a voice out there. It would be tempting to try to raise issues and demand discussion on issues that are not being talked about: inequality in wealth and trade policy, protecting the social safety net, moving aggressively on global warming.”

So why doesn’t Sanders himself feed that hunger and demand that discussion? Politically speaking, there has never been, and will never again be, a better time for Sanders to run for president than in 2016.

With Hillary Clinton almost certain to enter the race, all but a few brave contenders — such as Maryland Gov. Martin O’Malley — will clear the Democratic field for her. That will leave an enormous void for a challenger from the left to fill.

And as Sanders made clear to Tasini, he believes someone should do it. Asked whether another Clinton candidacy “offer[s] an alternative to the country,” Sanders replied, succinctly as ever, “No, it does not.”

Whether you agree with his vision or not, Sanders would certainly offer quite the alternative to Clintonian triangulation and poll-tested circumspection. His Ahab-esque focus on the white whale of income inequality would surely resonate with Democratic primary voters much like John Edwards’ did back in those halcyon, pre-Rielle Hunter days.

It would also resonate with the Beltway’s horse-race-obsessed media machine, which, like your local political columnist, will be desperate to come up with credible narratives and counter-narratives over the next 36 months — particularly if Clinton saps the suspense out of it. You simply can’t invent a better foil for her than the crazy-haired, Brooklyn-accented, self-styled socialist from the Independent Republic of Ben & Jerry’s.

“I think Bernie Sanders has enough regard nationally and name recognition and enough history on important issues that he could get into the debate,” Nichols says. “It would be real, and he could be taken seriously.”

Over the years, Sanders has cultivated a national, small-dollar fundraising network that brought in 146,460 contributions from about half as many people during his last six-year election cycle.

The only members of Congress with more combined social-media followers than Sanders’ 539,000, according to OhMyGov, are four who might run for president in 2016 — Sens. Ted Cruz (R-Tex.), Marco Rubio (R-Fla.), Elizabeth Warren (D-Mass.) and Rand Paul (R-Ky.) — and one who’s run twice before: Sen. John McCain (R-Ariz.).

Just last week, he managed to draw audiences north of 200 on an improbable tour to Alabama, Georgia and South Carolina, according to South Forward super PAC executive director Jay Parmley, who organized the events.

“People were just overwhelmingly grateful that he would take the time to come,” Parmley says.

Yes, Sanders already has quite the national audience — thanks in part to his omnipresence on cable television, where liberal talk show hosts such as Ed Schultz routinely slobber all over him (Schultz introduced Sanders last Friday as “the independent pit bull from Vermont”). But the sad fact of modern political life is that nobody in America garners more attention than crazy people who run for president — or at least pretend they’re going to.

Sanders himself has said that his raison d’être is to spread the gospel of income inequality — a calling that would meet with far greater success if he had a bus full of campaign embeds tailing him from Iowa to New Hampshire.

“Nobody understands how bad it is,” he told Seven Days in a March interview. “That’s why I think if I were on television or radio 24 hours a day saying nothing else other than that, it would be a contribution.”

That chat, it should be noted, was the last time Sanders agreed to be interviewed by Seven Days — evidence that he’s already acquired a presidential disregard for local media.

While Sanders might enjoy the attention of a 2016 run, his friend Thom Hartmann, the progressive radio host, says, “He wouldn’t want to end up being seen as the vanity candidate or the fringe candidate or something like that — because that’s not Bernie. That’s not who he is. Which is why I’m guessing he won’t do it.”

Another reason: He’d have to run in the Democratic primary to avoid being marginalized and labeled a “spoiler” — and though he caucuses with Senate Democrats, he seems to despise having that ‘D’ next to his name.

Hartmann is probably right. Sanders likely won’t run, as the independent pit bull from Vermont told Tasini when asked if he was “100 percent” ruling it out.

“Absolutely? 100 percent? Cross my heart? Is there a stack of Bibles somewhere? Look, maybe it’s only 99 percent,” Sanders said. “I realize running for president would be a way to shine a spotlight on these issues that are too often in the shadows today. [Pauses.] But I am at least 99 percent sure I won’t.”

If he did run, Sanders would surely lose the race. But he’d win the opportunity to reach many more Americans than he ever will on MSNBC. And for a lifelong progressive warrior in the twilight of his career, it might just be worth it.

But now Donovan says he’s “considering” challenging Sorrell for a second time after being inundated with “calls of encouragement over the last several days.”

The message the Chittenden County state’s attorney is hearing from his acolytes?

“That I should run,” Donovan reports.

The 39-year-old, two-term county prosecutor raised eyebrows last year when he challenged Sorrell in the Democratic primary — and nearly beat him. Donovan’s allies had hoped Sorrell’s close call would convince the 66-year-old to retire when his two-year term expires next year, but the AG made clear during an appearance on WDEV’s “The Mark Johnson Show” last Thursday that he’ll run again.

“I’m working on some great issues that I think are important, and I’ve got plenty of energy for it,” Sorrell told Seven Days later that day.

Sorrell said the 2012 race made him a “smarter candidate,” but he declined to weigh in on a second Donovan bid, saying, “I’m not gonna go there.”

For his part, Donovan says he’s still considering the “professional and personal” implications of running. Unlike last time, he’d have to sacrifice his old job to run for a new one, since his current four-year term ends in 2014.

“The question is, can I do more from a professional position for the state than in this spot?” Donovan asks.

If he answers that question the same way he did two years ago, expect another lively race.

A month to the day after a gunman killed 26 students and teachers at a Connecticut elementary school, last December Burlington Mayor Miro Weinberger did something highly unusual for an ambitious Vermont politician. He provoked a fight over gun laws.

“As the father of a first-grader and as a mayor who gets one of the first calls when someone is shot in this city, I feel a deep responsibility to join the loud call for action now to protect our children and communities from illegal guns,” he said at the January presser.

Two months later, the gun control group featured hizzoner and 29 other mayors in a national television ad calling for an assault weapons ban.

But since then, Weinberger has apparently changed his mind.

“After careful consideration, I have decided to oppose a local assault weapons ban and creation of a new city concealed carry permit because I doubt the effectiveness of these measures and because these two particular reforms would create a patchwork of local regulation that would be problematic for responsible Vermont gun owners.”

Why the change of heart?

During a brief recess at Monday’s meeting, Weinberger first claimed he’d only ever backed a federal assault-weapons ban.

“The stand I took with Mayors Against Illegal Guns was weighing in on national background checks, the assault-weapons ban and trafficking of firearms,” he said. “Those were national measures.”

Actually, when Weinberger appeared before the city council’s charter-change committee last May, he explicitly endorsed a local ban, saying, “You are on strong legal ground to move forward with an assault-weapons resolution of some sort, and I support that.”

Reminded of that on Monday night, Weinberger said, “Well, Paul, you may have gone back and studied it more closely.”

Either way, he said, he’d since determined it made more sense to back less controversial gun-control measures, which might stand a better chance of passing muster with voters and state legislators. Both would have to sign off on the proposed charter changes.

So instead of an assault weapons ban, Weinberger said he now backed three of the four proposals the council would debate that night: banning guns in Burlington bars, mandating safe storage of firearms and enabling law enforcement officials to seize weapons after domestic-violence incidents. All three wound up passing by lopsided margins.

Weinberger opposed a fourth provision that would have required gun owners to obtain a new city permit to carry a concealed weapon. That measure failed by a vote of 4 to 10.

“We did what we’re supposed to do as legislators and representative officials,” Weinberger explained. “We looked carefully at the issues. We asked questions. We thought about it. We thought about what needs to happen for these ordinances to actually get implemented and become law and improve public safety. And we made an adjustment.”

According to Hoffer, Stein will conduct research and investigations with the “rigor” of a full-blown audit, but in a shorter time frame. He says the position, which has remained unfilled throughout his nearly 10-month tenure, will involve neither politics nor public relations.

A 2009 Kenyon College grad, Stein spent a year and a half at the Addison County Independent before heading to Montpelier last September to cover health care and energy for VTDigger.

“I was not actively seeking this position, but when the auditor approached me about the position, he was essentially offering me a stethoscope to examine state government,” Stein says.