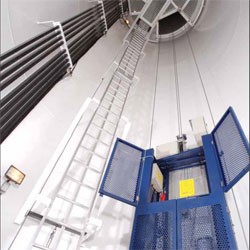 Green Mountain Power has become Vermont’s favorite whipping boy. Whether it’s for blasting on Lowell Mountain to make way for industrial wind development, or its proposed merger with Central Vermont Public Service, the state’s largest utility has garnered plenty of critics in the past few months. Sen. Vince Illuzzi (R-Essex/ Orleans), who chairs the Senate Natural Resources and Energy Committee, is calling for an independent counsel to investigate the merger.

Unifying detractors is the perception, deserved or not, that GMP is benefiting from a cozy relationship with Gov. Peter Shumlin. Now comes another piece of fodder for the conspiracy mill: The elevators being installed inside the nearly 300-foot wind turbines won’t be subject to state inspection. At least, that’s how GMP has interpreted the law.

Recently, a licensed elevator mechanic with more than 25 years of experience in the industry visited one of the turbines in the 40-megawatt Sheffield Wind project. He noted that inside the tower is a small, two-person lift that carries workers and their gear 260 feet up from the base of the tower to its nacelle, where the turbine’s “guts” are located. He likened it to “a birdcage on a wire.”

Since New England’s elevator industry is a small and relatively tight-knit community, the mechanic says he was curious to know who installed and inspected these 16 elevators, which are unlike any he had ever worked on. He also wanted to know who is installing, maintaining and inspecting the elevators that are going into the 21 turbines GMP is building on Lowell Mountain. He asked for anonymity in this story for fear using his name might compromise his job.

The elevator mechanic contacted Vermont’s Elevator Safety Review Board. The ESRB, which is appointed by the governor and overseen by the Division of Fire Safety — part of the Department of Public Safety — is charged with ensuring that all elevators in the state comply with the industry’s electrical, construction and life-safety codes.

The mechanic discovered that Vermont’s wind-turbine elevators do not have to be installed by licensed mechanics, nor are they subject to annual inspections. In fact, of the 2800 or so elevators in Vermont, those in wind turbines are the only passenger elevators, other than those in private residences, that don’t fall under the jurisdiction of the Division of Fire Safety.

Why not? Apparently, because GMP says they don’t. And thus far, no one at the Division of Fire Safety has challenged GMP’s claim.

On August 4, GMP attorney Mari McClure sent a letter to the ESRB explaining GMP’s position on the matter: “The wind turbines will not be open to the general public and the service lifts installed in the wind turbines will only be utilized by GMP employees and authorized representatives for installation and maintenance. Accordingly, GMP believes that the installation and permitting requirements ... have not been triggered.”

Nevertheless, a few days later, on August 9, the ESRB voted unanimously to require that all turbine elevators in the state be permitted and installed by licensed elevator mechanics only and inspected annually. However, the ESRB lacks the regulatory teeth to force the issue with GMP.

None of the ESRB members contacted for this story was willing to go on the record about the decision. ESRB chair Bob Patterson, who works for the Department of Public Safety, didn’t return calls seeking a comment. Cochair Bob McLeod, who works for the Vermont Department of Labor, deferred all queries to Bob Sponable, regional manager of the Division of Fire Safety’s Barre office.

As Sponable explains, the Division of Fire Safety has jurisdiction over a wide variety of structures in the state, both public and private. As he puts it, “It’s easier for me to tell you what we don’t cover: single-family, owner-occupied homes and farms. That’s it.”

Why no oversight of wind-turbine elevators? Sponable says his office has had “discussions at length” on this topic but ultimately agreed with GMP: In effect, because its wind turbines are owned and operated by a regulated utility, he says, any oversight of their operations falls to the Department of Public Service and the Public Service Board, the latter of which issued GMP its Certificate of Public Good on the Lowell project.

Sarah Hofmann is deputy commissioner of the Department of Public Service. As she points out, DPS has authority to examine power plants, equipment, transmission lines, substations and various other properties belonging to utilities. But as for elevators, she admits, “I’m afraid I’m a little out of my element... We definitely do not ‘do’ elevators.”

What about Vermont’s workers’ compensator system, which protects and compensates employees injured on the job? Director Steve Monahan says that his office has the authority to inspect virtually any workplace or job site in the state, except for those in federal buildings and military installations.

“If an employer was not doing regular inspections and maintenance, yes, that would be of concern to me,” Monahan says. However, he adds, unless his agency receives an employee complaint about a wind-turbine elevator, or there’s a fatality in one, VOSHA has no reason to go in and inspect them.

Such explanations “defy logic,” says Gregg Rogers, national coordinator of the Elevator Industry Work Preservation Fund, a partnership between the nation’s elevator manufacturers and its technicians. Rogers, who’s based in Adel, Iowa, knows something about wind-turbine elevators. Iowa is now the second-largest wind producer in the United States and has scores of turbines dotting its landscape.

Rogers acknowledges that the Department of Public Service and its PSB may regulate utilities, “But an elevator is still an elevator, and it doesn’t matter if it’s in a nuclear power plant or a wind-turbine tower.”

That wind towers aren’t “public” hardly seems grounds for such an exemption, he notes. Many other ESRB-inspected elevators in Vermont are also closed to the public, including those at Vermont Yankee, the McNeil Generating Station and the hydroelectric dams on the Connecticut River. Electrical inspectors from the Division of Fire Safety routinely inspect the electrical connections on solar arrays, too. Prisons, jails and construction sites all comply with the same elevator-safety rules.

But the elevators in wind turbines are unlike any others found in Vermont, explains GMP spokesperson Dorothy Schnure, and thus need to be installed and maintained by out-of-state experts.

“These are very different from what you’d find in a shopping mall or an office building,” she explains. “It’s a specialty lift equipment specifically designed for wind turbines ... just like any other specialty equipment we have around our generators.”

Rogers acknowledges that wind- turbine elevators are unique. Like the towers they’re built in, they occasionally sway in high winds. However, there’s nothing inherently unsafe about turbine elevators. As he explains, manufacturers began adding them to wind towers after they found that technicians climbing hundreds of feet up and down ladders day after day were getting burned out within 24 months. With the added cost of training new technicians, he says, “the lift became a viable option.”

About 27 people are killed in elevator mishaps each year, according to the U.S. Bureau of Labor Statistics. However, because this particular aspect of wind power is still in its infancy, Rogers says his organization has yet to compile any accident statistics related to wind turbine elevators. Nevertheless, he says most states require that all elevators be inspected annually and maintained by either licensed or “qualified” elevator mechanics.

“It has recently come to light that elevators will be installed in the wind-turbines on Lowell Mountain,” Wood said. “With the assistance of the Department of Public Service and the Vermont Attorney General’s Office, the Department of Public Safety is reviewing if wind turbines are considered public buildings and, subsequently, if the elevators are subject to inspection under the jurisdiction of the Division of Fire Safety.”

That latest word is welcome news to the Vermont elevator mechanic, who emphasizes that he’s neither looking for additional work nor opposed to industrial wind power.

“Yeah, I’m in favor of wind power, 100 percent. But I’m also for elevator safety,” he says. “Nobody can survive a 260-foot fall from inside these towers. And if I were an employee there, I’d feel much better knowing that somebody was making sure they’re installed and maintained properly.”