Why Are There New Sensors on Burlington Parking Meters? 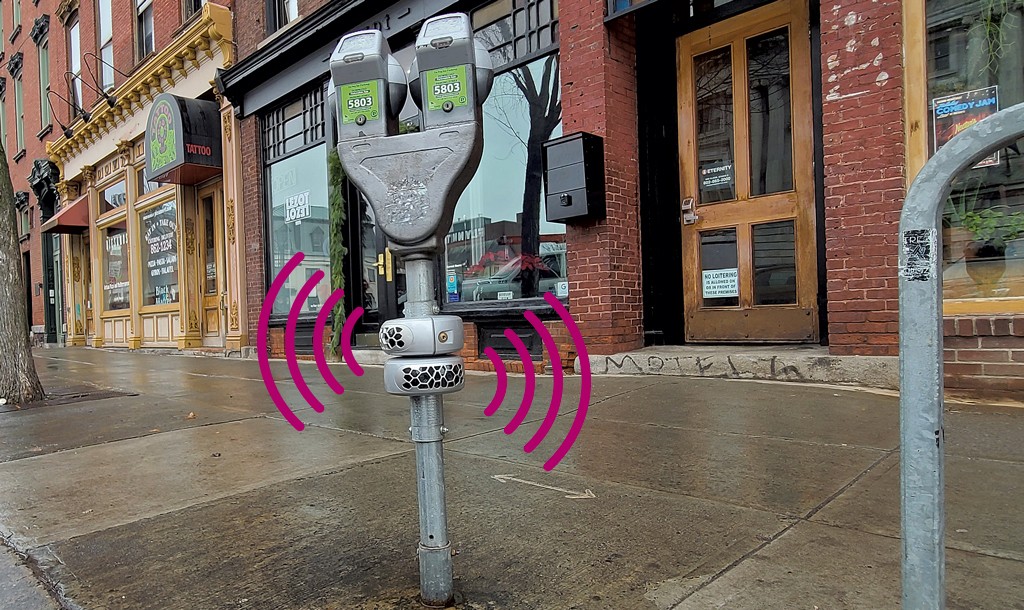 Anyone who's visited downtown Burlington on a busy afternoon or evening knows the frustration of trying to find a convenient parking space. Many employ the George Costanza method: First, look for the dream spot right in front of the destination, then loop around in concentric circles. That can work, but it often yields diminishing returns, and folks who've been burned one too many times may not even venture into the Queen City.

"This has been a consistent refrain — that there's no parking in Burlington," said Jeff Padgett, the city's director of parking and traffic. It's a myth, he said, that his office is desperately trying to bust.

The city is working to ease parking concerns through a pilot program that may one day allow Queen City motorists to see exactly where parking is available. A handful of stereoscopic, pole-mounted sensors are attached to a small number of Main Street meters. Once operational, this month or in January, they will detect when a vehicle is occupying the space.

The goal is to allow people with smartphones to use an app that shows every available space, based on data gathered by the sensors.

For the time being, the city will use them to collect occupancy data for determining parking trends. The sensors aren't cameras, as one Seven Days reader feared.

"There's nothing captured other than the presence of the vehicle," said Mark Berling, a salesperson with IPS Group. The San Diego-based company makes the sensors, as well as the smart meters introduced in Burlington in the mid-2010s.

The primary goal of Burlington's pilot program is to learn how many people are parking on the street, at what time of day and for how long. Meters can also give this information, but they aren't as accurate. A motorist could pay for two hours and leave the space after one.

But the sensors have other functions, too. They can increase revenue one car at a time by resetting meters once cars have vacated spaces. That prevents piggybacking — a car pulling into a space for which the meter has remaining time. In that scenario, instead of collecting overlapping payments from both cars for the same block of time, the city only gets a payment from the first car that's parked.

But Padgett said Burlington won't use that feature.

"A lot of cities justify the use of these occupancy meters because they calculate the increased revenue [from stopping] piggybacking to pay for the meters themselves," he said.

The city hasn't spent any money on the sensors yet; it is testing 18 for free. Sensors sell for $250 each. Retrieving data from 18 of them would cost the city $65 per month. If the test proves effective, "expansion would certainly be considered," Padgett said.

Improving the environment is another important benefit. Motorists who know precisely where available spaces are will waste less gas and create fewer emissions than they would endlessly circling downtown.

The city intended to have the sensors functioning during August, September and October, Padgett explained. Between peak summertime tourism, the return of college students (and, briefly, their parents), and fall foliage season, the three-month period is one of the busiest times of the year.

Padgett said minor technical difficulties caused the pilot's delay and that the revised timeline was both good and bad. It would have been great to collect data when the downtown was most congested, he noted. But testing in the winter will allow officials to see whether snow accumulation affects the sensors' performance.

IPS Group case studies show that the company's technology has proven effective in cities such as Malden, Mass., a suburb of Boston with roughly one and a half times the population of Burlington. Once Malden had collected enough data about parking trends, it implemented a fully integrated smart-parking system. Neil Sullivan, owner of Malden restaurant Cornucopia Foods, says in the study that his business experienced a 10 to 12 percent increase in weekly revenue once the city implemented its new system.

Padgett noted anecdotally that metered spaces are almost always available in Burlington and that the College Street and Lakeview garages — connected structures that have entrances on College, Battery and Cherry streets — are consistently 50 to 70 percent full. He said that Burlington has no plans to increase the number of parking spaces or facilities.

Padgett said he sees "more solutions to parking right now than there are problems." Between multiple ways to pay — coins, credit cards and the ParkMobile app — and plenty of available parking, the issue might be all in people's heads, he said.

Learn about where to park and ways to pay in Burlington at burlingtonvt.gov.