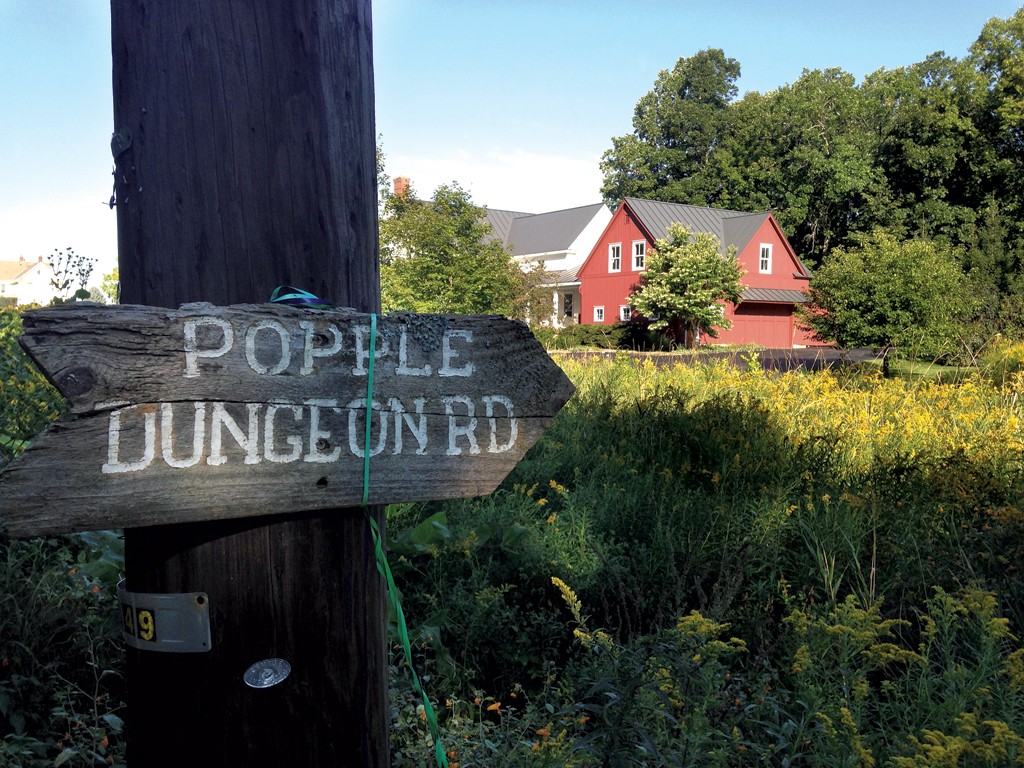 Readers of a certain age may recall the Popples, a vaguely Care Bears-like line of toys whose characters appeared in a poorly animated Saturday morning TV show. These brightly colored, frolicsome critters were distinguished by the fact that all their names began with P, and by their ability to pull nearly any conceivable object from their body pouches. They could also fold themselves into those pouches to become fuzzy little bouncy orbs. Oh, what fun those whimsical Popples had gamboling about!

If the Popple Dungeon roads in Chester and Charlotte are not the current or former sites of prisons for criminally inclined, cut-rate 1980s cartoon characters, then WTF are they?

This is actually a series of interconnected questions: No. 1: What kinds of popples are we talking about here? No. 2: What do dungeons have to do with anything? No. 3: Why do two Vermont towns nearly 100 miles apart have streets with this unusual name?

We easily answered the first question by turning to one of the greatest reference books ever published: Dictionary of American Regional English. This remarkable work, compiled over nearly 30 years, is the definitive source on regionally specific words and phrasings. Its entry on "popple" explains that the term has a long history in the Northeast and Midwest as a kind of arboreal catchall. Though etymologically related to "poplar," the word is also commonly used in casual reference to alders, quaking aspens, cottonwoods and other trees.

The "dungeon" in these two roads' names seems to refer not to a dank oubliette but, by association, to a dark, creepy space, a reading supported by Chester author Virginia Blake Clark in her 2000 book The Source: Popple Dungeon, Vermont: The Settlement, Farms and Genealogy of a Small Community in Vermont. Near the beginning of her work, Clark places a section called "That Odd Name," in which she writes,

Locals referred to a stretch of road that reached from [the District] 15 school to a bridge in the east as "the dungeon." The overhang of the tree branches and the heavy growth of bush along that stretch of road gave the area a dark and forbidding appearance.

As you can imagine, [local] boys picked up this name and started to call their neighborhood Popple Dungeon or just "The Dungeon." This would have happened sometime prior to World War I, but the date is not clear.

Clark explains that the term "Popple Dungeon," which is most strongly associated with the town of Chester, also refers to parts of the neighboring communities of Andover and Windham. The three large farms that constituted the original Popple Dungeon area were first purchased and settled in the mid-18th century.

It's no surprise that Chester maintains this remnant of its history. But Chester is in southeastern Vermont, on the other side of the state from Charlotte, which boasts a good chunk of Lake Champlain coastline a few miles south of Burlington. How did this peculiar name migrate 100 miles northwest?*

If anyone knows the answer to this question, it's retired trial lawyer Ed Amidon, who, 35 years ago, built the second house on Charlotte's Popple Dungeon Road. He's a keen amateur historian, so he does know how his street assumed its unusual, descriptively inaccurate name.

Turns out that the first residents of Charlotte's Popple Dungeon Road had a mischievous son who, Amidon says, "stole the [road] sign from Chester and put it up on the corner of a public right of way — which was really just the driveway to their house." The handmade sign would periodically deteriorate but was always replaced. So far as Amidon knew, he lived on an unnamed, private rural lane running perpendicular to Whalley Road.

Soon, though, a name that started as a joke found itself inscribed in state ledgers. Nestled in subsection 7056(a) of the 1993 statute that created Vermont's enhanced 911 emergency response system is a stipulation that any municipality that wishes to participate in the system must "identify all building locations and other private and public locations." In other words, every road needed a name so ambulance and fire-truck drivers would know where to go.

To make Charlotte fully compliant with the statute, the town's selectboard assigned to a certain rural road the name that had long been unofficially used to refer to it. Amidon believes that selectboard member Frank Thornton formally put Popple Dungeon Road into the books.

Though he's made his peace with it, Amidon isn't overly fond of his street's name. "It requires constant explanation," he says. Placing a phone order for a delivery is particularly grueling, Amidon notes. "You spell it out, and there's dead silence on the end of the line."

So it appears that our semi-obscure 1980s stuffed animals can rest easy. No one is going to throw them into a candy-colored cartoon jail in Vermont.

*Correction 09/16/14: An earlier version of this article stated that Chester was in the southwestern portion of the state. It is actually in the southeast.