Why Are Fraternities and Sororities Exempt from Federal Taxes? 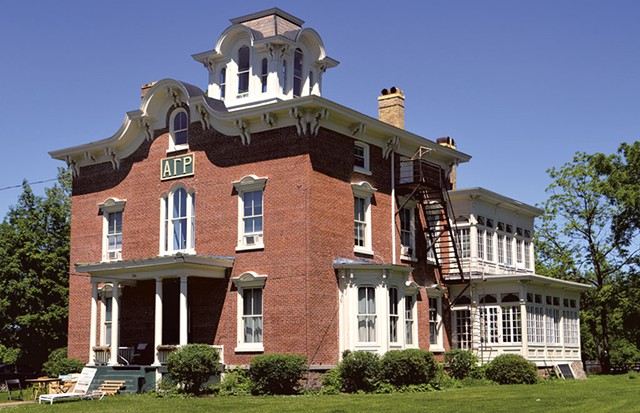 It's not just animal shelters, churches and food shelves. The host of that kegger you crashed in college might have been a nonprofit.

About 20 fraternities and sororities are registered as tax-exempt organizations in Vermont, recognized by the Internal Revenue Service as social clubs for "pleasure and recreation."

But it's a selective bunch. Only Greek organizations that own property are formal nonprofits; the designation provides the structure to manage the property and allows the groups to skip paying federal income tax on rent or interest, said Mitch Pearl, a partner at Langrock, Sperry & Wool law firm.

At the University of Vermont, 10 fraternities and sororities own homes and are registered as nonprofits — about half the total number of Greek organizations at the university, said Pat Brown, director of student life.

The remaining fraternities are student groups under the umbrella of a national fraternal organization but have no official standing with the state or feds, Brown said. Three UVM frats are currently suspended for bad behavior — two for several years; one in perpetuity.

Tax exemption might not seem compatible with the party-house stereotype, conceded Josh Lagerquist, a rising senior and president of Alpha Gamma Rho at UVM.

But AGR, which considers itself an agricultural fraternity, is different. Lagerquist joined as a first-year student because his frat brothers "weren't the elitist-stereotype men, and they weren't the idiot Animal House guys," he said, referring to the 1978 comedy featuring fraternal misdeeds.

Last year, he said, the group volunteered more than 500 hours for the UVM Children's Hospital, Cochran's Ski Area and Camp Kesem, an organization that helps kids whose parents have cancer.

The frat, which owns a stately brick building with a cupola on South Prospect Street in Burlington, actually operates under two nonprofits. Students run a 501c7, the federal designation for social clubs. They collected $153,000 in membership dues and spent $139,000 on meals and programs, according to the group's 2016 IRS filing.

A second organization, a 501c3 run by alumni, manages the house, which is valued at $1.16 million. It serves as the fraternity's de facto landlord.

Having separate entities protects AGR's wealthy alumni brothers from liability in the case of an accident — or a bacchanal, said Pearl. "If the fraternity gets sued, they're not on the hook," he explained.

In 2016 the group, called the Alpha Gamma Rho Alumni Association, spent most of the $65,000 it earned from rent and donations on taxes and fixes to the house, according to the group's treasurer and AGR alum Chris Lapierre, who noted "it's giant and old and costs a lot to maintain."

That same year, they got involved in a discussion that played out in the state legislature about whether the public good created by fraternities and sororities outweighed what they didn't pay in taxes. The property tax exemption for Greek organizations was set to expire unless lawmakers voted to preserve it.

Members and alumni made their pitch in Montpelier, donning suits and ties to expound on their philanthropic efforts in the community. In the end, the frats failed to make the case: Lawmakers didn't take action, allowing the exemption to sunset.

For AGR, the impact was substantial, according to Lagerquist.

Previously, the frat was partially exempt from property taxes and paid about $11,000 annually. Now, it pays nearly $31,000 a year in taxes, which go to the city and the state education fund. The jump "is pretty extensive," Lagerquist said. "It hurts."

All told, the houses pay $216,000 in taxes, according to City Assessor John Vickery. That includes the suspended frats, which are still getting billed.

The original print version of this article was headlined "Tax-Deductible Pledges: Frats Are Nonprofits, Too"