WTF: Why Are Barns Allowed to Fall Into Disrepair Yet Are Rarely Torn Down? | WTF | Seven Days | Vermont's Independent Voice

WTF: Why Are Barns Allowed to Fall Into Disrepair Yet Are Rarely Torn Down? 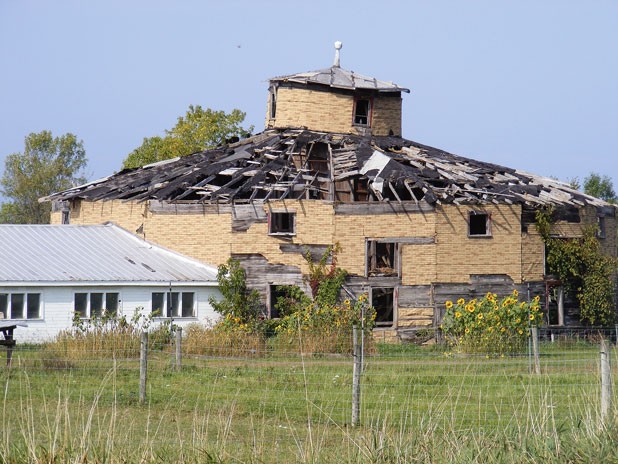 In this profoundly secular state, one of the few objects to achieve sacred-cow status is the barn. Whether they’re round or rectangular, farmhouse red or weather-beaten gray, barns have long been potent symbols of Vermont’s rich agricultural heritage. They show up on countless postcards, calendars, magazine covers and other tourist memorabilia.

While a smattering of historic barns around the state are lovingly preserved — think the West Monitor Barn in Richmond and the Coach and Farm barns at Shelburne Farms — many older barns are looking long in the tooth. More than a few barely still qualify as freestanding structures.

However, unlike houses, churches and commercial buildings, which might be renovated multiple times, a barn is commonly left to the inevitable process of entropy — until a fire, snowstorm or stiff gust of wind reduces it to ashes or a pile of lumber.

Considering our cultural fixation on barns, it’s strange that no state law prevents them from being torn down or mandates their upkeep should the owner let them stand indefinitely. Unless a barn stands precariously close to a road and poses an imminent safety hazard, these agrarian temples are free to stand or fall on their own terms. WTF?

One obvious reason for the laissez-faire attitude is practicality: so many barns, so few resources to maintain them.

Until last week, Josh Phillips was director of the Vermont Barn Census, a federally funded project run through the National Park Service’s Preserve America grant program. Created in 2008, the Vermont Barn Census has been drawing on the help of historic preservationists and volunteers to compile data on barns and other agricultural structures throughout the state.

Phillips, a native Vermonter, could be considered the state’s resident expert on barns, and he admits to a “particular enthusiasm” for round and polygonal models.

“My family has a farm in Benson, and I spent all kinds of time there when I was a kid,” he says. “Those barns are the site of some of my richest childhood memories.”

Since 2011, Phillips has visited about 1300 Vermont barns, though he admits he checked out most via “windshield survey” rather than actually getting inside to inspect their posts and beams or climbing up to their haymows.

What do we know about Vermont’s barns? To date, Phillips’ program has surveyed about 3700 agricultural structures in Vermont. That’s just a fraction of the state’s estimated 12,000 to 15,000 farm structures, of which about 80 percent are barns. The rest, according to Phillips, fall into one of 50 categories of agricultural outbuildings that also include granaries, carriage houses, milking parlors and the like.

Generally, a barn must be at least 50 years old to qualify for the National Register of Historic Places. Barns that old become eligible to receive grants of up to $15,000 for preservation. But, as Phillips points out, it’s a competitive process, and funds aren’t doled out lightly.

Among the factors considered: Is the barn located on a working farm? How’s its structural integrity? Would a renovation project affect the long-term viability of the farm itself? Is the barn a unique or outstanding example of a certain style of architecture or construction?

According to Phillips, the oldest barn in Vermont on which he can put a definitive date was built in Cornwall in 1787.

“But,” he cautions, “I am positive there are some [older ones] in southern Vermont that I just don’t know about for sure yet.” For example, a barn in Manchester has been tentatively dated to 1760.

What’s the biggest killer of barns? While people tend to notice the dramatic demises, such as razing by a large fire or heavy snow load, Phillips says it’s far more common for barns to die from slow, steady decay. Water gets in, the roof and foundation fail, and ultimately the entire structure collapses.

But why are they allowed to decay?

“As much as anything else, lack of purpose, as with people, is probably [barns’] greatest enemy,” Phillips says. “If it’s not being used for anything, it becomes pretty difficult for most barn owners to justify the cost associated with [the barn’s] maintenance.”

Or demolition. Because decrepit barns rarely have any residual economic value but also aren’t in anyone’s way, Phillips says, “they tend to just sit there and deteriorate.”

As a consequence, Vermont loses quite a few barns each year. Although Phillips can’t put a definite number on it, he estimates that more than 100 barns disappear annually.

For people who want to see some cool ones before they’re gone, Phillips suggests driving through Tunbridge, Stratford, East Montpelier and Morrisville. The last, he notes, probably has more barns than any other town in Vermont.