Whose Records? Public Information Law Can Be a Maze 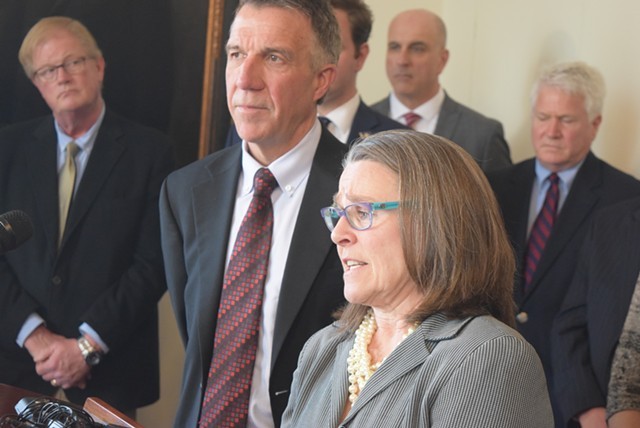 The process of obtaining public records in Vermont is a maze of inconsistent standards and incomprehensible rulings. That's the view of many journalists and advocates who seek such documents.

"In our experience, it seems like some [officials] do not take their responsibility under the law seriously at all," says Jay Diaz, attorney for the American Civil Liberties Union of Vermont.

State law requires government officials to make their records available to the public. But over the years, the legislature and the courts have carved out dozens — if not hundreds — of exemptions. Because government entities often interpret and implement the law differently, those requesting records face inconsistent wait times and price tags.

Hilary Niles, a Montpelier-based independent journalist, relies on the Public Records Act to bring important stories to light, but her experience with it has been mixed.

"Some people are prompt and responsive and helpful," she says. "So when I am met with delays, withheld records, withheld information about those records, when I am charged hundreds of dollars, or when I am told that a steward of public records is 'strictly interpreting the public records statutes,' I find that problematic."

Not everyone thinks there's a problem. According to Gov. Phil Scott's administration, the system is working just fine.

"We're just working to follow and comply with the law, and we think we're doing that," says Scott spokeswoman Rebecca Kelley. "We're not sure what more we can do."

Scott's chief counsel, Jaye Pershing Johnson, advises applicants to trust the process: "An agency responds. You don't like the response, you can appeal [within the agency]. If the appeal is not satisfactory you can go to Superior Court."

This isn't a problem that began with the Scott administration. For years, applicants have found the process frustrating, if not befuddling. Think Catch-22 with a hint of Kafka.

"We can only speak to how our decisions are made," Kelley says of the EB-5 records release, adding that Scott "has been clear that that is a clear case of extreme public interest."

Sensible. But it fails to address the wide latitude enjoyed by officials, including political appointees, and the appearance of self-interest that's created when the fox is in charge of disclosing what's happening in the henhouse.

"The system clearly is not working like a well-oiled machine," he says, recalling his time in government. "We had meetings with the general counsel for the governor, and everybody was saying, 'We need more resources for this. We need more guidance. We need a uniform way.'"

Johnson says otherwise. "The statute is the guidance," she asserts. "The legislature has given us guidance, and we follow that guidance."

"We're monitoring the case," Johnson says. "We're looking to the court for guidance."

In the meantime, will the administration tell its officials not to use personal email for public business?

"We're not looking to set policy for all government officials," Kelley says.

How best to fix the situation, or at least diminish the gray areas? Some, including VTDigger.org founder Anne Galloway, advocate an overhaul of the law itself. Short of that, as Groveman points out, additional guidance from the top would help.

For Niles, the biggest problem is the appeals process, which she says "provides very limited recourse." After a designated official denies a records request, the requester can make a single appeal to the chief of that agency or department. The only other recourse after that is to sue, which can be expensive and time-consuming.

One way to rationalize the process and remove the taint of politics would be to create an independent public records ombudsman to handle requests or oversee the process.

"You do need, like, an office of records that includes records responses and access to documents and guidance," says Groveman.

"This ombudsman or whatever you're thinking about, you know, again, just referring everything back to the judiciary, because that's where the legislature in its wisdom has directed people who feel aggrieved," says Johnson. "To have an ombudsman making policy calls on those kinds of things ... you may find yourself looking in a hundred mirrors."

What she seems to be saying is that an ombudsman would be an unworkable intrusion. But according to the Reporters Committee for Freedom of the Press, a total of 19 states have ombudsmen "or whatever you're thinking about" who handle public records requests and/or provide a nonjudicial avenue for appeal. Those states make it work. Why not Vermont?

Well, in these tight budget times, the immediate response would doubtless be, "We can't afford it."

But can we afford not to?

"My understanding from other states is that a little investment in an ombudsman program goes a long way in consistent and reliable administration," says Niles, "and in some cases can cut down on legal fees for fighting about public records in court."

While the Scott administration is not amenable to reform, it is promising to be open and accommodating — within the framework of the law.

"The proof will be in the pudding," says Kelley, "in our willingness and sincerity in being transparent."

Scott may be pure of heart and transparent as a pane of glass. But depending on the good intentions of politicians, as the current system does, is a recipe for disappointment.

And, remember, we're talking about public records. Yours and mine. Not the government's.

EB-5 On the Clock

This is a busy week for the U.S. Congress. Members have just returned from a two-week recess. If they don't pass an omnibus spending bill — or at least another stopgap measure — by Friday, the government will shut down. And President Donald Trump's administration is pushing for action on health care and tax reform, as well.

In the midst of all that, the EB-5 investor visa program also faces a Friday deadline. And one of its most ardent supporters, Sen. Patrick Leahy (D-Vt.), says that without some serious reforms, the program should be allowed to expire.

For those just joining us, EB-5 allows foreign nationals to apply for permanent residency in the U.S. if they make a significant investment in an approved development project. It's helped fund some notable deals in Vermont — and also spawned perhaps the biggest case of alleged fraud in state history: the Northeast Kingdom Economic Development Initiative, centered around Jay Peak Resort.

Congress must periodically reauthorize the program. Twice in the past year, it has simply kicked the can down the road, re-upping it on a temporary basis. Last September, Leahy went so far as to vote against a spending bill because it failed to include EB-5 reforms.

Leahy has worked with Sen. Chuck Grassley (R-Iowa) to develop a reform package and shepherd it through a minefield of lobbyists and special interests.

This month, they unveiled a revised version of their package. It includes higher minimum investments, new protections for investors, and a provision that allows investors to keep their places in line for a green card if they have to file new petitions or amend existing ones.

That final addition is designed to help investors who are caught up in questionable investments. Under the current system, if an EB-5 development fails, as in the case of some Jay Peak projects, investors can not only lose their capital but also their chance at a visa.

The most contentious dividing line on EB-5 reform has always been between rural and urban interests. Leahy and Grassley want to retain preferences for rural developments, arguing that the intent of EB-5 is to funnel investment funds into areas that have trouble attracting capital. Their colleagues from more populous states argue for "equal treatment."

One person closely watching the issue is Vermont Secretary of Commerce Michael Schirling.

"EB-5 has been a good mechanism for financing projects in Vermont, not without its requisite controversy," he says, referring to the Jay Peak mess. "We want the program to continue."

Schirling would welcome additional investor protections and "portability": allowing investors to get out of bad deals without jeopardizing their immigration status.

And, naturally, he's concerned about the urban/rural balance. "Competing against more urban areas for projects certainly does present challenges," he says. "Investors may have a better knowledge of our urban areas and may generally have a tendency to migrate toward those projects."

The most likely outcome in Congress is yet another short-term spending bill, though Leahy spokesman David Carle says there's a "different landscape" this time around.

"One difference this time is that there is now rulemaking under way in the Department of Homeland Security on EB-5 reforms," he explains. The weight of DHS should help sway undecided lawmakers.

Although Leahy voted against last September's spending bill because it failed to reform the EB-5 program, he is making no such commitment this time around.

"He's in the midst of all these negotiations and has not been making predictions," says Carle.

Top of the Heap

Habitués of Vermont's political scene may recall Ben Sarle, former communications director for the Vermont Democratic Party. He left the state in the summer of 2015 for the bright lights of New York City.

That's "a" deputy press secretary — one of many, because New York's government is a big, sprawling endeavor. "City Hall is like a mini White House," Sarle says. "There are so many agencies to represent and so many press inquiries to field."

Sarle credits his tenure at the VDP with preparing him for the new gig. "I would not be able to work in New York City government if it wasn't for that," he says.

Coincidentally, de Blasio is coming to Vermont next month. He will be the special guest at the VDP's David W. Curtis Leadership Awards Dinner on May 5.

Unfortunately, as the low man on the press office's totem pole, Sarle won't get to accompany the mayor. He'll be left behind in city hall, answering the phones and writing press releases.