Who's Behind the Artwork on South Burlington's Utility Boxes? 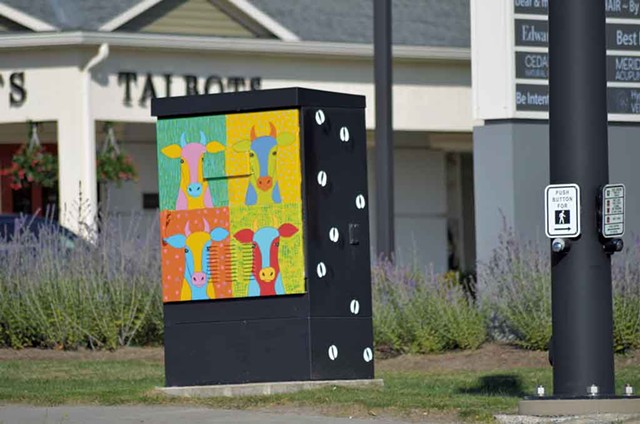 Some aspects of the built environment are so drab and uninteresting that after a while we stop noticing them. Utility boxes, those refrigerator-size metal cabinets found on the corner of virtually every intersection with a traffic signal, fall into this category of invisible infrastructure — that is, until their paint starts to peel and they get covered with stickers, flyers and graffiti. Then they become community eyesores.

But in the last month or so, utility boxes along Route 7 and elsewhere in South Burlington have begun catching motorists' eyes for a different reason. Seemingly overnight, they've become canvases for bright and colorful paintings: of purple cephalopods at Swift Street, a bouquet of flowers at Allen Hill Road, a snowboarding rooster at Laurel Hill Drive, and an Andy Warhol-esque foursome of cows at IDX Drive. Who are the roadside Rembrandts responsible for this beautification campaign?

Actually, artwork on utility boxes in Chittenden County is nothing new. About a decade ago, Bruce Wilson, a Burlington-based youth activist who helps set up restorative justice programs and teen drop-in centers around the state, launched a graffiti-abatement program called Arts So Wonderful. Working with youth who had been referred to his program by the courts and the Burlington Community Justice Center, Wilson offered community service opportunities to youthful offenders, many of whom had been caught tagging property with graffiti. He then "commissioned" them to paint murals and utility boxes throughout the Queen City — for free, of course.

The benefits, Wilson explained, were many: The youth made restitution by beautifying their neighborhoods while also learning how to apply their artistic skills in more community-minded ways. Wilson, a native of Chicago's South Side who's worked for years with at-risk kids, also found that if you paint murals over graffiti, vandals tend to leave them alone. Why? It's like there's an "honor code" to respect someone else's work, he explained. Nobody tags his murals or painted utility boxes until they get old and dirty. 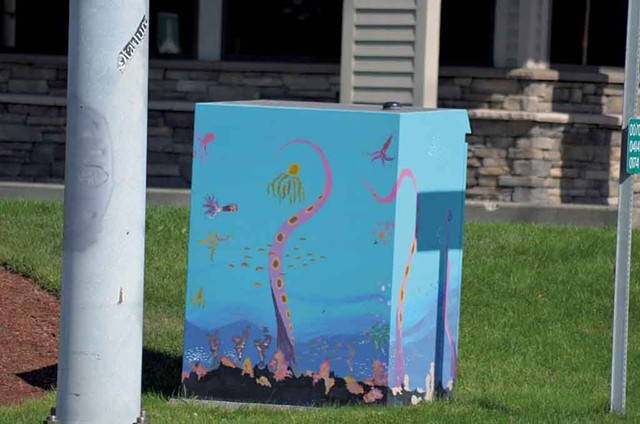 The South Burlington boxes are an unrelated project. Those creations were inspired and organized by Katie O'Brien Barritt, a former art teacher from South Burlington. After 30 years of teaching at the Hinesburg Community School, she explained, "I knew that anything I did after retirement would include art."

About two years ago, O'Brien Barritt and her daughter noticed a utility box on Kennedy Drive that was covered with graffiti. So she approached Tom Hubbard, South Burlington's deputy city manager and treasurer, and asked for permission to repaint that box, along with two other shabby-looking ones in high-traffic areas. She then solicited the help of other community members. The first one was an owl her daughter painted on Kennedy Drive.

"It took basically no time at all to get the community excited about doing this," O'Brien Barritt said. "People were pulling off the road all excited to see this."

"It has been incredibly well received," said Justin Rabidoux, public works director and city engineer. "Probably every two to three weeks I have random people emailing me wanting to get in on the effort and asking how they can contribute."

But O'Brien Barritt didn't stop there. After demonstrating the value of their efforts, her group got permission from the telecom utility Consolidated Communications to repaint one of its utility boxes. Then the Vermont Agency of Transportation OK'd the decoration of some of its boxes, including the ones done along Shelburne Road in the last month. 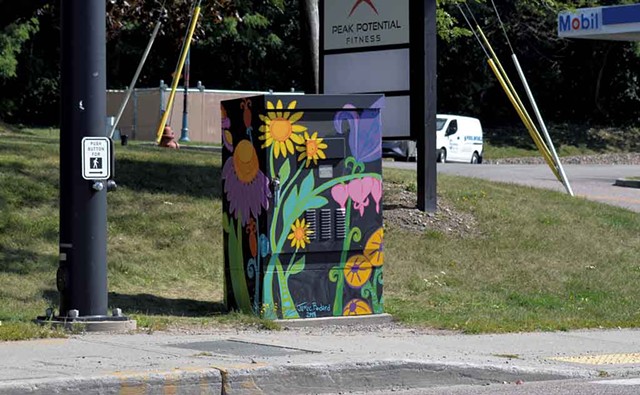 "Once they gave us permission, I was so afraid they might rescind it," she said about VTrans, "so I got my artist group to jump right on them."

To date, the group has painted 50 utility boxes as well as two underpasses. Currently, 12 more boxes are in the works, with another 20 coming in the future. The group also painted a mural under Interstate 89 on Dorset Street where kids walk home from school.

"It was kind of an icky, scary area," she explained, "so we painted something bright and colorful there."

Thus far, nearly all the funding and supplies have come from private donations. O'Brien Barritt started a GoFundMe page but had to close it out when she needed to buy more paint.

"The more boxes get painted, the more the enthusiasm grows," she added. "Then I get this rush of people who want to keep painting."

Neither the city nor the state have put restrictions on what the artwork looks like, other than prohibiting political, commercial or "edgy" imagery. As Rabidoux put it, the city doesn't want to "censor or bless" the art by requiring designs to be reviewed in advance. And the only "contribution" from his department, other than its permission, was the provision of construction signs and safety vests for the artists to use while they work.

"We're fortunate to have someone of that community mind-set," he added, "who is willing to give of her own time to make our community a better place."

The original print version of this article was headlined "Who's Behind the Artwork on South Burlington's Utility Boxes?"