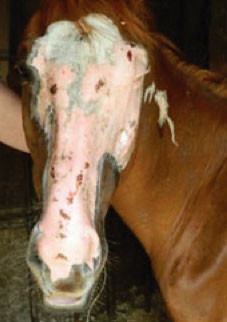 Investigators have finally nailed down the culprit responsible for the severe burns and blisters found last month on the face of an Essex horse, which left it blind in one eye: bad clover.

“We are almost 100 percent certain that this is not the result of any criminal act or animal cruelty,” reports Cpl. Ed Piro of the Essex Police Department, who investigated the case. According to Piro, a veterinarian at the Vermont Large Animal Clinic — Equine Hospital in Milton determined that the horse had eaten a type of clover called alsike that causes liver toxicity and left white portions of its skin photosensitive. That photosensitivity causes burns that appear similar to those caused by an acid or other corrosive. The vet treating the horse was not authorized to comment on the case as of press time.

On May 16, the owners of “Nellie,” a 13-year-old paint mare, went to their barn and discovered the horse’s face covered in a gel-like substance. At first glance, they assumed that it was some type of corrosive that had caused peeling to the horse’s skin and permanently damaged its left eye. A vet later determined that the eye would need to be surgically removed.

The Humane Society of Chittenden County contacted Spring Hill Horse Rescue, a large-animal rescue organization based in Clarendon, to help with Nellie’s specialized care. Local horse owners also feared the possibility that this was a case of deliberate and premeditated cruelty.

According to Spring Hill’s Deb Loring, Nellie’s owners can’t afford to cover her ongoing veterinary bills, which will eventually include the cost of surgery to remove the bad eye.

Despite the severity of the injury, Loring reports that Nellie is making a good recovery and has regained some of the weight she initially lost due to the stress and trauma of the incident. She’ll need to put on more weight, however, before she’s strong enough to undergo surgery.

For its part, Spring Hill Horse Rescue has made its own impressive recovery following the considerable losses it sustained during last year’s Tropical Storm Irene. The nonprofit shelter had to be evacuated last August and sustained considerable flood damage. It lost all of its pasture, shelters and hay.

Since then, Spring Hill has bounced back and is now sheltering 13 horses, two pigs, two turkeys and a zebu, a small breed of cow from Asia. In the last 12 years, the shelter has found new homes for more than 1000 horses.

Donations to help with Nellie’s care can be sent to Spring Hill Horse Rescue, 175 Middle Road, Clarendon, VT 05759. Donations can also be made online, springhillrescue.com.