Who Is Watching Vermont's Legal Guardians? 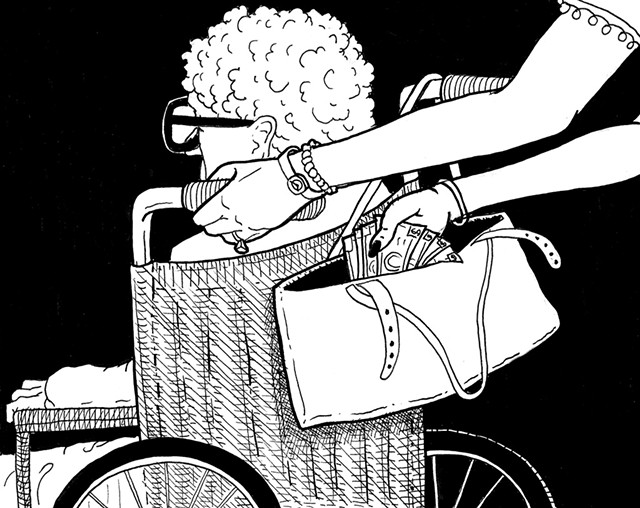 Bruce Thomas and two of his siblings waged a costly court battle for eight years, alleging that their brother Paul abused his legal power as their elderly mother's court-appointed guardian and bled her holdings of $1.1 million.

Paul paid himself for work that wasn't necessary or wasn't done, his siblings alleged in court filings. They said his self-dealing was an obvious conflict of interest. On March 21, Orange County Probate Judge Bernard Lewis effectively removed Paul from control of Miriam Thomas' finances, though he will continue to act on his mother's behalf on medical and nonfinancial issues.

Lewis' order says he will replace Paul with a "neutral third party" who will serve as financial guardian. The order doesn't accuse Paul of theft, but the judge made it clear that the "sloppy or incomplete" financial records Paul filed for Miriam's estate made it impossible to figure out what he was doing with her money.

Although Bruce and his two siblings ultimately got what they were asking for, Bruce said their long fight illustrates Vermont's weak oversight of guardians. He is seeking action by the state legislature to toughen relevant laws.

Attempts to contact Paul for this story were unsuccessful. His attorney, Frank Olmstead, declined an interview but suggested in an email to Seven Days that there was more to the story.

"Neither the guardian nor I will address the likely incorrect, exaggerated and misleading statements about our conduct involving Jane Doe that have been made by some of her adult children," he wrote, making a point of not using Miriam's name. He also wrote, "The Probate Court has not concluded that there has been any abuse or exploitation of Jane Doe despite years of urging by several of her adult children."

The seeds of the Thomas family dispute were sown more than 10 years ago. As Miriam's husband's health declined before his death in 2007, her mental facilities also began to falter, and she granted Paul power of attorney — legal authority that allows a person to manage finances on someone's behalf. Power of attorney can be granted without a judge's approval.

In 2009, Miriam, who had developed dementia and could no longer tend to her own affairs, moved to the Valley Terrace nursing home in Wilder. Since then, court records say, Paul has paid himself tens of thousands of dollars for fulfilling his duties as guardian. Still, he kept shoddy records and filed them after legal deadlines, Judge Lewis ruled.

When Bruce and his siblings began to suspect in 2010 that Paul was mismanaging their mother's estate, they went to Orange County Probate Court to ask Lewis to install Bruce, who lives in Trumbull, Conn., as their mother's guardian. A guardianship carries authority similar to a power of attorney, often has broader authority and is assigned by a judge.

Instead, the judge appointed Paul, who still lived in the family's Newbury home. From then until his March decision, Lewis presided over a long and contentious dispute that he characterized in a ruling as a "family feud," noting that yet another sibling sided with Paul.

"I get a phone call from this client, and he's a wreck — just yelling at me that all of his money's gone." Paula McCann tweet this

Bruce said that while Vermont laws to protect elders look good on paper — requiring guardians to report their activities to the court for review and giving judges power to remove guardians who don't comply — more rigorous oversight is needed.

Attorneys and state officials say disputes such as the Thomases' are increasingly common as Vermont's population ages.

"We have counties in Vermont that are reaching over 20 percent of population above the age of 60 as the baby boomers are aging and dying," said Paula McCann, who practices elder law in Rutland. "Our probate courts are now part time because of budget issues, and they only have a certain number of staff."

The state's other efforts are similarly limited. Adult Protective Services, the state agency responsible for investigating allegations of abuse, neglect and financial exploitation of vulnerable adults, has 11 investigators. APS Director Joe Nusbaum said his staff's main job is maintaining and updating a statewide registry of people against whom others have made substantiated allegations of abuse. Employers such as hospitals and nursing homes use it to vet potential hires.

Many involve allegations of mishandled money.

"Financial exploitation is the largest percentage of cases that we deal with, and it is also the fastest growing," he said. "It's only getting larger."

Seniors in nursing homes and other group settings have the protection of the Vermont Attorney General's Office's federally funded Medicaid Fraud and Residential Abuse Unit. Its prosecutors regularly get cases alleging theft by a guardian or a family member with power of attorney.

Steve Monde, an assistant attorney general in the unit, said it handles about 12 cases of financial exploitation every year, though not all end up in court. Part of the difficulty in working these cases, Monde said, is the close relationship between the victim and the accused thief.

"There's a lot of gray areas in these [power of attorney] agreements, and an individual's often given a great deal of latitude over making judgments about finances, so it's very hard to say, 'OK, where's the line and when was it stepped over?'"

Sometimes it's pretty obvious when the line has been crossed, as in a case involving a client of Rutland attorney McCann. She recounted walking into her office one Monday morning after a ski vacation.

"And I get a phone call from this client, and he's a wreck — just yelling at me that all of his money's gone," she said.

It was. The client had been working with Donah Smith, an employee at ARC (Advocacy, Resources, Community), a Rutland community organization that helps manage seniors' government benefits. Smith handled a number of clients' bank accounts, and McCann, acting on behalf of her client, gave Smith power of attorney so she could do the same for him.

According to the Federal Bureau of Investigation, between 2008 and 2010 Smith drained thousands of dollars from the accounts she managed to pay her personal expenses. Smith was sentenced in 2011 to two years in prison for federal mail and wire fraud.

"I thought I had vetted her," McCann said.

Since then, McCann has made it a personal mission to prevent her clients and other elderly Vermonters from having their money or credit stolen by people in positions of trust. More than once, McCann has investigated cases and brought findings to the FBI. She doesn't bother going to probate court or to local law enforcement.

"I'd love to tell you that this is a civil matter, in civil court — that we can take care of things. We can't," she said. "If cash has been stolen, you need to get the case criminal as fast as you can. And it frankly needs to go to the FBI because the feds are the only ones who can quickly freeze and then seize assets."

McCann said she works quickly to find a "federal hook" in elder exploitation cases. Sometimes the stolen funds are federal benefits, which puts a case in the feds' jurisdiction, she said.

McCann said many cases are a straightforward matter of stolen money, but others are more creative. In one instance, she said, a man got elderly Vermonters — including a client of hers — to co-sign for more than $105,000 in student loans. He had no plans to pay back the loans, though, and left the elderly Vermonters holding the bag.

McCann's approach to preventing situations like the Thomases' is to encourage transparency. Often, she said, that's as simple as crafting the right legal documents and then holding a family meeting to explain what will happen when the client dies or becomes unable to care for himself or herself.

"That way the elder has, at one time, with all of their people present, expressed their wishes," she said. "And if we can do that ... then chances are we're not going to have any disputes. Because everybody heard Mom or Dad say, 'This is the way it's going to be.'"

Bruce and the siblings who sided with him want Vermont to make situations such as theirs easier to address once suspicions arise. They thought they had all the proof they needed and that their brother's missed filings and alleged self-dealing should have led to his removal as guardian, Bruce said. Despite their multiple filings, Judge Lewis declined to do so until last month.

The judge blamed their side for some of the legal delay — and in 2017 ordered the matter to mediation, which failed.

Bruce and two siblings made repeated requests before Lewis allowed them to look through the estate's records. Bruce said they could have saved some of their mother's money if they'd had access sooner and that the case shouldn't have taken years to resolve.

"Vermont has many laws that are designed to protect wards in a guardianship situation," Bruce said, "but it gives probate courts far too much discretion in whether or not to enforce the laws."

Lewis did not respond to requests for comment for this story. A voicemail message at his office said he is on medical leave.

Bruce and his siblings who joined him in the court case have already spoken to Rep. James Masland (D-Thetford), who represents Miriam's district. Masland told Seven Days he hopes to introduce legislation next year to address their concerns.

Masland would like to give family members the legal authority to view an estate's financial records and to mandate that guardianship records be kept for 10 years to provide a clear picture of an estate's management.

Sen. Dick Sears (D-Bennington) and Rep. Maxine Grad (D-Moretown) chair the Senate and House Judiciary committees, respectively — key panels for any reform to Vermont's guardianship laws. Both told Seven Days that they're willing to have a discussion about guardianship reform in their committees.

Bruce hopes for action. "When you recognize that there's a problem and that the current laws aren't sufficient to deal with it, you have to do something," he said.