Who Is Lenore Broughton? 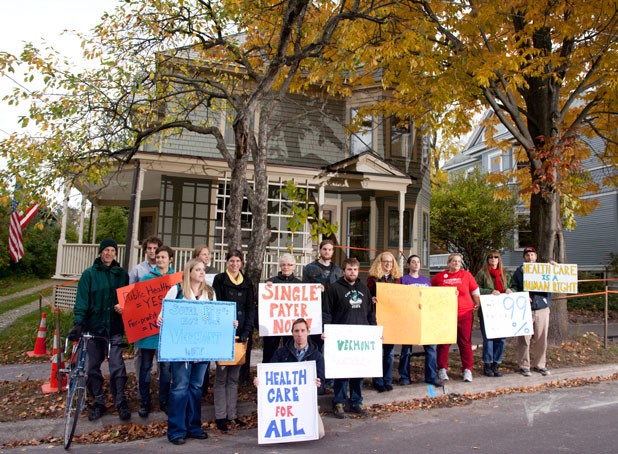 One of the most influential people in Vermont this election year is arguably the least known. Lenore Broughton, a Burlington heiress with a history of funding conservative causes, has shunned the spotlight while her money is drawing attention to a select group of Republicans running for office.

Broughton is the bank account behind Vermonters First, a new conservative super PAC directed by the former executive director of the Vermont Republican Party. To date, she has donated a whopping $682,500 to buy advertising to support her chosen candidates, and to oppose Gov. Peter Shumlin’s attempt to make Vermont the first state with single-payer, universal health care.

Since Vermonters First started airing ads in September, Broughton’s name has appeared in dozens of news stories. But little is known about the woman herself. Even those who call Broughton a friend describe her as “very private” and claim not to have known that she’s the granddaughter of a major American industrialist.

Though a dozen sign-carrying demonstrators recently found her house on Burlington’s Henry Street, there isn’t a single photo of Broughton on the web, and a Google search doesn’t reveal much about her background.

“You can tell just by looking at her she’s a very guarded individual,” says Paul Decelles, a longtime friend of Broughton’s and one of two Republicans on the 14-member Burlington City Council.

A few things about Broughton are well known: She’s a self-described speech pathologist who converted to Orthodox Judaism and is devoutly religious. She’s also the founder and funder of True North Reports, a right-leaning website, and the erstwhile talk show “True North Radio,” which aired for years on Waterbury’s WDEV-FM.

Broughton has steadfastly refused to speak with reporters about her super PAC’s activities. She also declined to be interviewed for this story — both through a spokesman and in person. On a bright autumn day last week, Broughton answered her door clad in a black sweater and politely declined yet another invitation to participate. Nothing, she suggested, could convince her to change her mind.

But with her super PAC, Broughton has gone public in a big way. And she is fast becoming a target for Democrats and single-payer advocates eager to counter the conservative message her money is paying to broadcast to the electorate.

Last week, single-payer health care supporters brought the campaign to Broughton’s doorstep, delivering a letter to her home that asked her to end her “radical” attempts to thwart health care reform. They congregated outside her house with news cameras in tow, while an unmarked Burlington police car monitored the action a block away.

Though Broughton wasn’t home at the time, Vermonters First quickly condemned the visit as an act of “bullying” and “intimidation” by a group funded by an out-of-state labor union. Broughton herself issued a rare statement, saying, “I support Vermonters First because I believed outside groups were coming into our state and drowning out the voices of the people who actually live here. Now I know it for a fact. They’re outside my house. We should not allow ourselves to be bullied in our state, and I’m sure Vermonters won’t.”

Peter Sterling — the head of Vermont Leads, the group that organized the demonstration — rejects the intimidation charge, saying demonstrators were there for all of 10 minutes before peacefully disassembling. Sterling charges that Broughton is funding “false ads” against single-payer, adding that there is no evidence state-run health care would result in long waiting lines and rationing of care.

“If she keeps spending at this rate, it would be a big problem,” Sterling says. “It could just start scaring people. Maybe it doesn’t change their minds, but maybe it scares them.”

What is known about Broughton’s family history comes mostly from U.S. Census records and other public documents available at websites such as Ancestry.com. According to those records, Broughton was born in Chicago in 1938 to Roger Follansbee and Nancy Avery, making her 74 years old. Her grandfather was the famous American businessman Sewell Avery, who made his fortune as president of U.S. Gypsum and Montgomery Ward, and later as director of J.P. Morgan’s U.S. Steel.

Like his granddaughter, Avery had an apparent distaste for government meddling in the private market. In 1944, the Roosevelt administration used emergency measures to forcibly remove him from Montgomery Ward after he refused to settle a strike. That led to one of the war era’s most enduring photographs: helmeted troops carrying a defiant Avery out of his office building in a seated position. He reportedly retired in 1955 with a fortune estimated at $327 million.

According to her friend Ruth Stokes of Williston, Lenore Broughton married T. Alan Broughton, who is now an English professor emeritus at the University of Vermont, but the couple divorced years ago. They have a son together, Camm Broughton.

A former state lawmaker and head of the Vermont GOP, Stokes says Lenore Broughton is a generous philanthropist whose image as a right-wing idealogue isn’t deserved. “She does a lot of charity work that people don’t know about,” Stokes says.

In 1999, Broughton hired Stokes to be executive director of the Vermont Student Opportunity Scholarship Fund, a Broughton-financed nonprofit that provided tuition assistance for K-8 students to attend religious and independent schools in Vermont.

School choice has been a big cause of Broughton’s and, in effect, she took it upon herself to implement it. The scholarship fund provided as many as 100 tuition grants per year to students who were being bullied or for some other reason didn’t fit in at public schools, Stokes says. The maximum grant was $2000 — nowhere near enough to cover full tuition at most schools — so parents and schools had to come up with the difference.

From 2005 to 2009, the scholarship fund received donations totaling $414,840 — most but not all of which came from Broughton, Stokes says. She shelled out another $130,000 for a separate school-choice project, creating an online catalog of independent education opportunities, according to John McClaughry, who worked with Broughton on the catalog.

Broughton also remains president of a Chicago-based foundation called the Broughton Fund, which dispersed almost $835,000 in donations between 2005 and 2009, according to public tax records.

Politically, Stokes describes Broughton as a principled conservative who “believes passionately in this country” and in the defense of Israel. “It’s not just that she’s a right-wing political zealot, because she isn’t. She just believes that, in Montpelier, it’s been very hard to get the other side heard.”

On a personal level, Stokes says that while Broughton is “quite a wealthy woman,” she doesn’t live a lavish lifestyle. “She uses her money for what she believes are good things,” Stokes says. Whether — and how much — Broughton has given to other charities is not known.

But the money she has pumped into politics has been behind the scenes and, apparently, without too many strings attached.

“She’d talk to candidates and give them her point of view, but you weren’t going to see her showing up at strategy meetings,” says Paul Beaudry, a former host of “True North Radio” and a 2010 GOP congressional candidate.

According to a recent analysis by VTDigger.org, Broughton has directly donated $68,250 to national Republicans in this election cycle alone, making her the sixth-largest donor — of any party — in Vermont.

Among the recipients of Broughton’s largesse are hard-right Republican candidates such as Minnesota Congresswoman Michele Bachmann, vice presidential candidate Paul Ryan and U.S. Senate candidate Richard Murdock, the Indiana Tea Party favorite who knocked off longtime Sen. Dick Lugar in a primary this year. She has also donated at least $8500 to the Vermont Right to Life Committee in the past decade, according to Federal Election Commission records.

Broughton founded True North Radio a decade ago and recruited Laurie Morrow, an English professor from Montpelier, to be one of the program’s first hosts.

“Lenore wanted to get a conservative female voice out there because there weren’t any,” recalls Morrow, a self-described “notorious conservative.” “She gave me complete creative control. I told her later how grateful I was. And she said, ‘Laurie, I just believe in you.’”

Some of the people closest to Broughton wouldn’t comment for this story. Tayt Brooks, the longtime GOP operative who is running her super PAC, did not return numerous phone calls seeking comment about Broughton. Nor did Rob Roper, who is news director of True North Reports and has served on numerous boards with Broughton.

Ditto Wendy Wilton, the state treasurer candidate who also knows Broughton and has been a beneficiary of her super-PAC ads.

Democrats, meanwhile, have been eager to fill in the blanks and portray Broughton as a radical, right-wing “millionaire” funding dubious ads. Dems pounced last week when Vermonters First ran afoul of an obscure state law banning use of the state seal in advertising. At least temporarily, it put a stop to commercials supporting Wilton and state auditor candidate Vince Illuzzi.

Despite her aversion to publicity, Broughton serves on at least one public board — Burlington Telecom’s Cable Advisory Council. She was appointed in January 2011 and has attended six of eight meetings in the past year and a half, according to BT general manager Stephen Barraclough.

Broughton opposed BT’s inclusion of Al Jazeera English in its cable TV lineup years ago, a cause taken up by a group she funded called the Defenders Council of Vermont. Broughton was treasurer of the nonprofit group from 2007 to 2009, during which time it received $150,300 in funds, according to public tax filings.

According to its website, the Defenders Council of Vermont was formed to “educate the citizens of Vermont about the nature, reality and threat of Islamic Jihadism.” The website says the group would host “living room events,” in which a DCV representative would meet with concerned citizens in their homes or public spaces to discuss “the threats America faces from radical Islam and the explosive nature of Islamic Jihad.”

But after two years, the group fizzled. “We didn’t have an Islamic incident in Vermont, except for that Burlington Telecom, Al Jazeera controversy,” says McClaughry, who served on the nonprofit’s board. “We didn’t really have something where radical Islamists were trying to slip stuff into the school system or anything where we might have raised a protest.”

Broughton and her allies lost the Al Jazeera fight, but today have apparently taken up a new one. BT’s Barraclough says the Cable Advisory Council wants to remove Free Speech TV — a left-leaning network that broadcasts shows such as “Democracy Now!” — from Burlington Telecom’s lineup.

“That’s simply not going to happen,” he says.