Who Chooses That Annoying Music on Ice Cream Trucks? 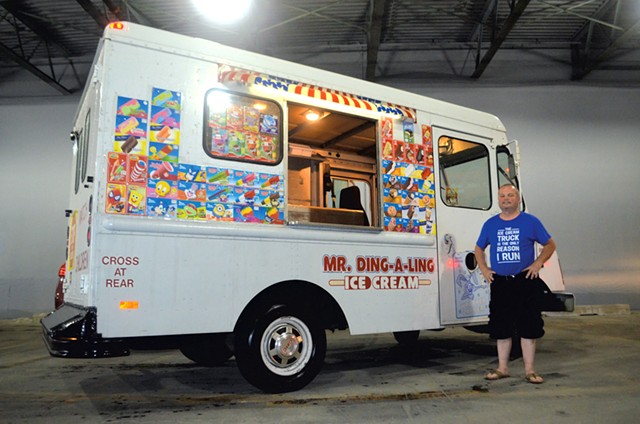 If Ivan Pavlov were alive today and conducting his now-famous research on behavioral conditioning, he could ditch the dogs altogether and instead study the saliva-inducing properties of ice-cream-truck songs on children. Whether it's Scott Joplin's "The Entertainer," the Sherman Brothers' "It's a Small World" or the old English nursery rhyme "Pop Goes the Weasel," those tinkling tunes echoing through the streets cause kids to tilt their heads like cocker spaniels and come running. Meanwhile, adults grit their teeth and get out their wallets.

Love them or endure them, ice cream trucks and their continuously looped jingles signal summer as much as cicadas and Fourth of July fireworks. But who decides on the music they play? Does one driver have the corner on "Home on the Range" while another gets "Yankee Doodle"? And what's with the racist overtones behind that classic ditty "Turkey in the Straw"?

To get the scoop on such ice-cream-truck trivia, I reached out to Vermont's own Mr. Ding-A-Ling, Gary Hathaway. If you've ever bought a Bomb Pop or Good Humor chocolate éclair from an ice cream truck anywhere between Barre and Malone, N.Y., chances are it was one of his.

Hathaway and his crew, most of whom are his relatives, are now in their 17th year of slinging strawberry shortcake bars and Creamsicles in Vermont and New York. Each year, from April through September, Mr. Ding-A-Ling's seven trucks travel thousands of miles — some log more than 100 per day. Guess it's not such a small world after all.

The 58-year-old Colchester native, who works as a professional wrestling promoter the rest of the year, leases his trucks from a business in Albany, N.Y., that owns about 100 in the region. Each truck has a digital jukebox; some can play only four songs, while others have 32. Each driver decides which songs to play on his or her route.

While Hathaway admits that some people get irked hearing the same melody played on repeat, "The drivers don't seem to mind it at all ... But there's always somebody who doesn't care for [the music] or is just having a bad day."

Do other ice cream trucks try to muscle in on his musical marketing? Hathaway says that's never been an issue. Despite the proliferation of food trucks in recent years, Mr. Ding-A-Ling doesn't have much competition. (His is the only such truck registered in Burlington.) Nevertheless, if a competitor were to start blaring "The Entertainer" in Hathaway's territory, he says he wouldn't sweat it. After all these years in the biz, "We've figured out all the tricks and worked out all the bugs ... Do what you gotta do."

Some of those tricks of the trade involve catering business parties and other private functions, including some rather unusual ones.

"The funniest one I ever did was a funeral. [The hosting family's] father loved the ice cream truck, and they called me," Hathaway remembers. Though he admits it felt weird doling out frozen treats to mourners in the middle of a cemetery while "It's a Small World" played in the background, "It was a big hit."

"Turkey in the Straw" probably won't be making the rounds on Hathaway's routes anymore, however. If something about that tune seems eerily reminiscent of a Ku Klux Klan rally, there's good reason.

As Theodore R. Johnson III, a writer for National Public Radio's "Code Switch" podcast, explores in a May 2014 story, the actual name of that 1916 song is "N****r Love a Watermelon, Ha! Ha! Ha!" How this grotesquely racist song became associated with something as innocuous as ice cream — or turkeys, for that matter — is a story in itself. But, as Johnson explains, 19th-century ice cream parlors often played songs popularized by traveling minstrel shows rooted in the Jim Crow era. After World War II, when ice cream trucks began hawking frozen treats to suburbanites, "The traditional minstrel tunes of the previous century were employed to evoke the memorable parlor experience," Johnson explains.

Hathaway, who only recently learned about the song's origins, says he's since asked his drivers not to play it anymore, "especially in Burlington, where we have such an array of cultures here. I don't want to hurt anyone's feelings."

Indeed, Hathaway tries to be sensitive to the concerns of his customers, particularly the youngest ones. If, for example, a child doesn't have any cash and the driver knows it, he or she will often spot the child a free ice cream. As Hathaway puts it, "It's really sad to watch a kid walk away from the truck empty-handed."

So, what's new on the frozen-treat horizon? Hathaway reveals that, by spring 2018, he hopes to have his first Mr. Dinghy-Ling — an ice cream boat that will ply the waters of Lake Champlain. No word yet as to whether it'll announce its arrival with nautical-themed tunes. But if it does, one can only hope they'll lean more toward Bobby Darin's "Beyond the Sea" than "I'm Popeye the Sailor Man." After all, we'll likely be hearing them from shore, over and over, all summer long.

The original print version of this article was headlined "Who Chooses the Music Played on Local Ice Cream Trucks?"

Connecting With the Land Around Ripton's Spirit in Nature Paths

Chart Your Approach to Midwinter With 'Staytripper'
Top Stories