Who Built the Otter Creek Dugway, and Why? 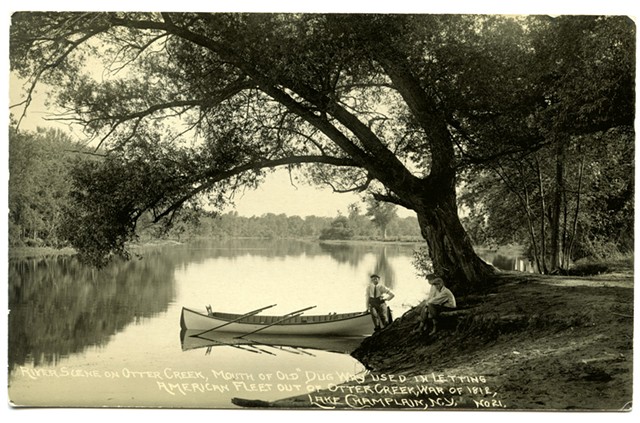 When reader Karl Riemer of Underhill emailed recently to ask, "Who dug the Dugway between Otter Creek and Fields Bay, when and why?" my initial response was "WTF is the Dugway?" I've been to Otter Creek, but I've never explored the seven-mile stretch of river that runs between Vergennes and Lake Champlain. There, according to locals familiar with the area, one can find a crooked, apparently artificial channel that — when lake levels are high enough — serves as a shortcut to the lake.

"Today it's plainly visible and intriguing," Riemer writes, "but no one seems to know its history." That's not to say there haven't been plenty of theories about the Dugway, including some that found their way into official state documents. A road in Vergennes is even named after it — Dugway Lane. Yet answers about its origins remain frustratingly elusive.

First, some history to set the stage: Vermonters may know modern-day Vergennes as the state's oldest and least populous city, as well as the home of the Basin Harbor Club, the Kennedy Brothers building and Route 22A's* most reliable speed trap (damn you, 25 mph speed limit signs!). During the 18th and 19th centuries, however, Vergennes was an industrial powerhouse that produced and transported timber, potash, iron, warships and various agricultural products.

Driving Vergennes' industrial engine at the time was Otter Creek, Vermont's longest river, whose length the Encyclopaedia Britannica puts at "about 100 miles." Because the creek is navigable below the falls in Vergennes, the city played a decisive role in the War of 1812. It's from that conflict that one story — or myth, depending on your point of view — of the Dugway's origins arose.

Do a quick Google search on "Otter Creek" and "Dugway," and you're bound to come across references to "Macdonough's Dugway." Commodore Thomas Macdonough Jr. (1783-1825) was a U.S. naval officer who, in September 1814, defeated the British at the Battle of Plattsburgh. It was considered a turning point in the war.

Six months earlier, in March 1814, Macdonough had received orders from the U.S. government to start building a new fleet in Vergennes. According to Proceedings of the Vermont Historical Society: 1913-14, on May 14, Macdonough "came down the river with a new sloop of war and several galleys"; within 90 minutes, he forced the British to retreat. That naval battle wasn't exactly a bloodbath. The Americans suffered no casualties, and the Brits lost just one seaman and a couple of rowboats.

Here's where the historical record gets fuzzy. According to several secondary sources, Macdonough's men allegedly dug the Dugway — in a single night — as a way to sneak their gunships into Lake Champlain and then flank the British vessels that had blockaded the mouth of Otter Creek.

A November 1, 2012, story in the Akwesasne newspaper Indian Time, titled "Tobacco Burning at Otter Creek," claims it was the Onkwehonweh, or "original people," living along Otter Creek who dug the channel for Macdonough's fleet. Other sources, including one referenced on the Vermont Fish & Wildlife Department website, suggest that the dugway, or "dugout," was created during the Revolutionary War — again, as a means of outmaneuvering British warships.

Obviously, these stories have been kicking around for a while. Bob Mitchell, 83, of Ferrisburgh is a lifelong Addison County resident and a self-described history buff. Having grown up near Otter Creek, he's heard those same stories of the Dugway's origins since he was a kid — and even offers directions to the artificial channel, which sound like something out of a 19th-century land deed.

"At the 6.5-mile mark," he says, "look for two dead trees standing like sentinels at the far bank. In front of you, the Dugway will be on your left."

But Riemer skewers all these Dugway-origin legends. He argues that the Revolutionary War boat works were at Skenesborough (now Whitehall, N.Y.), not Vergennes. Moreover, during the War of 1812, the Vergennes shipyard was protected by Fort Cassin, so ships required no back channel to escape Otter Creek. Riemer also pooh-poohs hypotheses that the Dugway was a defensive moat against overland assault, or a natural anomaly. Both ideas, he says, are "patently absurd."

In a 2011 book on the history of the area, titled Some Field Family Journeys: Selected Descendants of Roger Del Feld, Warren James Field floats the theory that the Dugway was created by Revolutionary War veteran Platt Rogers, who'd settled in Ferrisburgh and owned property stretching from the mouth of the river to Basin Harbor. Field suggests that Rogers created the dugway "to shorten the route for the inhabitants south of the river whither they came by boat from as far south as Chimney Point for the grinding of grain."

If that's the case, their boats must have been built for very shallow water. Erick Tichonuk, deputy director of the Lake Champlain Maritime Museum, points out that, even when the Dugway is underwater, it's only two or three feet deep. For this and other reasons, Tichonuk concludes that the shortcut likely had nothing to do with Macdonough or his skirmishes.

"To date, we have found absolutely zero historical documentation in primary sources to support this claim," he says. "It's a great story, but it's probably bull."

So who dug the Dugway? Alas, its true builders seem to be lost in the murky depths of the past. That's probably of little concern to the few kayakers and fishermen who can still navigate its waters — that is, when it's not high and dry.

*Correction: October 17, 2016: An earlier version of this story misidentified the location of the Vergennes speed trap. It is on Route 22A.