WTF: Why does a Burlington house tell passers-by to "cut consumption, not foreskin?" 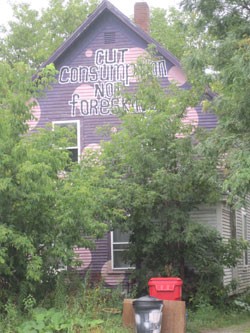 Last summer, baseball fans leaving Burlington’s Centennial Field through the front gate got a surprise. The house at 276 Colchester Avenue had long been painted an eye-catching purple with pink polka dots. But now it bore a slogan in bold black letters with white outlines: “Cut consumption, not foreskin.”

Across the street, workers at Kampus Kitchen whispered that the house’s owner and his tenants were part of a nudist cult. This wasn’t entirely without reason. According to Jessica Oski, a former Colchester Avenue resident, the home’s owner, Jerri Kohl, “would regularly appear naked around his house and on a monthly naked bike ride.”

Kohl’s habit of leaving his lawn wild and untended also annoyed some neighbors and added to his mystique. Another neighbor, David Grist, who’s employed at Gardener’s Supply Company and has never met Kohl, says, “I believe people should be able to have their yards the way they want them to be, within reason. However, you’ve gotta be part of the community.”

Oski, who has met Kohl, describes him as “a good guy” with compassion for people’s differences. That’s why she says she was surprised when the slogan went up on his house last year. “The foreskin part seems a little judgmental,” she says. “Not a trait I usually attribute to Jerri.”

Many folks in the neighborhood seem to see Kohl as an enigma. When he first moved in a decade ago, Kohl now recounts, rumors circulated that the woman with whom he lived at the time was an heiress. Another rumor claimed he had left California after making a mint in the dot-com boom. That one was closer to the truth.

When Seven Days reaches him on the phone, Kohl turns out to be a cheerful 37-year-old, far from a sinister cult leader or deranged hippie. The Fairfield, Conn., native says he did indeed settle in the Bay Area, where he cofounded Simpler Software. When his colleagues yielded to the requests of venture capitalists and switched the company’s focus to software for the newly deregulated wholesale electricity market, Kohl headed to Vermont, where he had vacationed for years.

Kohl holds a patent for a web-based system called AppEase, which makes it possible to develop applications without writing any code. He has let it lapse and never patented a related invention.

But what about the house? When Kohl moved to Vermont, he says, he decided to put a long-term plan in action.

“When I was in middle school, I told my dad I was going to paint my house purple with pink polka dots when I grew up,” he says. “He told me you can’t do that — that there are rules, regulations and laws against such a thing.” Kohl proved his father wrong.

Having made his house stand out, Kohl decided to make a statement with it, too. As long as he’s owned the house, he says, he’s wanted to paint a slogan on it “that would be humorous, while at the same time provid[ing] a message about the environment. I wanted it to be fun and wacky, so that people wouldn’t disregard it as merely polemical, and the serious message could then sink into them more gently.”

The environment isn’t Kohl’s only pet cause. One day while in the shower, he figured out how to combine those concerns with another topic close to his ... heart.

“I believe male circumcision is male genital mutilation, causes a lot of trauma, perpetuates male violence (due to unresolved trauma) and reduces sexual pleasure,” says Kohl, who became a member of the foreskin reclamation movement in 1995. At the time, he says, it was a fringe issue even in the gay community, where it had gained the most momentum. “In case you’re wondering, circumcised men can regrow their foreskin,” he adds.

Since last summer, many locals have tried to figure out Kohl’s intentions. One even called “The Dennis Miller Show” on the radio to talk about the house’s message.

Miller was bemused. One poster on his website ventured the explanation that “all left-wing causes are related.”

Kohl’s house has also been mentioned in an online forum for Mothering magazine, whose readers were more supportive. Animated icons are splashed across 19 posts proclaiming, “Awesome!” and “Wow! That is too cool!”

For his part, Kohl is surprised by all the ballyhoo about what he thought was a simple, humorous slogan — applied, he points out, with natural, compostable paint.

“The message is really that simple,” he says. “There’s nothing hidden. I didn’t expect it to cause so much confusion, actually.”