WTF: How does 3-D work, and is it worth your money? | WTF | Seven Days | Vermont's Independent Voice

WTF: How does 3-D work, and is it worth your money? 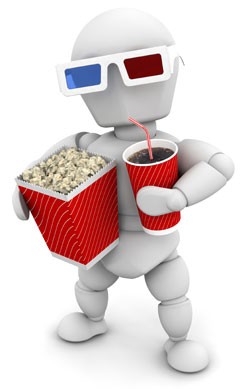 On April 1, 2009, one 3-D movie was playing in Burlington-area theaters — a cartoon. This April 1, there were four, only one of them animated. Blame Avatar. That blockbuster showed theater owners that people will pay higher ticket prices for a live-action 3-D experience, which translates into profits for an embattled industry.

Locally, the Majestic 10 in Williston and the Essex Cinemas started using 3-D digital projection systems early in 2009. Nearly a month ago, Montpelier’s Capitol Showplace jumped on the 3-D bandwagon using a 35-millimeter film-based system. So they’ll all be ready for Phish 3D when it opens nationwide on April 30.

Here’s the thing: Taking a family of four to one of these spectacles will run you nearly 40 bucks (in Manhattan, it’s closer to $60). So it’s worth asking: What’s up with the new dimension? Are all 3-D movies as cool looking as Avatar? And how do you know if 3-D is going to make you sick to your stomach?

Devices that produce the illusion of depth perception have been around forever. I have an old-timey gadget called a stereoscope: a card printed with two side-by-side photos of a suspension bridge. Gaze through the goggles attached to the card by a metal frame, and you see one bridge, now in 3-D.

Basically, 3-D film projection systems work the same way. For each shot, the camera (or cameras) captures two images corresponding to the positions of the virtual viewer’s left and right eyes. In the theater, special glasses use polarization, interference filtering or LCD shutters to pipe each set of images to the appropriate eye of the real viewer — and, presto, that spear is in your face.

Back in the 1950s, the double image could only be created by running two projectors in sync, which created massive headaches for theater owners (and viewers, since sync problems caused queasiness). Nowadays, the same film reel or digital hard drive can hold both images, superimposed or presented successively.

Right now, there are three competing digital 3-D projection systems. (The Majestic uses Dolby’s 3-D, Essex has its main competitor, Sony’s RealD, and the Capitol uses Technicolor’s 3-D for regular film.) The jury’s still out on which combination of lenses and goggles gives you the best optical illusion.

But now there’s another factor to consider: Was the movie shot in 3-D, with binocular versions of each shot? Or has the extra perspective been added? If you saw the Clash of the Titans trailer back in December, you may have noticed it wasn’t in 3-D — because the movie wasn’t. A rush job by a company called Prime Focus, inspired by the massive success of Avatar, gave it some depth. Alice in Wonderland was also retroactively “Dimensionalized” — to use the roll-off-the-tongue term trademarked by another conversion company, In-Three.

Basically, this means scores of technicians went through the flat film on a computer, decided what should jump out, and used digital magic — rotoscoping and painting — to give it the illusion of volume. Prime Focus converted Titans in about 10 weeks to the tune of $50,000 to $100,000 per minute of footage, according to the Hollywood Reporter. Director James Cameron is among those criticizing the process, claiming it doesn’t look as good as “real” 3-D (which somehow hasn’t stopped him from planning a 3-D conversion of Titanic).

But do audiences care? Dale Chapman, manager of Essex Cinemas, says that “to the average person,” as long as filmmakers aren’t “being hokey” in their use of 3-D, “it’s gonna be an incredible experience.”

People may be less likely to critique unconvincing 3-D than they are to complain that the optical illusion is making them want to hurl. Dozens of articles have surfaced about moviegoers who complained of headaches and nausea during Avatar. Two of my Seven Days coworkers say they experienced this problem.

Chapman believes digital projection has eliminated most of the nausea risk, and says he’s heard from only three or four moviegoers who suffered ill effects: “Their eyes or their body can’t handle the 3-D aspect.”

Scientists have yet to produce hard numbers of people made queasy by 3-D, and the explanations seem, so far, hypothetical. According to Anahad O’Connor’s health blog for the New York Times, “unnatural eye movements” are to blame. Some suggest the solution is not to look at parts of the image the director has left unfocused. Meanwhile, the Vestibular Disorders Association maintains the problem is “sensory conflict” that happens when your eyes tell you you’re flying and your inner ear tells you you’re sitting in the Majestic 10.

With 3-D TVs ready for market and 3-D broadcasts planned, we can expect to see more research soon. For now, though, nausea doesn’t seem to be putting any dent in the profits of Avatar, Alice, et al. If 3-D becomes as standard as stereo sound, in 20 years we could all be referring to 2-D films as “flatties.” Or dismissing dimensionality, once again, as a fad. Time will tell.