Which Woman Will Lead the Burlington City Council? 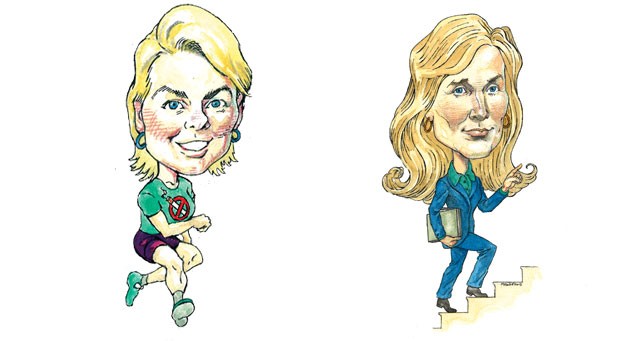 Whenever politicians insist their actions aren’t motivated by partisan interests, it’s safe to assume the opposite is probably true.

Case in point: the April Fool’s Day showdown for the presidency of the Burlington City Council. The race between incumbent Democrat Joan Shannon and independent challenger Karen Paul appears headed for a dead heat, with all seven Democratic councilors seemingly solid for Shannon and the seven non-Democrats — four Progressives, two independents and the council’s lone Republican — tilting toward Paul.

Despite that split along factional lines, the candidates’ respective supporters maintain their preferences aren’t based on partisan politics. But the fact remains: The struggle for control of the council gavel is central to the struggle for political ascendancy in the Queen City. Both sides want to translate their March election victories into power to set the agenda.

As the largest bloc on the council, the Democrats believe they’re entitled to emcee the Monday night council meetings in City Hall Auditorium. Everyone else worries that a Democratic council president, in cahoots with the Democratic mayor, will solidify Burlington as a one-party city and steamroll minority interests.

Having gained a fourth council seat on Town Meeting Day, Progressives see themselves as making a full recovery from the wasting disease brought on by the Burlington Telecom scandal. The Progs are determined to prevent the Dems from claiming the city’s second most powerful elected office. “We’ll be voting as a bloc,” says Councilor Rachel Siegel (P-Ward 3).

But councilors will also be listening this coming weekend to sales pitches from both Shannon and Paul. It’s possible a closed-door deal could be made prior to next Monday’s vote in order to avert what could be seen as an embarrassing, Washington-style inability to compromise. That could lead to agreement on a third candidate — and there would be no shortage of councilors volunteering to step into that role.

For now, though, it’s a straightforward face-off between two women generally respected by their elected peers. And in addition to pure politics, the race does involve substantive matters and issues related to the council’s process.

Some of Paul’s backers complain that Shannon has failed to ensure that all 10 council committees meet regularly. The Public Safety Committee has not gotten together in over a year, even though its agenda includes controversies such as the council’s move to ban assault weapons in Burlington.

“I’ve asked her several times to convene that committee,” says Councilor Max Tracy (P-Ward 2). The Old North End section he represents is suffering the effects of “a heroin epidemic,” Tracy says, but the council committee that should be addressing it is missing in action.

“That’s a fair criticism,” Shannon concedes. She agrees she should have leaned harder on committee chairman Bram Kranichfeld, a Democrat who didn’t seek reelection to the council. “There’s going to be a new chair,” Shannon promises. “Things will be different this year.”

Another Democrat, Dave Hartnett of Ward 4, offers to take the fall for Shannon. A member of the Public Safety Committee, Hartnett says it’s his fault that the panel didn’t meet. It’s not the council president’s responsibility to prod committee members into doing their duty, Hartnett suggests. “We don’t need to be babysat all the time.”

The composition of committees is another source of disgruntlement for Paul supporters. They charge Shannon with playing political favorites in the appointment process. Councilor Paul Decelles (R-Ward 7) recalls that Prog-friendly independent Councilor Sharon Bushor was unceremoniously ousted last year as chair of the Human Resources Committee. Democrat Norm Blais, then serving his first term, replaced Bushor, who has been on the council for 25 years.

For her part, Bushor says her vote for Paul won’t be an act of retaliation for that ouster. Bushor does note, however, that she wasn’t warned she’d be losing the committee chair and says the council president should make sure such decisions don’t catch councilors “by surprise on the night when they’re announced.”

“You need to have difficult conversations with councilors in advance,” says Bushor, who was council president for four years.

Hartnett defends Shannon against this criticism, too. “It’s impossible to please all 14 councilors when it comes to committee assignments,” he says. “I wanted Parks [Arts and Culture] in the worst way. I didn’t get it, and you know what? I moved on.”

Hartnett has credibility when he claims, “I’m not supporting Joan because she’s another Democrat.” He doesn’t attend the party’s Sunday night caucuses, and he occasionally votes against proposals favored by Democratic Mayor Miro Weinberger and the council’s Democratic bloc. “I’m supporting her because she’s done a good job,” Hartnett explains.

None of Paul’s supporters are critical of the way Shannon has run council meetings during the year she’s been in charge. “She’s been fair,” says Siegel, who occupies the seat beside Shannon at council meetings. Siegel’s fellow Ward 3 Prog, Vince Brennan, complains that Shannon hasn’t always been forthcoming with information, “but I’m not saying she’s hidden anything from us purposefully.” Jane Knodell, another former council president who’s returning to the council after a four-year hiatus, adds, “Joan runs a good meeting.”

Some councilors do grouse, however, that Shannon has on occasion scurried to do the mayor’s bidding. They point specifically to pressure from the council president for quick action in support of Weinberger’s “fiscal stability bond.”

“I cast the only vote against it, but it seemed that night that about three-quarters of the council had misgivings about it,” Decelles recalls in regard to the $9 million bond issue that Weinberger said was vital to the city’s solvency. Knodell adds, “If I had been on the council then, I’d certainly have wanted more time to consider that.”

In her own defense, Shannon says the council needed to act quickly in order to get the bond onto last November’s ballot. It subsequently won support from more than 70 percent of the city’s voters.

For some councilors, the vote is less about how the council is run than who controls the agenda — and about establishing an alternate power base to counterbalance the mayor’s office.

“City government works best with strong checks and balances,” Tracy philosophizes. “We need a city council that’s not afraid to ask questions and to hold the mayor’s feet to the fire, especially on finance issues.” Knodell agrees, noting, “The Democrats worked hard to win an eight-seat council majority. They didn’t get there. Now we need a healthy balance of power.”

Paul, who has represented Ward 6 in the Hill Section for the past five years, alluded to all these points in a recent email message asking councilors for their support. She made similar comments in an interview on Monday.

Referring to the matter of committee assignments, Paul says, “There’s no question I could address it in a more fair and equitable way.” Under her independent leadership, Paul vows, “assignments would not be treated as a reward for votes.”

In her message to councilors, Paul further promised to ensure “political diversity” on each committee while “honoring tenure on the council.” Paul also stated her “belief that all committees should meet on a regular basis.

“All information will be shared immediately and with equity,” she added. “Political interests and agendas are not part of the equation.”

Paul’s liberal supporters aren’t necessarily backing her because they view her as left of Shannon. Asked to compare the candidates’ politics, Bushor says, “They’re about the same.” Brennan has concerns about Paul’s “business emphasis,” adding that he’s “had to educate her on the benefits of the livable wage.” Siegel describes Paul’s politics as being “all over the board.” It’s hard to predict how she’ll vote on some issues, Siegel says, hastening to add, “That makes her a true independent.”

Paul, 51, describes herself as a “fiscal conservative and a social liberal.” On her city councilor website, the fourth-generation Burlingtonian says she eschews party labels because “I believe in going [sic] what is practical and not political.” Paul also cites her service on numerous public and nonprofit boards. Most of her colleagues respect Paul’s expertise on financial issues, which she demonstrates by sometimes challenging the claims and performance of the Weinberger administration. But Paul has also literally stood by the mayor’s side at news conferences announcing various initiatives.

Shannon, 48, also sees herself as more public-spirited than political. She says she takes pride in presiding over “civil discussion” on emotional issues such as gun control, the police rubber-bullet barrage aimed at protesters last summer and “creating a safe zone for women seeking health services” — a reference to the no-protest zone created around Planned Parenthood. Shannon also touts her leadership in bringing the full council into discussions with city department heads as part of the budget-building process. “Going paperless” is another council initiative she has worked to implement, Shannon points out.

Apart from the ego massage the council presidency provides, it isn’t clear why anyone would want the job. It doesn’t pay any more than the annual $3000 stipend every councilor gets, but entails significantly more work. Shannon figures she spends at least 20 hours a week on council business.

Both candidates have children: Shannon has a 10-year-old daughter; Paul is the mother of three teens, two of whom still live at home. They’re career women as well. Shannon works as a realtor, and Paul runs a financial-planning firm.

A couple of their colleagues see another motivation underlying the council president’s race: They believe both candidates harbor mayoral aspirations. That may help explain the current competition, even as each denies she is running in opposition to the other.