Where to Do Karaoke Every Night of the Week 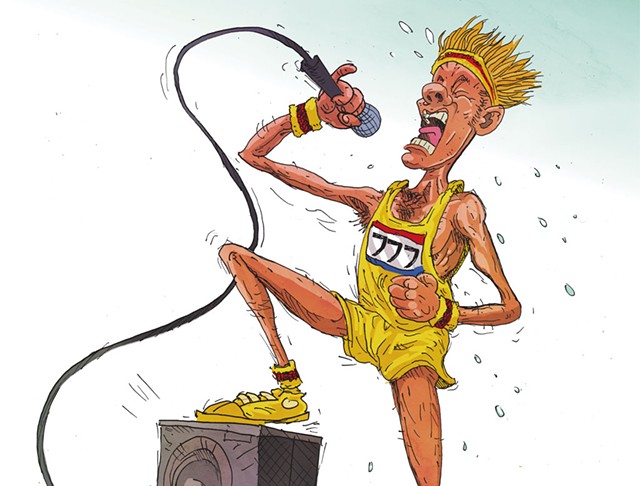 Love it or hate it, karaoke is fully embedded in our entertainment culture, and isn't going away anytime soon. In fact, it's possible to sing karaoke every night of the week and not rock the same mic twice. How do we know? We did it.

Seven Days recently combed the state looking for lively karaoke seven nights in a row. Here's what we found.

Sometimes referred to as "industry night," Monday night at Manhattan Pizza & Pub is known to draw folks who work in the restaurant and service industries — though the clientele is hardly limited to that. A true ragtag bunch, singers at the downtown Burlington joint keep the audience tapping their toes with selections from Bill Withers to Evanescence.

Rob Jones, drummer of gospel-infused funk band Funkwagon, hosts the weekly session, which runs only a scant two hours. With such a short window for rocking out, you might wonder: Why do it at all? After all, a large portion of Monday night's clientele isn't there for karaoke, anyway. But the core group of singers approaches the night with the utmost professionalism and will likely argue that two hours is better than nothing.

The folks who flock to Charlie-O's World Famous on Tuesdays are an eclectic group. Twentysomethings to septuagenarians throw down a hot mix of hits across multiple genres. And despite his aggressive moniker, DJ Vociferous (Justin Tosh) hosts the night with easygoing charisma and charm — and sings with a full, saturated baritone.

One quirk about the storied venue is that the performance area is squarely on top of a trap door. There's a vague sense that if you hit a wrong note or come in late on the chorus, someone might pull a giant lever and send you plummeting into a holding cell for bad singers.

Before the festivities begin, a screen saver on the karaoke monitor boasts that local talent and special guests are likely to stop by. And, based on a recent Tuesday evening, it's accurate. Cobalt Tolbert of defunct math-rock band Coquette and live karaoke band Guano Loco (who play down the street at Sweet Melissa's on Sunday nights) performed an exhilarating rendition of Eminem's "Rap God." Hopefully, you'll catch something equally thrilling.

If you arrive early to this Addison County hot spot, you might think you showed up on the wrong night. It can be crickets and tumbleweeds before things get started. But once diners make a mass exit from the Little City on the Falls' cluster of restaurants, they turn the sleepy subterranean dive into a rip-roarin' rager.

For the last six years, Amanda Rock of the party band Toast has held down the fort — though the night has long been known for karaoke. If it's not too busy, Rock — yes, that's her real last name — puts herself in the mix, offering a sizzling sample of what she brings to her band.

Singers favor contemporary country tunes here — perhaps unsurprisingly, given that Vergennes is surrounded by farmland. And the crowd is especially congenial. Even if you're a first-time customer and don't know a single person there, you'll be welcomed heartily. And if someone happens to be celebrating a birthday that night — which happens often at karaoke — don't be surprised if someone offers you a slice of cake.

Ask a random Burlingtonian where to do karaoke, and they'll likely tell you JP's. That's because the dive-y watering hole devotes Wednesday through Saturday evenings to it. Though weekends are far more popular — you'll be lucky to sing once — weeknights can get pretty crazy, too.

The pub attracts many talented singers, but you're more likely to see the type of karaoke-ers who think it's fun and entertaining to essentially humiliate themselves by not taking it seriously. And that's fine if people are having fun. But committed singers will likely lose their patience after a while — though host Melody Pagliuca keeps her cool even when drunkards are harassing her and blaming her for their failures. (Hot tip: Hold the mic closer to your mouth if you want to be able to hear yourself.)

One of the oddest things about JP's karaoke is the high likelihood of hearing a Disney song ... butchered. If only those Alan Menken-era ballads like "Part of Your World" and "A Whole New World" had percussion, maybe the average singer could keep the beat.

St. John's Club flies under the radar in Burlington nightlife. Since it's a private social club, you can't just show up — unless it's Friday night, when the club is open to the public. It's also karaoke night, which host Dave Bourgea took over approximately a year and a half ago.

Walking into St. John's feels a bit like showing up late to a wedding reception. The large room with long rows of tables and chairs is more reminiscent of an event hall than a nightclub, and attendees mix and mingle like family.

If you're under 40, there's a good chance you'll be one of the youngest people in the room. Accordingly, you're going to hear a lot of oldies. On a recent Friday evening, only a few jams from the '80s or later cut through the string of hits from the Beatles, Stevie Wonder, Carly Simon, Jim Croce, Gladys Knight & the Pips, and Johnny Cash.

Despite its ritzy name, Park Place Tavern is a quintessential dive bar. For the last six years, Mike Lambert has hosted the bar's weekly karaoke night, which he originally held at a nearby campground on holidays. He says that the Saturday night singathon used to fly more under the radar but recently has inexplicably become popular. On a busy night, you're likely to wait two hours between turns on the mic.

Lambert's PA setup has the distinction of being far and away the loudest of any karaoke night included in this survey. You'll want to sit as far away from the amps as you possibly can, lest your ears ring for the rest of the night. But for a singer, loud is better than quiet.

Folks like to dance at this karaoke night more than other places, too. Slow dance, line dance, bump-n-grind — the denizens of Park Place Tavern shake it 'til they make it.

According to Samantha Dickey, host of Ruben James' late-night Sunday karaoke, the Burlington bar sometimes struggles with identity. Is it a sports bar or a dance club? Karaoke café or New England Patriots booster club? Either way, the post-football session proves to be a wild way to end the week.

Cordless mics and multiple cue screens allow singers the freedom to strut around the bar while singing. Feel free to weave through the crowd, members of which might be elated or perturbed depending on if the Pats won or lost. Regardless, this is a crowd that likes to sing along — louder and more confidently than most.

Given that RJ's primarily attracts a college-age crowd, you're going to hear mostly pop and rap tunes here. And even though the pub's occupants may seem a bit unhinged, they can hold their own on the mic.

The original print version of this article was headlined "Sing, Sing, Sing"