Where to Buy Legal Weed in Vermont on October 1

On Saturday morning, October 1, adult-use cannabis retailers in Burlington, Middlebury and Rutland will open their doors for the first time. Here's what you need to know about Vermont's big day.

The folks at Ceres say they only just finished setting up their store. But it will be open, and it will have weed. That's according to Russ Todia, the company's chief operating officer.

"We're not going to have a tremendous selection," Todia acknowledged. But they'll sell 12 different strains of smokable cannabis flower, pre-rolled joints "and a bunch of vape cartridge options," he said. "We will be selling a variety of gummies, we will have distillate hash and a salve."

Cannapreneurs and Town Governments Are Still Hashing Out Local Regulation
By Chelsea Edgar
Politics
Todia expects to have a crowd on opening day and has hired Chocolate Thunder Security to help it manage for the first few weeks. He's uncertain how long the store's inventory will last, but he hopes long enough for them to re-up their supplies.

"We have inventory, but we're gonna be a little hand-to-mouth," Todia said. "We're trying to have at least a week-plus of inventory before we open, based on our forecast. But who knows what actual demand will be?"

Ceres could soon have company in the Queen City, which is expected to be a popular spot for cannabis retailers. The folks at Green State Dispensary at 699 Pine Street have the OK from Burlington's local Cannabis Control Commission but are still waiting for the green light from the state.

Brooke Jenkins, the company's chief operating officer, expects the state to sign off on Wednesday, October 5, which would allow Green State to open the following Friday. The store will have cannabis flower for sale and possibly gummies and capsules.

Expect a show when this place opens. Co-owner Dave Silberman, a prominent cannabis activist and attorney, plans a ribbon cutting and has invited state lawmakers who helped pass the bill that legalized retail sales.

"I got the ceremonial giant scissors from the chamber of commerce," Silberman said with a laugh.

Related When Legal Cannabis Goes on Sale in Vermont, It Must Be in Recyclable, Nonplastic Containers

When Legal Cannabis Goes on Sale in Vermont, It Must Be in Recyclable, Nonplastic Containers
By Kevin McCallum
Environment
To start, the store will have cannabis flower and pre-rolls, Silberman said, "and within a couple of weeks, we should see edibles dribbling in."

Silberman is expecting a crowd but said he discussed a plan with the police chief and feels ready.

"I don't think we expect any trouble. But there could be lines," he said. "I hope we'll be able to move the line quickly and get people the products that they love."

After months of prep, Ana MacDuff says she and husband Josh MacDuff are ready to open their doors in Rutland. Like the other retailers, Mountain Girl expects to have mostly cannabis flower and pre-rolls to start.

MacDuff is hopeful that they have enough inventory and will keep increasing their available supply as more weed comes to market.

"We are just going to do the best we can with what we have," MacDuff said.

The grand opening is the result of "a lot of hard work, a lot of people coming together and sweating it out" she said. "But, you know, we're here, and we're very proud. And fortunate."

The Vermont Cannabis Control Board has received nearly 40 applications for retailers, so more stores will open in the coming weeks and months. The board did issue a fourth license last Wednesday. But recipient Scott Sparks says he won't be ready to open his Vermont Bud Barn in West Brattleboro until October 17 at the earliest.

"But that's a moving target," he said.

Much of his store is ready — he previously sold CBD and grow supplies there and is well-known in the industry — but Sparks still needs to get IDs and background checks squared away for staff.

A Cannabis Nurse Trains Dispensary Staff and Consumers in Cutting-Edge Weed Science
By Ken Picard
Education
He's already been in touch with growers and other producers and feels confident he'll be well-stocked with cannabis products on his opening day.

"It's been a long time coming," Sparks said. "I've worked really, really hard. And if I may say so myself, I'm proud of what I've done."

Sparks could soon have competition in Brattleboro. Theory Wellness, a dispensary brand that operates six locations in Massachusetts and Maine, is setting up shop in a strip mall on Putney Road. 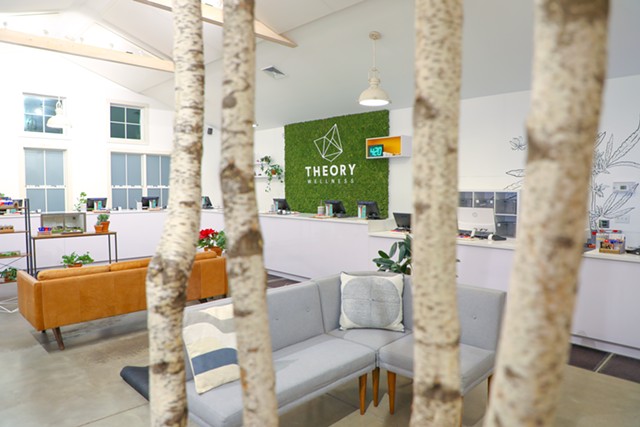 The store is still under construction, chief marketing officer Thomas Winstanley said, but the company hopes to apply for a retail license soon and open toward the end of October.

"Our intent has always been, educate the consumers on the products and make sure you're meeting their needs in terms of cannabis use with the right products so they have a good time," Winstanley said. "And they have a good first impression about what legal cannabis can be, because I think there is some skepticism, and people are just generally not sure."

Winstanley said Theory Wellness opened its first adult-use dispensary in Great Barrington, Mass., where much of the clientele came from New York State. He thinks the early days in Vermont will be similar, with big crowds.

Theory will not grow its own cannabis, according to Winstanley.

"Vermont has such a strong legacy of cultivators, and all the licenses that are currently out there really highlight the versatility and the range of cultivators," Winstanley said. "What we want to do is really focus on bringing our quality of service through retail operations; to use that as an opportunity to highlight some of these growers and cultivators who are producing some of the best cannabis on the East Coast."