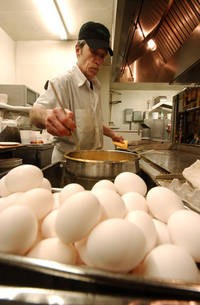 The parking lot at Berlin's Wayside Restaurant is usually jammed with cars, but it's dark and deserted at 5:15 a.m. when Randy Spaulding pulls in, parks his car and lets himself in the back door of Central Vermont's beloved, trend-resistant family restaurant. This job, which he's had off and on for almost 30 years, doesn't care how late he stayed up the night before; one hour from now, as the sun begins to rise, the first customer, ticket #1, will be waiting at the front door.

For the next hour, Spaulding will repeat a well-honed routine, timed to the minute to ensure that he'll be ready for the early-bird breakfast crowd. Disable alarm system. Hang up coat. Punch in. Put on apron. Turn on the two grills, the two deep-fat fryers, the big toaster and the oven. Today's menu features peach-topped pancakes and orange-topped French toast, so Spaulding needs to get those sauces simmering on the stove, too.

Forget one step, and he'll pay for it once the eggs start flying. "If I'm late, I really have to push it," he says, ripping open a 15-pound box of bacon and arranging the slabs on baking trays, which he slides into the oven.

He dumps a mountain of sausage links on one of the now-hot grills. They begin to hiss like baby snakes. "I'm a day person. Even on my days off I'm up early," he says, poking the loud links with a spatula.

"Home fries. Oh, yeah," he says, dumping another mountain on the other grill. Spaulding says "Oh yeah" a lot — it's a verbal tic that doubles as a motivational tool.

By 5:45, his bases are covered, except for one major setback: the racks of bacon remain uncooked because the oven never turned on. What should be browning rashers are still pink and cold. Grumbling, Spaulding dumps the bacon directly on the hot grill. Clearly this is not part of his morning routine.

Life begins on the grill, gastronomically speaking. Omelettes start out as pools of egg. Toss in a handful of ham, cheese, onions or green pepper, fold the sides in, flip it over, and the result is a work of art. "I can do five at once," Spaulding says. "I like folding my omelettes when they are still a little soft. They don't break that way."

The slight, 50-year-old egg slinger is clearly proud of his grill skill. To a short-order breakfast cook, the hot flat cooking area is both palette and operating table. Several years ago, Spaulding applied for a job as a breakfast cook at one of the major chain restaurants. He was shocked to discover "they cook their omelettes in a microwave." The interview ended abruptly soon thereafter.

Spaulding has been cooking at the Wayside since he graduated from Spaulding High School in 1976. He tried a few other occupations over the years — driving a van for a dry-cleaning company, janitorial work — but didn't care for them. His true passion, it seems, is preparing made-to-order breakfasts.

"A lot of regulars tell me that they'll only order when I'm here," he boasts. His customers have included governors, Rusty "The Logger" DeWees, the Channel 3 News team and "a guy who looked like Kenny Rogers" — but turned out not to be.

By 6 a.m. the egg station is up and ready. The waitresses have started to arrive. Eight spatulas are propped up on the grill. Spaulding is ready to do battle — but not before a cigarette break, the first of many he'll take during his eight-hour shift.

It's snowing pretty hard by 6:30 a.m., when the first order of the day comes in: poached eggs and bacon. Despite the Wayside's old-world feel, orders aren't handwritten anymore. Gone as well is the stereotypical hollering between cook and waitress. Instead, servers enter orders at computer stations, and printed tickets are spit out from a machine inside the kitchen.

Spaulding isn't nostalgic. He never liked the yelling. "It distracts me," he says as he cracks two eggs into a pan of boiling water. "Computers may have taken away some of the fun, but they also made it easier." He recalls "one waitress who couldn't adapt to computers. She still wrote out tickets."

Server Connie Haldane has been working at the Wayside for 21 years, with Spaulding for most of them. She notes that he's usually even-keeled and unflappable, as he has been so far today, but occasionally "gets excited." Her observation is more respectful razz than serious criticism. "Randy's Randy. I'll take him any day of the week."

Spaulding predicts a slow day because of the weather. Eighty percent of the restaurant's clientele are older people, and they don't like to go out in the snow, he says.

He's on to something — by 7:20 only six tickets have passed through the system. "It's slow because of the snowstorm," he suggests, flinging a plate onto the service window in a classic diner gesture. The meal slides across the metal surface, stopping just short of the opposite edge. "A couple of times I've pitched too hard, and the plate's gone over the rim."

At 8:20, the snow is really coming down. Sixty-six tickets have been processed, and it's time to cook more bacon.

"That's a Green Mountain Breakfast," he says, pointing to a plate with three eggs, a slab of juicy ham, home fries, sausage and three slices of toast. A big man's breakfast, he notes. Another "special" the Wayside rolls out occasionally is made with 10 eggs. "I don't eat too many eggs. I see too many of them," Spaulding suggests. "The other day I had an egg with no yolk. Had another one with half a chicken in it."

Customers ask for the strangest things, too. A bowl of fried tripe and a jelly omelet is one custom combo Spaulding won't soon forget.

At 9 a.m. Spaulding is already talking about getting ready for lunch. At the Wayside, the breakfast and lunch items coexist from 11 a.m. to 4 p.m., when the "dinner menu" takes over.

By 10:40, 160 tickets have passed through — still slow by Spaulding's account. "I don't like just standing around," he says as he wipes down his working area for what seems the 100th time. "We've got to switch this over to lunch by 11," he says. That's when breakfast items are maneuvered out of the way to make room for sandwich fixings. The steam table is now filled with roast pork, chicken Cordon Bleu and assorted side dishes.

Spaulding peers out into the dining room. "Okay we're going to get busy now," he announces. "John," he calls to a kitchen worker, "you want to come up and do some toast?" John does not move quickly enough for Spaulding, who is starting to get a little stressed at the pace of accumulating breakfast tickets. "John! Toast please!"

But that's not all he's worried about. "Did you put onions in the eggs?" he quizzes John impatiently. "In the eggs?" A customer apparently requested it.

John survives the grilling. Out of Spaulding's earshot, he observes, "This is nothing compared to weekends."

At 11 o'clock, Spaulding yells to the back of the kitchen. "Shane! You're doing the window today!" The worker in question functions as a kind of traffic manager, coordinating orders as they come out of the kitchen. Three cooks now work the line as the lunch crowd begins filing in. Spaulding mans the grill.

Six hours into his day, and 204 orders later, he's looking tired. He's been on his feet, moving non-stop, and hasn't once stopped to eat. "Sometimes it can be nerve-wracking because you're doing both breakfast and lunch," he says, visibly checking the clock. "Oh, yeah. Another hour and a half, and it will be all over."

"I don't stop much. That's the way I've always been. Getting tired. Oh, yeah," Spaulding says as he begins to clean one of the grills, grinding away all traces of the morning's bounty with a pumice stone.

At 1:20 his shift ends. He's processed 281 tickets, which he figures includes 240 eggs and another 30 omelettes. The lunch rush has ended, and his knee is bothering him.

"Now I'll eat," he says, and sits down to a meal that befits today's performance: Chicken Cordon Bleu.