Where Have All the Dollars Gone? A Tally of Your Taxes | Economy | Seven Days | Vermont's Independent Voice

Where Have All the Dollars Gone? A Tally of Your Taxes

Hey, Mr. Taxman: What do you say we see your receipts for once?

That’s the idea behind a project from the Massachusetts-based National Priorities Project, which scours the federal budget and estimates local contributions, and then tries to pinpoint exactly how federal tax dollars are being spent. As tax day approaches — April 17, in case you haven’t filed yours yet — it’s a subject near and dear to many taxpayers’ hearts.

NPP executive director Jo Comerford says that while Vermont is “legendary” for its town meetings and local civic engagement, it can be hard to understand just how and where the federal dollars are being spent. Vermonters paid $3.12 billion in individual taxes in 2011, according to data from the Internal Revenue Service.

So NPP uses a set of algorithms, as well as some simple long division, to estimate. For example, Vermont will contribute roughly $330.6 million in the current fiscal year to pay interest on the U.S. debt. We’ll chip in $131.4 million for unemployment insurance, and $1.4 million for the federal air marshals program.

There’s another way to look at it: Pretend you’re a single Vermonter earning about $30,000 a year. You likely chipped in an estimated $702 in 2011 for military spending, 28 cents for high-speed rail, nearly $70 for food stamps and 82 cents to fund the U.S. Postal Service.

NPP is a nonpartisan organization with progressive roots, but Comerford says the group gets accused all the time of partisan thinking.

“Just to even actually talk about the role of federal spending … can brand one as a sort of crazy liberal,” she says.

“The truth is, the majority of the government’s bills are paid by you and me,” Comerford adds. “I think if people could really understand that, and then understand that you and I reap the benefits or consequences of federal spending decisions, the hope would be that people would feel themselves emboldened to speak up.”

What we could fund in Vermont instead with our Federal taxes...

$756.7 million for the Department of Defense 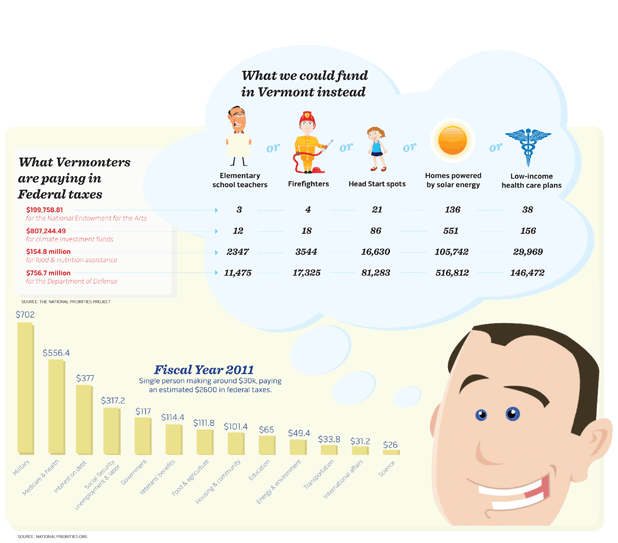