Where Does It Hurt?

A Burlington clinic takes a mind-body approach to managing pain 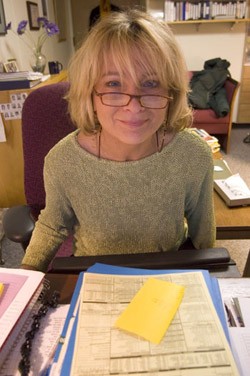 Vermont psychiatrist Magdalena Naylor says it was an "aha!" experience 10 years ago that put her on a pioneering path of pain management. Her epiphany arrived via a 1997 New York Times story on research indicating that patients who suffered from depression were more likely to develop cardiovascular disease. For Naylor, 56, the study offered crowning proof that "the mind and body are one, and that we can use the mind to treat the physical symptoms of the body."

This research was particularly intriguing to Naylor, who is originally from Poland, because she holds a doctorate in cardiovascular physiology from Warsaw Medical Academy. She came to the United States in 1981 to continue her studies, arriving three months before the communist authorities declared martial law. Naylor decided to stay in the U.S. and pursue a psychiatry degree at Duke University. There she met her mate, Thomas Naylor, an economics professor who, post-retirement, would become a leader of the Vermont secessionist movement.

The couple and their young son Alexander moved to Charlotte in 1993 because, as Magdalena Naylor explains in her melodious Polish accent, "I wanted to live a normal life and be a mother." She also got a teaching job at the University of Vermont's College of Medicine. And it was there, inspired by the Times story, that she founded the MindBody Medicine Clinic.

A spry woman with frosty blond hair, Naylor explains the clinic's mission during an interview in her sixth-floor office at University Health Center. Among the perks of her post is a stunning view of Lake Champlain and downtown Burlington.

Through its cognitive-behavioral therapy sessions, Naylor says, the clinic has helped scores of patients cope effectively with chronic pain and thereby improve their relationships, job performance and self-image.

Naylor's methods have been shown to ease acute suffering that has persisted for 20 years or longer. Still, she says she tells the tormented, "I'm not a magician who will take your pain away." She does promise, though, that by following her clinic's regimen, individuals beset with migraines, back aches and musculoskeletal disorders such as arthritis can learn how to make chronic pain a less dominant feature of their daily lives.

Naylor's "interdisciplinary treatment" involves meditation techniques, strengthening exercises, nutrition counseling and instruction in communication skills. Some physicians are skeptical about this nontraditional approach, she acknowledges. But more of them are coming to recognize the limitations of surgery and medication, and to affirm the benefits of tapping the mind's ability to alleviate the body's distress. "We get lots of referrals from the hospital," Naylor says, referring to Fletcher Allen Health Care. "We don't have to advertise."

Among the clinic's supporters is the National Institutes of Health, a federal entity not noted for underwriting dubious medical practices. In addition to providing a 5-year operating grant, the NIH is reviewing Naylor's funding request for research that would use magnetic resonance imaging (MRI) to determine whether her pain-relief procedures effect changes in patients' brain chemistry. Naylor says her own MRI research has already revealed that the brains of those suffering from chronic pain react differently to fear than do pain-free individuals.

Such studies may deepen understanding of the mind's mysterious workings. Researchers have been examining the relationship between thinking and suffering for at least the past 60 years. Early inklings emerged in the years after World War II, when Harvard anesthesiologist Dr. Henry Beecher observed that soldiers wounded in the battle of Anzio in Italy experienced far less pain than did civilians in Boston who had undergone surgery. He suggested that the GIs' joy in surviving and their anticipation of returning home accounted for the difference. These findings led Beecher to conclude that pain is "complex, subjective and different for each individual."

Naylor likewise tailors her therapy to specific ailments. The first step in her 12-week program is a two-hour evaluation of the prospective patient's problems. Her work has convinced her that 17th-century French philosopher René Descartes was wrong when he theorized influentially that the mind and body are two separate mechanisms. "Western medicine was equally wrong," Naylor adds, "in discounting the significance of patients' mental states for their physical condition."

Some Vermonters who may not know much about Descartes' dualism do know that the MindBody Medicine Clinic has had a huge positive impact on their lives.

Chronic pain can have severe social consequences, Naylor notes. Kathryn Gross, director of a childcare center in Essex Junction, agrees. Gross recalls that damage done to her sciatic nerve by a misdirected injection in 1987 caused her such agony that she nearly lost her home and job. When she took part in the clinic's 90-minute group-therapy sessions, Gross found "a door had opened." While the burning sensation in her legs persists, the pain-management methodology Naylor taught her "has become a way of life for me," Gross says. "It saved my house and brought my business back around."

Adjustments to a patient's previously prescribed medications can be part of Naylor's pain-relief repertoire. In some cases, however, her therapy helps put an end to drug dependency. Gross, for example, was motivated to try to do without "the very large doses of narcotics" doctors had administered for years to numb her, she says. "I went 10 days and nights without sleeping," Gross recalls of her cold-turkey experience. "I walked into walls." And she managed to stop taking pain medication entirely.

Gross was also able to cut her weight in half - returning it to the pre-injury level. Extreme weight gain is a common symptom among those suffering chronic pain, Naylor points out.

Towanda Geary, a former nurse at the Northwestern Medical Center in St. Albans, has also benefited from Naylor's instruction on harnessing the power of the mind. Geary now only occasionally uses muscle relaxants to soothe spasms in her neck, shoulders and arms. Relaxation techniques learned at the clinic "have enabled me to change my thoughts and reduce the pain," she says.

Geary was injured three and a half years ago when a 550-pound patient at the Medical Center pulled on her arm as she and five other nurses tried to lift the woman out of bed. "Very intense pain" forced Geary to abandon her nursing career; now she's about to enroll in a clinical psychology course at the Community College of Vermont.

Affirming Naylor's view that physical suffering can cause great emotional and psychological distress, Geary observes, "People in pain have a tendency to recoil. They don't socialize as much." Pain harmed her family life as well, she adds, noting that it was hard to play with her 5-year-old son.

In addition to positive lessons, the clinic's 10-member therapy group offered negative examples Geary found valuable. "It's fascinating to see how different people react to pain," she says. "You can see in the groups how you don't want to be."

Not all patients referred to Naylor approach the breakthroughs achieved by patients such as Geary and Gross. "Everybody is able to benefit" from the clinic's program, Naylor says, "but some people aren't ready. They're too angry or frustrated. They may say, 'I don't know why I'm here, because the pain is not in my head.' Of course it's not."

Some patients also need help overcoming what Naylor terms "maladaptive skills" they developed to counteract their pain. They may engage in "catastrophizing," she says, by insisting to themselves they'll never be the way they were before. And that is so, the doctor concedes, adding that patients with chronic pain must learn to grieve for what they've lost.

Naylor gains legitimacy in the eyes of many patients when she tells them she herself suffers from chronic lower-back pain as a result of a car accident four years ago. She says she applies her own pain-reduction techniques but still has to sleep with a heating pad on the sore spot.

Even as she proselytizes for the power of mind over matter, Naylor concedes there are circumstances where her approach isn't appropriate. The clinic usually doesn't treat cancer patients, for example. The pain of that disease often cannot be mitigated by her therapies, Naylor acknowledges.

Naylor says she doesn't "want to sound like Dr. Bernie Siegel," the best-selling author of Love, Medicine and Miracles. His "positive attitude approach" to fighting cancer "made patients feel guilty when they did not improve," she explains. "There is no proof that simply changing the attitude changes the disease."

Naylor's current focus is preventing relapses. She's found that gains made in group therapy typically begin to wane six to eight months after the sessions conclude. So she has devised a "therapeutic interactive voice response" system whereby patients receive recorded advice on honing their coping skills.

Geary says she still uses a "key word" that Naylor taught her to repeat to herself when her pain threatens to become unmanageable. "I can lessen it just by telling myself, 'Relax,'" she says. "It's such a simple thing, but it really does work."