When the Pandemic Came, Heart n Soul Stepped Up and Served 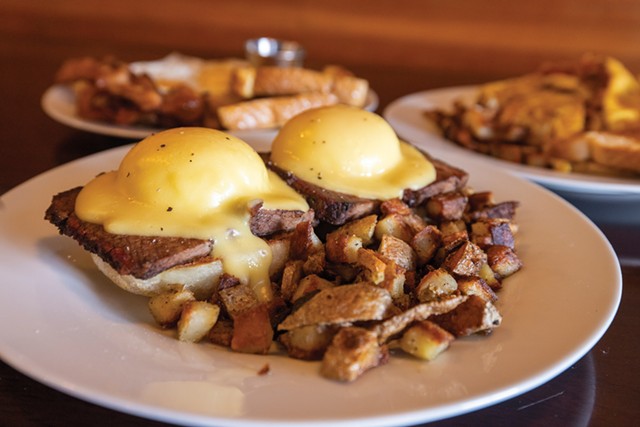 Those hearty meals would come "with a chef's touch," said Langworthy, 42, a military veteran and culinary school graduate who also owns Mark BBQ, next door to Heart n Soul in Essex Junction.

The name of the new restaurant turned out to fit its character as much as its menu. In March 2020, three months after Langworthy opened Heart n Soul and just as the restaurant was gaining customer traction, the pandemic caused lockdowns across the country. He closed its doors and put his own money into the business account to pay his 10 workers for three months.

Rather than let the food in Heart n Soul's freezers spoil, Langworthy called in staff to cook meals and hand them out to Vermonters in need. They kept doing it, every Wednesday, as the pandemic wore on. In 2020, Heart n Soul gave out 57,000 meals, all free. At one point, 1,000 meals went out the door in a week.

"We gotta take care of our community. They're who takes care of us." Darrell Langworthy tweet this

Giving back to the community is "at the core of who we are in this restaurant," Langworthy said. "That's been helping us stay alive through all of this. Honestly, I think that's the biggest, most important thing that we can do."

Soon after the free meals started, "a miracle happened," Langworthy said, his blue eyes tearing up.

Mark BBQ continued operating for takeout, and orders flooded in. Customers flocked to support the local business, including Essex neighbors who had never tried the restaurant before. The surge — sales doubled overnight — was overwhelming, Langworthy said.

"We were doing a minimum of 100 meals an hour or more," said Casey DeGuise, general manager of both restaurants.

It helped that To Go Tour, a Facebook group founded at that time to support Vermont's bars and restaurants, featured Mark BBQ as one of its first stops, Langworthy said.

"That money was helping to fund what we were doing over here," he said of the free meals at Heart n Soul. "We were doing so much business."

Langworthy's wife, a pharmacist at the University of Vermont Medical Center, made sure that customers stood safely apart in a line that snaked around the building. Through most of April and May 2020, Mark BBQ sold out of food by early afternoon — some days as early as 9:30 a.m. with preorders alone. The business has barely slowed down since then. Mark BBQ reopened for indoor dining in July 2020.

Heart n Soul reopened for indoor dining in August 2021 and added breakfast later last year; it's currently open Thursday through Saturday from 7:30 a.m. to 9 p.m., and Sunday for brunch, from 7:30 a.m. to 1 p.m.

The restaurant still makes free meals for the community as part of Vermont Everyone Eats, a federally funded initiative to combat COVID-19-related food insecurity while supporting the restaurants that provide meals. (Read more about anti-hunger efforts in this week's cover story.)

"We gotta take care of our community," Langworthy said. "They're who takes care of us."

Langworthy's investment in good karma predates the pandemic. In February 2018, soon after Mark BBQ moved into its current location on Park Street and began hiring new staff, DeGuise showed up for an interview soaking wet in a dress shirt.

DeGuise had recently been released from jail and into rehabilitation on charges related to serious substance-use disorder. In recovery, he was living in Vermont Foundation of Recovery transitional housing and needed a job to pay his rent there, but he had no vehicle. He recalled walking to Mark BBQ in freezing rain after striking out in 35 other job interviews that month.

Langworthy said he admired DeGuise's raw honesty about his situation and gave him a shot. "I always trust my gut, and it doesn't fail me," he said.

In two years, DeGuise worked his way up from the counter to meat preparation to his current general manager position. He recently bought a 2021 Jeep Gladiator (Langworthy gave him a bonus for the down payment) and has regained shared custody of his 12-year-old daughter, he said.

Every year, Langworthy recognizes the anniversary of DeGuise's sobriety in a social media post. "All I did was give him the opportunity," said Langworthy, who has hired other workers in recovery. "Everything else has been him."

Langworthy, who said he has never struggled with addiction himself, draws his compassion from his upbringing. His grandfather, who owned a gas station, allowed customers who were tight on money to run a tab with nothing more than a handshake and trust that they eventually would pay, he said. "I just feel like we need more of that."

Born in the tiny Adirondack town of Warrensburg, N.Y., and raised mostly in West Palm Beach, Fla., Langworthy began working in restaurants at age 13, he said. By 17, he was occasionally running the cooking line at Giuseppe's Pizzeria & Café, an Italian institution in Lake George, N.Y., where the owners treated him like family during his return visits north.

"I treat my employees like they treated me," he said of his mentors there.

Langworthy graduated from the University of Florida with a nursing degree and joined the Army in 2001. He completed service tours in Iraq and Afghanistan as a medic and behavioral health specialist. While stationed in Texas, he learned the "art of barbecue" from his father-in-law, Mark Ivey, a Texan who would spend weekends sampling the meats at different joints.

In 2004, when he was off active duty, Langworthy enrolled in culinary school at Adirondack Community College (now SUNY Adirondack). He also worked as an assistant saucier at the renowned Sagamore Resort in Bolton Landing, N.Y.

Then the Air National Guard recruited him back into service. He was stationed initially in Florida, but in 2006, he moved to the base in Vermont, where he and his wife wanted to raise their kids, he said.

In early 2018, a friend of Langworthy's, who owned the Smokin' Butt's Bar-B-Q food truck in St. Albans, decided to get out of the business. Langworthy took over the truck and named it Mark BBQ, after his father-in-law. He parked it in front of the predecessor to Firebird Café at Five Corners in Essex Junction.

By summer, Mark BBQ had so much business from catering gigs alone that Langworthy knew he'd need a permanent space. He found one on Park Street in October 2018.

Within four months, the restaurant was churning out 2,000 to 3,000 pounds of meat on a Saturday night, DeGuise said. Its success gave Langworthy the confidence and the cash to open Heart n Soul.

Mark BBQ provides the foundation for Heart n Soul in other ways, too. Many of the newer restaurant's dishes start with the barbecue's smoked meats. For the burgers ($8 and up), Langworthy uses Mark BBQ's brisket, seasoned with a rub and ground to spread the seasonings.

"It's so flavorful," he said. "I always tell people that my trick to a burger is [to] treat it like meatloaf."

Burnt Ends BBQ Poutine ($10), incorporating the charred edges of the barbecue brisket, is a Heart n Soul favorite. The Southern fried chicken ($15) is smoked at the barbecue, then soaked in buttermilk and tossed in Heart n Soul's own seasoned coating. "I wanted fried chicken how it is in the South, and not KFC," Langworthy said.

Thick, juicy slices of house-smoked turkey dominate the Gobbler sandwich ($11). Stacked on toasted sourdough, they're topped with cheddar cheese, bacon and sun-dried tomato pesto aioli. In the one I tried, the pesto was a little on the light side, barely discernible, but the flavorful turkey was good enough on its own.

My husband declared his Reuben ($11), with slow-smoked housemade pastrami, a top-notch rendition of the classic sandwich tweaked with a hint of sweetness to the meat.

In addition to his two restaurants, Langworthy owns three food trucks: Mark BBQ and two slated to open this year — BBQ Tacos and Skreet Doggs. He said he'd like to open a second Mark BBQ in St. Albans and ultimately own at least eight restaurants.

"To me, eight restaurants isn't just for money," Langworthy said. "It's eight opportunities for other employees to get a great job, to work for a boss who's a fairly nice guy most of the time, in a family environment more so than anything."

The original print version of this article was headlined "Bighearted"