When the Chef Doesn't Cook: A Conversation With Hen of the Wood's Eric Warnstedt 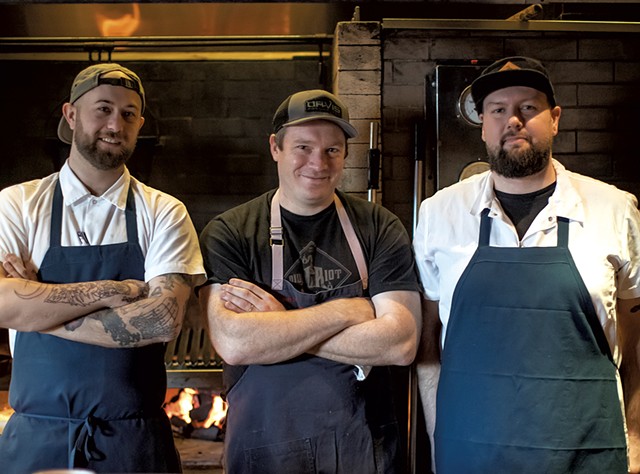 A handful of Vermont restaurants draw their identities from their chef-founders, including American Flatbread in Waitsfield (George Schenk), Café Provence in Brandon (Robert Barral) and, recently, Honey Road in Burlington (Cara Chigazola Tobin).

Perhaps nowhere is the association between chef and restaurant stronger than at Hen of the Wood, founded by Eric Warnstedt in 2005 in a historic grist mill in Waterbury. In Vermont and beyond, Warnstedt's name is synonymous with seasonal, uncomplicated cooking — "simple yet technique-driven," to use his words — that highlights regional ingredients.

Yet Warnstedt hasn't made an order of hen-of-the-woods mushroom toast — or anything else on the menu — in more than six years, he said. Though he still cooks for special events hosted by his restaurants, the day-to-day duties belong to chefs Jordan Ware at Hen of the Wood in Burlington and Antonio Rentas at Hen of the Wood in Waterbury. It's an example of how founding chefs come to delegate as their restaurant groups grow — and Warnstedt says it's working out well.

When Warnstedt, 44, and his business partner, Will McNeil, opened Hen-Burlington in the fall of 2013, Warnstedt worked as an expediter for six weeks as the new restaurant established its groove. (The expediter coordinates between the kitchen and the dining room and has the last look at and touch on a plate before it leaves the kitchen.)

But the only cooking he's done at Hen-Burlington was for photo shoots, he said.

"It was hard to give up control [but] ... it's been a great thing." Eric Warnstedt tweet this

The kitchen there and in Waterbury continues to turn out hen-of-the-woods mushroom toast. The signature dish of a poached egg atop grilled bread, sautéed mushrooms and house-cured bacon is lovely and down-to-earth.

It's that earthy smell of foraged mushrooms that Warnstedt misses.

Warnstedt was sitting at a table at Hen-Burlington, wearing a black Hen sweatshirt and joined by his chefs, Ware and Rentas. They are key players in the team of 170 people who work at the four restaurants Warnstedt and McNeil own: two Hen of the Woods, Doc Ponds in Stowe and Prohibition Pig in Waterbury.

"The food at Hen of the Wood does not need my approval," Warnstedt said. "Whatever the menu says tonight belongs to Jordan and Antonio." 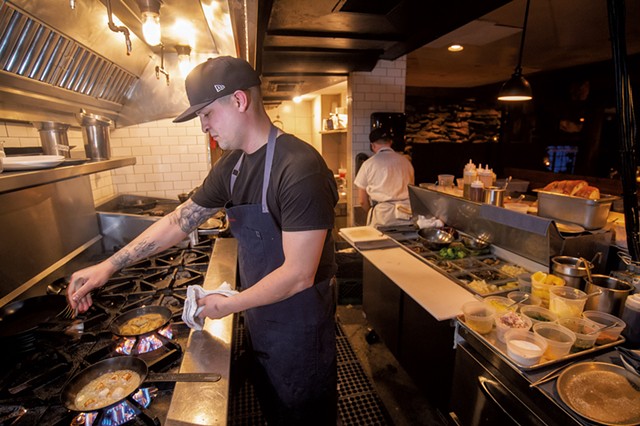 In charge of kitchen operations at their respective restaurants, Ware and Rentas order food, work with farmers and other local producers, plan menus, manage the kitchen team, ensure that the poached egg will drip, and make a final pass on each plate before saying, just loudly enough, "Runner, please." This signals to servers that the plate is ready for delivery.

"It was hard to give up control, [but] it's part of the whole game ... and it's been a great thing," Warnstedt said. "There's no reason for me to have my thumb on it. You hire people to do a job."

In addition to his business' expansion, personal reasons pushed Warnstedt to relinquish his position. He's had sole custody of his daughter, Ella, now 12, for four and a half years, Warnstedt said. He ends his workday by 5 or 6 p.m. to be with her.

Warnstedt left behind a job that he described as having a certain "romanticism" and also called "fucking brutal."

On a recent Saturday night, Hen-Burlington served about 300 people, Ware said. In the first five minutes of business, the kitchen had orders for 20 dozen oysters from diners who lined up before the restaurant opened at 4 p.m. In total, the staff shucked and served about 700 oysters that night, according to Ware, who ordered 2,500 oysters last Thursday to get through the weekend.

In Waterbury a week ago, Rentas and his team served a perfectly crafted small plate: housemade cappelletti stuffed with braised short rib in a sauce composed of the rib's braising liquid, pasta water, butter, sherry vinegar and a little roasted sweet potato purée.

The overarching achievement of both chefs is giving diners the kind of experience they've come to expect at Hen of the Wood.

"This kind of food, and this kind of cooking, is just right," Ware said. "It's simple. It's Vermont. It's about relationships with farmers and community ... When I started at Hen of the Wood, the way Eric cooked and looked at things changed everything for me as a chef."

Ware, 37, grew up in North Bennington and attended the Culinary Institute of America in Hyde Park, N.Y. His first cooking job in Burlington was at Smokejacks, a restaurant that occupied the current site of Honey Road from 1997 to 2008. Warnstedt was chef there for a time; Ware was a line cook and brunch cook.

Warnstedt left Smokejacks in 2005 to open Hen-Waterbury. Ware had a few different restaurant jobs (including working for a year in Bozeman, Mont.) before he walked into the Waterbury restaurant one day in 2008.

"Eric needed a dishwasher," Ware recalled. "And I washed dishes." 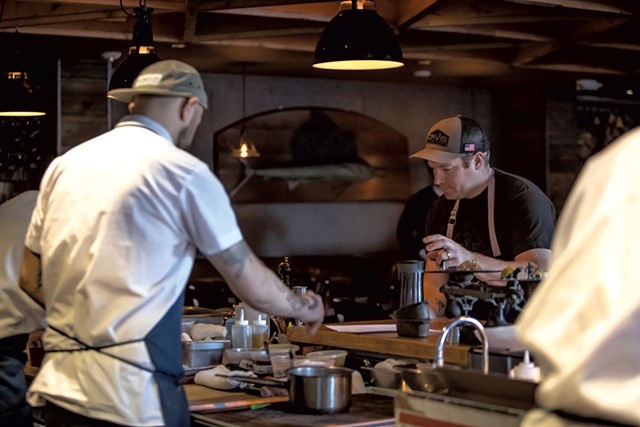 After a couple of dishwashing shifts, he was hired as a prep cook before moving on to making the desserts and salads — and ultimately becoming sous chef. After two years, Ware left Hen-Waterbury to become chef at the Farmhouse Tap & Grill in Burlington. When Warnstedt and McNeil opened Hen-Burlington, they offered Ware the chef position at the restaurant, which has 100 seats, including the lounge and bar area.

"Hen of the Wood for me always clicked," Ware said, adding that it was a "no-brainer" to accept the job. He now manages a team of 17 cooks and dishwashers, including sous chefs Micah Tavelli and Nick Frank.

Ware recognizes the importance of giving the cooks who work with him a "voice," he said. That means ensuring his sous chefs have the opportunity to come up with dishes. It also means working with appetizer cooks until they're ready to "go live" on the line, a high-pressure, high-visibility position in the open kitchen.

Ware expedites four nights a week and works one day in the office. He said he sometimes spends "all day talking, looking for answers."

Warnstedt remains a "sounding board" for him, Ware said. "We've gotten better at keeping people happy, making sure people have what they want," he said.

Rentas, 31, was born in the Bronx and raised in Yonkers, N.Y., before he moved with his family to Plattsburgh, N.Y., for high school. He discovered Hen of the Wood as a diner in the spring of 2014. A new graduate of New England Culinary Institute in Montpelier, Rentas was about to move to New York City to work at a Daniel Boulud restaurant when he had a meal at Hen of the Wood.

Rentas and his girlfriend sat at the kitchen counter by the "pass" where Ware works. Like many diners who score a seat there, Rentas took in the scene of Ware and his crew on the job. "Everyone was awesome," he said. 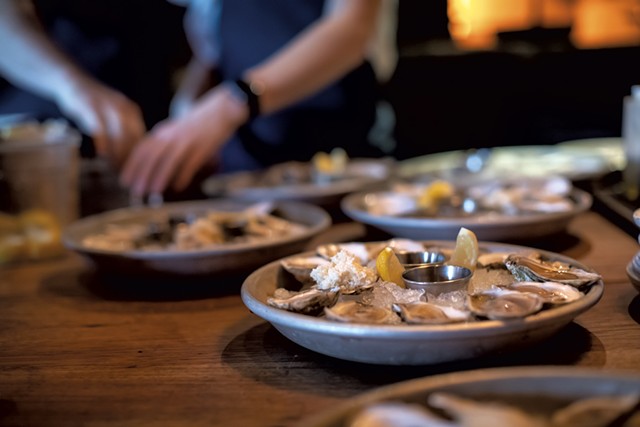 He ate Parker House rolls and cultured butter, fresh mozzarella and braised ham. He drank a beer. "We crushed that night," he said of the dining experience. "We had fun."

Rentas talked a bit with Ware, who showed him the kitchen and gave Rentas his card. "It sounds like you've got a good thing going," Ware told him. "But if you're around [here] again, call me."

A year later, when Rentas decided to leave NYC, he reached out to Ware. They arranged that he'd come to Burlington for a one-night "stage" at Hen of the Wood, an opportunity for him and the restaurant to feel each other out. Rentas shucked oysters and made asparagus salad — and sensed that it could be the right place for him.

"The communication seemed really solid," he said. "All the plates came out clean; the food was really good."

A few weeks later, in the spring of 2015, Rentas moved back to Vermont and started cooking at Hen-Waterbury. The 45-seat restaurant, whose interior stone walls are lit by candles in the crevices, stands on the edge of Graves Brook.

"I walked down the stairs in Waterbury; it was like, 'Whoa!'" Rentas recalled. "It was everything I was looking for." He became chef three years ago.

Warnstedt, meanwhile, works in an office above Prohibition Pig. He goes to meetings, communicates with managers — there are 31 at the four restaurants — and spends his day "doing a million back-end things to keep the machine moving forward."

He and McNeil are looking at three possible new projects, Warnstedt said, "hoping something clicks."

"Our big goal, our experiment, is to see if our company culture can scale," he said. "The energy that I had cooking, that kind of feeling of being creative and free — all that goes into planning for the future."