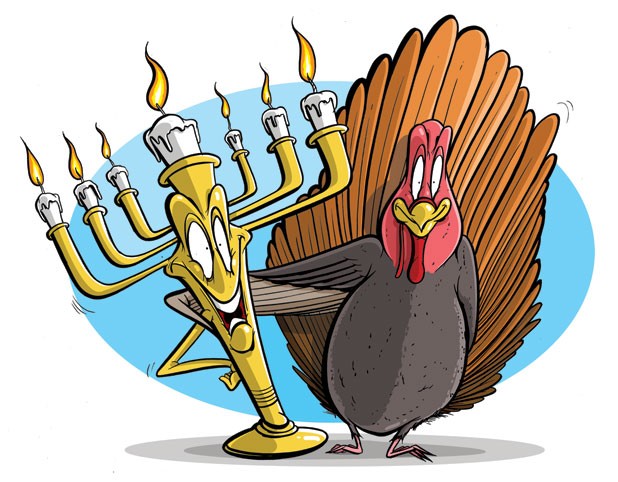 Hanukkah may be the most anticlimactic of holidays, and never more so than this year. While the Fourth of July, Christmas and New Year’s reliably arrive on the same date each year, Hanukkah, which follows the lunisolar Hebrew calendar, is like the drunk brother-in-law of Jewish holidays. Once a year, it shows up unexpectedly, hangs around for more than a week, and leaves my checking account depleted and the living room littered with tissue paper and empty cardboard boxes.

For the uninformed, Hanukkah, or Hanukah, or Chanukah — the holiday has more accepted spellings than “Muammar Gaddafi” — is the Jewish Festival of Lights. A relatively minor holiday on the Hebrew calendar, its status was greatly inflated by its proximity to a major celebrity’s birthday.

Hanukkah celebrates the ancient Hebrews’ military victory over the Greeks to reclaim and resanctify the holy temple in Jerusalem. The Hanukkah “miracle,” as the story goes, is that a single night’s supply of lamp oil burned brightly for eight nights, thereby cementing another timeless Jewish tradition: boasting about what a great bargain we scored.

For secular Jews such as myself, the true miracle of Hanukkah is frying latkes, or potato pancakes, without setting off the smoke alarm.

When I was a kid, those of us who played on the blue and white team (i.e., the Jews) would brag to our red and green brethren (the Christians) that, unlike them with their one-day holiday, we could enjoy eight nights of wrapping-paper-tearing ecstasy.

Of course, ours was an empty boast. Most years, Hanukkah week started out strong, as we landed A-list presents such as the 250-piece LEGO set, or the G.I. Joe amphibious assault vehicle with dual airbags, on a single night. But as the week wore on, the presents became more utilitarian: socks, sweaters, gloves, underwear, more socks. By the eighth night, even the most gifted of thespians among us couldn’t feign exuberance over a new shoehorn or a $10 gift card from Radio Shack.

In many traditional Jewish homes, kids play a gambling game with a dreidel, a four-sided spinning top with Hebrew letters etched into each side. There are even fake gold coins, called Hanukkah gelt, to enhance the faux-Vegas effect; they come in small satchels made from the same mesh material used in deep-sea driftnets. The foil-wrapped chocolate coins are sort of the Jewish equivalent of Mardi Gras beads, baubles given out to those too young or naïve to realize they’re not actually worth anything.

Legend has it that the custom of playing with the dreidel arose during Greek rule of ancient Jerusalem. The Jews, who were forbidden from studying Torah, or holy scriptures, would pretend to play with a dreidel whenever a Greek soldier walked by. For me, that story never quite rang true. It would be like pretending to shoot craps while surreptitiously doing my algebra homework. As for making a dreidel out of clay, as the classic Hanukkah children’s song suggests, I’m pretty sure mine was made out of petroleum products in a factory in China.

Don’t get me wrong. I’m not down on Hanukkah, even when it tests my already-challenged math skills to figure out how many candles I’ll need for the remainder of the week. According to tradition, Jews are supposed to light one new candle per night. Thus, the menorah, or nine-branched Jewish candelabra, bears two candles on the first night, three candles on the second night, four on the third, and so on, until nine candles are burning on the eighth and final night.

Why nine and not eight? The ninth candle, called the shamash (literally “attendant”) candle, is used each night to light the others and stands higher than the rest, like the ref at Wimbleton. Hence a standard box of Hanukkah candles comes with the requisite 44.

Of course, those of us who, say, sometimes forget to light the candles — and then use the leftovers for kids’ birthday cakes throughout the year — tend to accumulate half-used boxes of Hanukkah candles. At our house, they’re stored in the cupboard next to the half-eaten boxes of Passover matzoh likely dating to Bill Clinton’s first term. I keep old matzoh in case my family ever has to shelter in place — because, after all, can anyone really tell when matzoh goes stale?

This year, celebrating Hanukkah in November — or “Thanksgivikkah,” as the media dubbed it — seemed even more out of sync with the season, and not just because Black Friday fell on night three. There’s just something wrong about having to turn down the volume on the Raiders-Cowboys game to sing the Hanukkah prayers.

What’s worse, the Jewish Festival of Lights was exiled entirely from December, that darkest month of the year when it’s still socially acceptable to eat and drink too much and lounge around the house in gravy-stained sweatpants.

Wait, that sounds like Thanksgiving. This year, we’ve had leftover sandwiches with turkey and pot roast, and the last serving of stuffing survived eight nights.

The original print version of this article was headlined "Oy, Hanukkah"