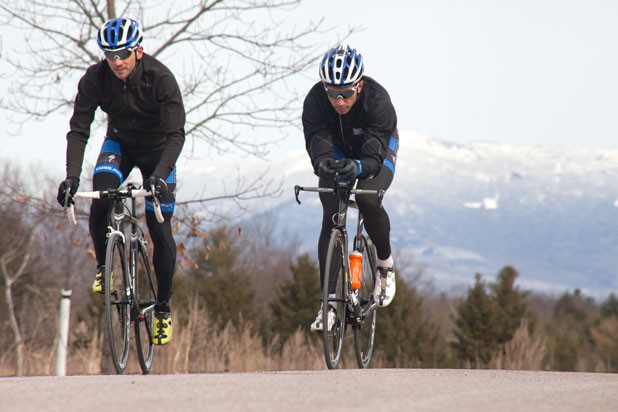 A few minutes before Bobby Bailey and I are scheduled to meet at the Starbucks in Williston one recent afternoon, he sends me a text saying how to recognize him: “Only one that ummmmm, hopefully looks like a cyclist. No spandex, though.”

Indeed, Bailey’s snappy shirt and sport coat say “Burlington businessman” way more than “sweat-stained athlete.” But, hey, it’s winter. And what Bailey is about to unveil to me sounds a lot more like a smart business plan than a simple workout.

We’re here to talk about the brand-new Dealer.com-EverBank Cycling Team, a program that matches 10 of Vermont’s fastest men and women (well, woman; more on that later) and three junior cyclists with two Green Mountain business giants. The idea is to pave the way for not only the participating athletes’ success but also greater brand awareness for the sponsoring companies.

In cycling, which tends to be perceived as an individual sport, it may seem superfluous to create a team. But, as Bailey explains, gathering top cyclists allows them to train together and support each other at races. And when it comes to soliciting sponsors, it makes more sense to have, say, 12 riders wearing a company’s logo than just one. Across the country, elite cycling teams operate on this model. Vermont hasn’t fielded such a high-caliber squad of competitive riders — until now. Bailey hand-picks the cyclists and coaches them in Chittenden County; title sponsors Dealer.com and the Stowe-based EverBank kick in thousands of dollars to help the team enter and travel to races.

“When you sponsor a cycling team,” Bailey explains, “you’re getting a 10- to 15-person marketing team that works from March until December.”

While Vermont has long been known for its biking scenery, the state’s competitive bikers used to ride under the radar when it came to elite-level races.

“If you had asked me 18 years ago if there could be a Vermont-based [bike-racing] team, I would have laughed,” says Bailey, who moved here in 1995 to study at St. Michael’s College and stayed. “But now, I see these businesses that are here because of the quality of life.” Why not, asks Bailey, enhance awareness of the state by fielding a Vermont team with Vermont sponsors?

Bailey was a top amateur cyclist in the early 2000s and founded 1K2GO Sports, a sports-management company, as a way to train and race with fellow riders and eventually to coach up-and-coming cyclists. (The name refers to the final kilometer of a race — the last chance for a surge toward the finish.)

At first, he saw little infrastructure in Vermont to support such a team. Riders trained here, but they would often move to another state to join a team with more opportunities. Now Bailey sees a chance to change all that.

“Vermont’s not just this little tiny corner of the world anymore — we can facilitate a professional team,” he says. “We’ve always had really great athletes, and now we have great businesses with local roots, national connections and international ambitions.”

In January, Bailey announced the new partnership that is the 2013 Dealer.com-EverBank Cycling Team — 10 of the state’s top riders training and racing together, representing Vermont in some of the world’s most competitive events. Additional sponsors include Vermont Nut Free Chocolates, Onion River Sports and Cabot Creamery, which have joined the title sponsors in their mission to support local riders and build their brands.

“We take up a lot of real estate and employ a lot of people, so it’s important for us to promote a healthy lifestyle,” says Dealer.com marketing vice president Steve Francisco, explaining his company’s decision to buy into the new team. The prospects of developing junior riders and promoting health and fitness among kids were appealing, too. So was the chance to actually ride for the team — Francisco is one of the elite cyclists on the new squad.

But Dealer.com’s support has a deeper level. “It’s a marketing initiative,” Francisco says. That means getting the company’s name out there, not only for sales but also for recruiting purposes here in Vermont and at its offices in Manhattan Beach, Calif. “We’re trying to hire more computer engineers, and Silicon Valley has a number of cyclists who are also computer-science professionals,” explains Francisco. He adds that if a potential recruit sees a Dealer.com logo on a bike jersey in a race, that might flip the switch.

“We’re a very valuable marketing asset to a company,” Bailey says. While he can’t always guarantee a return on investment, he assures potential sponsors that sponsoring a team costs less than running a TV commercial or placing a magazine ad.

What about the hit that cycling’s reputation took with the Lance Armstrong saga?

“Yeah, there’s a negative cloud over the sport,” Bailey admits. “But people are still riding their bikes. It hasn’t negatively impacted our sponsorship.”

In fact, the public attention focused on doping gives programs such as the Dealer.com-EverBank Cycling Team a chance to affect young riders positively. Because cycling has become a game of marginal gains in which the best technology is available to everybody (at a price), riders have to find their advantages, Bailey says. For some, that may mean turning to banned substances. “But for us, it’s coaching or nutritional counseling,” he says. “We have junior cyclists that we are trying to promote and raise through the sport the right way, through hard work and nutrition and starting them young.”

The youngest rider on the Dealer.com-EverBank junior development team is 14; the elite roster also includes professionally ranked Adam Carr and veteran Jake Hollenbach. Bailey, who has a full-time job as a K9 handler with the University of Vermont police department, typically finds members of his all-Vermont team through word of mouth and at events.

The team currently has just one woman — South Burlington’s Amy Miner — and that means there may be room for other female athletes looking for team support. “I see a lot of women doing triathlons and running,” says Bailey. “But I don’t know the answer to how we get more women interested in competitive cycling in Vermont at the elite level.”

The answer may lie in the road ahead, as the newly formed team sports its new blue and black jerseys in regional, national and international races. Bailey says the team is transitioning from indoor training to outdoor rides in preparation for races in New York, South America, even Vietnam. Back in Vermont, they’ll also hit the three big ones — Bennington’s Tour of the Dragons, the Killington Stage Race and the Green Mountain Stage Race. Purses range from $2000 to $20,000.

“I’m not going to say anybody’s getting rich doing these races, but if we do well, we can at least cover the team’s cost,” says Bailey, who sees even bigger business coming from elevating Vermont’s profile in the competitive cycling world. “If we can accomplish putting together a pro team, and you have full-time athletes representing Vermont and Vermont sponsors, it would really be wonderful to place us on the map,” he says. “I wouldn’t be doing this if it wasn’t possible — and probable.”