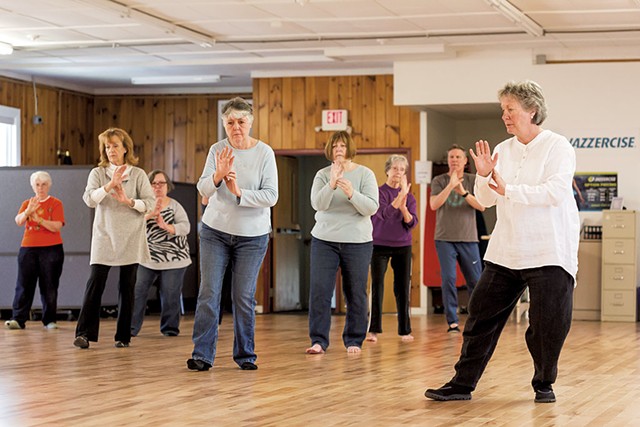 For decades, Burlington's two senior centers have supplied $3 lunches, social activities and other services for older residents who might not otherwise venture from their homes. Yet as the city's senior population grows, fewer people are taking advantage of those offerings. Financial pressures are making it harder for the centers to serve those who do show up.

In the Old North End, the Champlain Senior Center is in such dire straits that the city is considering stepping in.

"If there are 12,000 seniors in this city and we're not reaching them — not even close — then what are we doing wrong?" said City Councilor Dave Hartnett, who represents Wards 4 and 7 and sits on the board of the Heineberg Senior Center in the New North End.

Behind the scenes, city officials and advocates for the elderly are trying to answer that question. To formalize the effort, Hartnett and fellow New North End councilor Kurt Wright plan to ask the city council to create a committee to study the city's senior centers. The goal, as Hartnett put it: "Get the movers and shakers to try to figure this out before it gets worse."

Sometimes dismissed as stodgy establishments where the elderly congregate to play bingo, senior centers are, in fact, a critical resource, says Dave Reville, associate state director of AARP Vermont. "We're an old state and getting older, and the senior centers and the services they provide are ... key to successful aging, in our view."

They provide affordable meals to people who need the nutrition. "It's a very valuable service," said 74-year old Lorrie Colburn, who dines at the Champlain Senior Center several times a month. "I don't want to cook anymore," she said, noting that at Champlain, she eats vegetables that "I wouldn't otherwise bother to have at lunch."

Senior centers also offer exercise classes, health services such as flu shots and foot care, writing seminars, and other activities. Even bingo has its benefits — studies have shown that social interaction can reduce depression and cognitive decline among seniors.

The number of Chittenden County residents who are 85 and older will double by 2030. Reville makes the case that "we need more places for people to congregate and socialize and benefit from resources, rather than less."

So why is Burlington is struggling to maintain its two centers? Champlain and Heineberg are separate nonprofits, and although they face some of the same challenges, the situation at each is distinct.

At Champlain, the most pressing issue is money. Executive director Bonnie Campono, one of the two part-time employees who run the center, said they have been trying to make do with a budget that's shrunk by more than 25 percent, from $174,000 in 2013 to $127,000 this year.

While the city continues to contribute about $40,000 each year, and United Way of Northwest Vermont chips in $17,500, the center has lost other grant money, said board member Sarah Carpenter. Making matters worse: The center's home, the McClure Multigenerational Center, is in need of costly repairs.

The shortage of money means the center can only afford to stay open four hours a day.

The main event is lunch, which is served every weekday with food supplied by the Champlain Valley Agency on Aging. Providing this meal is especially important in the Old North End, which has many low-income residents. Campono said attendance peaked in 2014, with 10,000 meals served. Last year the number dropped to 7,300.

Afterward, longtime lunchers Marie Boisvert, 75, and Marie Cecile Ward, 80, lingered at their table. They became friends through an arts and crafts class, which, they ruefully noted, Champlain no longer offers. "We used to fill that back room," recalled Boisvert, who now goes to a ceramics class in South Burlington to get her craft fix. "That started my love affair with art," said Ward, taking a break from drawing in a tiny sketchbook.

Neither had any interest in joining Campono, who at that moment was leading a group of seven Bhutanese seniors in dancing the hokey pokey. Nor had they been moved to partake in the armchair exercise class offered before lunch. Sitting in plastic gray chairs, the four female participants in that class took their cues from an exercise video that, judging by the instructor's leotard, was produced several decades ago.

Out in the New North End, the Heineberg center has maintained its $100,000 budget, which also relies on funding from the city and from United Way. "The concern there is participation," Hartnett explained. "It's dwindling."

Executive director Pam Slattery said the center was providing roughly 5,500 meals a few years ago. Last year, it served 4,300, with a total of 475 people coming for lunch and activities.

During lunch last Thursday, eight elderly women dined on chicken and biscuits. They didn't dawdle when they were done — by 12:15, half an hour after the food was served, the basement room was empty except for a 96-year-old woman eating canned mandarin oranges out of a Styrofoam cup.

Cribbage was listed on the calendar for 12:30 p.m., but no one came. At 1 p.m., a group of nine gathered upstairs for bridge. Playing around two tables in a room that holds 200 didn't seem to bother Diane Noyes, an enthusiastic regular who said Heineberg is at the center of her social life. Surveying the mostly female crowd, she suggested, "Maybe poker would draw in some guys."

The absence of poker is just one of many theories about why so few people are using these centers.

In the case of Heineberg, Slattery has a simple explanation: 55 regulars died during the last year and a half. "That's why our numbers have dropped," she said. She also blames lack of transportation.

Campono agreed that finding affordable rides poses a barrier for would-be participants, and, for those who drive, parking at Champlain is limited.

Despite similar obstacles, other senior centers are bustling. Just over the bridge, the Winooski Senior Center is financially healthy and increasingly popular, according to director Barbara Pitfido, who estimates that 30 to 40 people attend the weekly lunches.

Concerned about the situation, some senior advocates are contemplating a more existential question: Are Burlington's centers meeting the needs of nouveau seniors, aka baby boomers?

"Senior centers need to change to reflect the population of older adults," said Gail Moreau, who spent 18 years as Heineberg's director and studied Vermont's other senior centers through a state grant.

Both of Burlington's centers have branched out beyond bingo. Slattery says Heineberg's yoga and tai chi classes are very popular; Champlain now caters to a New American crowd.

Moreau is among those who wonder whether the model itself may need to change.

"The generations that came before us were much more loyal to a particular center," said Moreau, who is 64. "I'm going to pick what I want to do and go wherever that opportunity is offered."

United Way's director, Martha Maksym, said her organization has been working for more than a year with other groups to survey Chittenden County seniors about their needs and determine the best ways to meet them.

One question under consideration: Does it make sense to have multiple organizations, each with their own overhead costs, delivering similar services?

The study group hasn't drawn firm conclusions yet, but Maksym acknowledged concerns about the long-term sustainability of senior centers.

Funding losses and looming building expenses at the Champlain Senior Center have already led its board members to conclude that their operation is not sustainable. They've asked the city to take charge of the center.

Burlington Parks, Recreation & Waterfront director Jesse Bridges seems poised to agree. He said his department will likely at least assume responsibility for providing a daily meal, possibly in a different location. McClure is owned by the Champlain Housing Trust.

Bridges hasn't made any promises about providing activities. But he pointed out that Parks and Rec already offers some senior programs, including a "very active" pickleball group,­ and wants to provide more. It's not uncommon for municipalities to run their own senior centers — in fact, Winooski's is city-run.

At the urging of Moreau and other advocates, Wright and Hartnett are now looking to expand the conversation.

They plan to introduce a resolution in mid-May asking the city council to create a committee to study Burlington's senior centers and to figure out how to best serve the city's aging residents.

"It's the fastest-growing population in Burlington," Hartnett said. "And it's the most forgotten about."