What's With the Lots Filled With Out-of-State Cars? 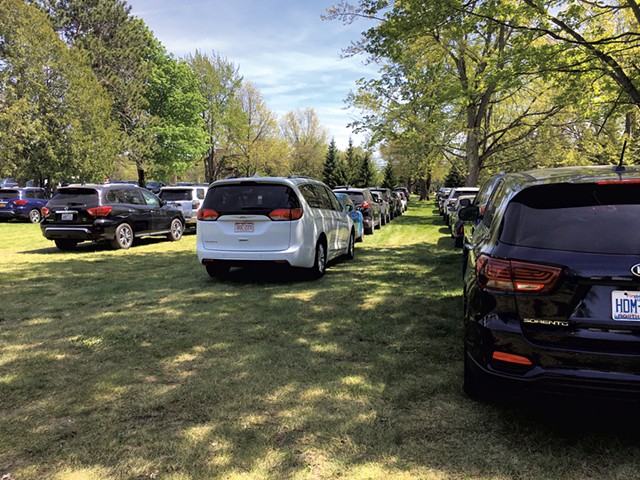 It started with a query from a central Vermont reader: He wanted to know why a normally desolate parking lot on the Barre-Montpelier Road was packed with cars. They all had out-of-state license plates, he noted with some suspicion, and sent a photograph to verify his observation. This was in early May, right around the time Gov. Phil Scott urged such vehicles and their passengers and their potential coronavirus cases to please not come to Vermont — an inadvertent othering followed by a rash of xenophobic incidents around the state.

Paranoia aside, it did seem curious that some 40 cars would sit unattended — our reader said they'd been there for "weeks" — in a lot next to stores that were closed by the pandemic. But another feature of the car collection gave us a clue, leading to a deduction of Sherlock Holmesian acuity. The bland color palette of these various vehicles could mean only one thing: They were rental cars.

When we posed this possibility to our reader, he confirmed: "Oh! There is an Enterprise nearby!"

So far, so good. Still, the question remained: Why were the cars sitting there for so long? Was each car being held in quarantine until the next driver could safely rent it and touch all its touchable things? Hmm.

We called Enterprise, only to be interrupted mid-explanation and told that media inquiries must be directed to the corporate office. We called the number our interlocutor provided. A very nice woman in St. Louis, Mo., baffled by our question, recommended we call a local office for Enterprise. We thanked her for the "help" and instead decided to pay a personal visit. We drove first to the South Burlington Enterprise on Shelburne Road and found it closed, with a sign on the door directing us to the office on Williston Road.

There we explained our mission to branch manager Shane Flanagan, a cheerful fellow who, on hearing our theory about cars in quarantine, chuckled — or perhaps smirked — behind his face mask and mumbled, "They're not in quarantine." We took this as oblique confirmation that the cars were indeed rentals, but Flanagan would reveal no more; we would have to talk to his supervisor. A call to said supervisor remains unanswered at press time.

We were reminded of an earlier, similar query from a reader about a bunch of cars parked in a lot — actually, a yard, with grass and trees — near Burlington International Airport. Said yard is adjacent to several parking lots reserved, according to signs, for Hertz and Avis.

We called director of aviation Gene Richards, who was decidedly more informative. He told us the vehicles were "waiting to get shipped out to someplace in New Jersey, to offset the cars needed in Burlington."

In other words, Vermont has no use for all those sedans and SUVs. The pandemic has halted nearly all coming and going.

Not surprisingly, the same is true across the country. Photographs from a recent Los Angeles Times article show many thousands of idle rental cars packed into the parking lots at Dodger Stadium and other vast tracts of concrete.

This month, rental pioneer Hertz — which also owns Dollar Car Rental and Thrifty Car Rental — filed for bankruptcy owing to crushing debt. A company official told the New York Times on May 22 that the pandemic dealt a "rapid, sudden and dramatic" blow to the business. The article further noted that rival company Avis was better positioned to ride out the downturn, while "Enterprise, a private company, is better diversified and not nearly as reliant on rentals at airports."

Purveyors of rental cars — indeed, of all forms of travel — may find that people are doing less coming and going even after the pandemic.

Meantime, the stock of cars is fluctuating in the grassy lot at the corner of Airport Parkway and White Street in South Burlington. The area was full last Thursday; on Sunday it was empty, though the marked rental-car lots were still filled with vehicles.

Neighbor Bonnie Deforge, who has lived on Dumont Avenue, just west of the grassy lot, for 22 years, has a front-row seat to these automotive proceedings. "They always use the parking lot, but parking on the grass is new," she confirmed. "It looks a lot prettier when the cars aren't there."