What's With the Huge New Drainage Ditches Along Vermont Roads? 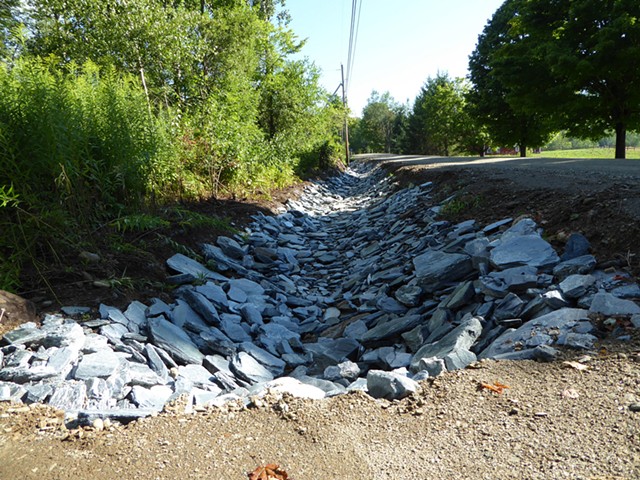 It's highway construction season, that time of year when the hills are alive with the sound of truck back-up alarms. The Vermont Agency of Transportation and local public works departments have nearly as short a work season as farmers, so they make highways when the sun shines.

While cruising the roads of Vermont, perhaps you've noticed crews digging some unusually large drainage ditches and installing new culverts big enough to drive a truck through. A few Seven Days readers have noticed as much in recent months and wrote to ask: What's up with that?

One Underhill Center resident emailed photos of some said behemoths that appeared in her neighborhood. They were deep enough to expose the roots of mature trees and treacherous enough to strand cars that might slide off icy winter roads. One neighbor (who asked not to be identified for fear of provoking the wrath of her local road crews) likened the gullies to "something you'd see in trench warfare."

A similarly large drainage swale was built last summer alongside East Thompsons Point Road in Charlotte. Until the vegetation grew back this spring, the ravine looked like the half-pipe that snowboarders ride at ski resorts.

So, what's going down with Vermont's new roadside Alpine slides? In short: climate change. As Vermont experiences an increase in both the frequency and intensity of severe weather events, state and local municipalities are beefing up their stormwater infrastructure to minimize erosion damage caused by severe flooding. In addition, these larger drainage systems reduce the flow of pollutants into Vermont's lakes and streams.

Many of these lessons were learned the hard way. This week marks the sixth anniversary of Tropical Storm Irene. Beginning on August 28, 2011, parts of Vermont were inundated with as much as 11 inches of rain over a 48-hour period. According to data from the Vermont Agency of Natural Resources, the storm damaged more than 500 miles of highways and at least 300 bridges. For a time, 13 communities were left without any navigable roads in or out.

The repair costs were equally earth-shattering: $63 million in private insurance claims, $153 million in state and local costs, and more than $600 million in federal reconstructions bills.

Though Irene caused the worst flooding Vermont has seen since the great flood of 1927, no one thinks it will be the last such storm. Since 2011, the state has logged at least one federally declared natural disaster per year.

Municipalities large and small, as well as nonprofits and individual citizens, haven't been sitting on their hands waiting for the next big one; they're working to make their own communities more storm resilient.

The roadside project in Charlotte offers a snapshot of those proactive efforts. In 2014, members of the Charlotte Congregational Church and the Lewis Creek Association — a nonprofit organization involved in water conservation efforts in Charlotte, Ferrisburgh, Hinesburg, Monkton, Shelburne and Starksboro — got together to talk about how they could improve the water quality of Lake Champlain.

An outgrowth of that meeting was an initiative dubbed Ahead of the Storm, a public-private partnership for addressing water quality and storm resilience. Explains Krista Hoffsis, program coordinator with the Lewis Creek Association, the goal of AOTS is to identify locations in Charlotte, Shelburne and Hinesburg that drain large volumes of water. Next, engineers and hydrologists figure out the most effective ways to manage that water flow and then, using public and private money, create demonstration projects for educating the public about "optimal conservation practices."

Currently, the Lewis Creek Association has 15 AOTS sites in various stages of design and implementation in those three towns. Thus far, reports Hoffsis, three have been completed: the Hinesburg rain garden on Silver Street, the Munroe Brook rain garden in Shelburne, and the swale enhancement and check dams on East Thompson's Point Road in Charlotte.

Regardless of each projects' size, all share the goal of slowing down the water's flow, spreading it out and giving it time to soak in.