What's With the Giant Table and Chairs in Tinmouth?

Who among us doesn't love a good country drive, especially during Vermont's foliage season? As you weave your way among the state's mountains, farmlands and small towns, you're likely to lay eyes on some compelling roadside attractions amid swaths of seasonal colors. You'll see country stores, produce stands, cairns, waterfalls and, if you drive through the tiny town of Tinmouth, an enormous table and chairs. Say what?

Let's back up a bit. A Charlotte couple recently took a day trip through the Rutland County area and came upon a bewildering scene. In a small clearing just off Route 140, a set of four oversize wooden chairs was grouped around an equally gargantuan boulder.

No signage accompanied the titanic tableau, though the rock was appointed with slabs of tree trunks cut to look like dinner plates and taller cylindrical pieces of birch that appeared to mimic cups. It looked like a forest-dwelling giant's dining room set. Curious about its origins and purpose, the couple snapped a few pics and sent them to Seven Days. Fee-fi-fo-feff, we smelled the makings of a WTF.

In a call to Tinmouth's town clerk and treasurer, Gail Fallar, we learned two things. The woodsy art installation in question is called Table Rock, and the town's fire chief of 30 years, Marshall Squier, created it. The 66-year-old lifelong Tinmouth resident is also a dairy farmer, justice of the peace and, in his words, "mature forest products extractor" — aka logger.

Squier's inspiration for Table Rock can be traced back to the origins of the Iraq War in the mid-aughts.

"That rock had been sitting there, and I'd been looking at it for all these years wanting to do something with it," he explained in a phone call. "I said, 'Wouldn't it be nice if we brought all of the principals over and sat them [down] and made them not go to war but figure it out right there?'"

Be that as it may, it's hard to imagine anyone sitting down at Table Rock for such a serious discussion. The chairs are approximately eight feet high and nearly four feet wide. The stone itself is imposing at five feet high with a diameter of roughly 15 to 18 feet. After climbing into one of the chairs, this reporter felt like a toddler sitting at the grown-ups' table.

The installation technically sits on private property. Larry and Cris Carabeau, proprietors of nearby dairy Windsong Farm, gave Squier permission to enact his vision on their land.

"The Squier family are pretty important people in this town," Larry Carabeau said by phone. "They've been there forever. [They're] very much community focused." 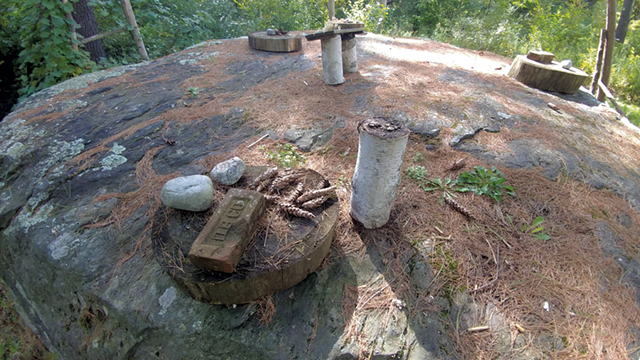 Carabeau said that a local conservation commission provides a lot of help with keeping the property trimmed and mowed, including a nearby path that leads up a brief but steep incline to another oddity, Frog Rock. Much smaller than Table Rock, Frog Rock bears a striking resemblance to a perched frog when viewed from a certain angle.

Squier said he frequently sees faces and forms in everyday objects such as Frog Rock — particularly in the trees with which he works.

If he happens to see something in a piece of limb wood, he'll reappropriate it as a found-object sculpture. One of Squier's creations currently sits next to Table Rock. On first glance, you might just see a tall branch with four forked ends leaning up against a tree. But if you look at it just right, you can see what Squier sees: a giraffe.

"Some people have the eye," said Carabeau, referring to Squier's uncanny ability to see faces and objects where others can't.

Squier is incredibly humble about his creations; he's the opposite of proprietary.

"I give them away, I leave them in the woods, I put them beside the road," he said. "I do these things, and I leave them. I don't really like credit for anything I do. I just do it."

From time to time, his works have been stolen.

Relatively immovable, Table Rock gets used for all manner of events, according to Squier. People gather, have picnics, meditate and even get married there.

The attraction became so popular, in fact, that the town eventually installed a small pull-off for motorists to stop and take a peek at the odd assemblage. Perhaps Squier's way of looking at the world is catching on.