What's with the giant gorilla holding a Volkswagen? 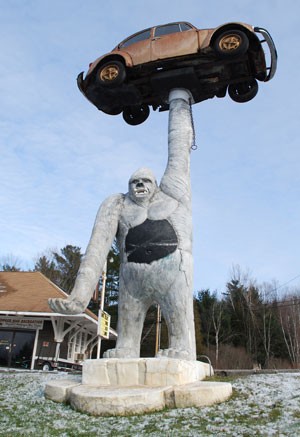 As you drive south from Middlebury on Route 7, the vistas are all ramshackle farmhouses, dense forests and rolling fields — your average Vermont fare.

That is, until you hit Leicester, where one roadside attraction has been turning heads and distracting drivers for 25 years. Meet Queen Connie, the enormous concrete gorilla stationed along Route 7, where she proudly hoists a rusting Volkswagen Bug high above her head. Erected in 1987, Connie was the brainchild of sculptor T.J. Neil. He pitched the gorilla as an advertising ploy to attract attention to Pioneer Auto Sales, the used-car lot over which Connie presides. Neil promised “a sculpture that would get world recognition,” recalls Pioneer’s owner, Joan O’Neil-Gittens.

The stunt worked: Over the next two and a half decades, Connie lured in visitors by the busload. She presided over one wedding, and earned Car & Driver magazine’s kudos, in 1991, at the top of its “Carchitectural Wonders” list.

“I can’t say that it put money in our pockets,” O’Neil-Gittens says, but then again, “It’s served its purpose.” She contends Connie put the dealership on the map.

O’Neil-Gittens met the sculptor who would create Connie during a trip to Cape Cod, where Neil and his family were living at the time. Neil died in 2010, but his son, T.J. Neil Jr., says his father got his start as an artist after leaving the Marines in the late 1950s. He got a job plastering in Boston, repairing old walls, crown molding and eventually the ornate plasterwork on historic buildings. By the time the Neil family moved to Cape Cod, Neil Sr. was experimenting with concrete as a medium for sculpting — “no molds, all hand-sculpted,” his son says.

“I grew up with aliens in the yard, and dragons and whales,” Neil Jr. recalls. He eventually went into the family business, and the Neils created sculptures all over the United States as well as internationally. Among Neil’s favorites is the concrete dragon commissioned by a man in Webster, Mass., who plunked the large sculpture in the middle of a manmade lake on his property. Neil says that, after visitors are buzzed through the gates of the man’s home, they drive around the lake — and the dragon belches fire at just the right moment.

Leicester’s resident gorilla is no fire breather, but Neil remembers her all the same. When I called his studio in Florida to inquire about the sculpture, he responded immediately with “Oh, Queen Connie!”

In 1987, the Neil family had already made the move to Florida, but Neil Sr. was planning a trip to complete a series of commissioned sculptures in the Northeast. He put in a call to O’Neil-Gittens, the automobile dealer who’d purchased a few of his smaller sculptures, including a dolphin and lighthouse, for her property. They were “more or less lawn ornaments,” she says — albeit lawn ornaments that required transportation in a truck.

So Neil Sr. made the pitch: Would O’Neil-Gittens consider something bigger — a landmark?

The sculptor and his clients began tossing around ideas. At first O’Neil-Gittens considered a pioneer woman, the embodiment of Pioneer Auto Sales. (The first female car salesperson and dealership owner in Vermont, O’Neil-Gittens says she chose her business name because she felt like something of a pioneer back in 1969, when she set up shop.)

But her son nixed the pioneer idea, so she put the question to Neil. If he could build anything, what would it be? He suggested a “King Kong”-type character — an enormous gorilla — and O’Neil-Gittens agreed. Her only stipulations were that the gorilla be female, in a nod to her trailblazing ways, and that the sculpture have some tie to the automobile industry. The dealership sponsored a contest for local schoolchildren to pick a name for the sculpture, and “Queen Connie” — so dubbed because of her concrete structure — earned a kid from Pittsford a bright-red bicycle.

Neil arrived on the Fourth of July in 1987 and spent the next several weeks constructing Connie on the small rise overlooking Route 7. He mixed his concrete in a wheelbarrow and applied layer upon layer atop a steel rebar armature. “I believe that gorilla’s got some serious steel in it,” Neil Jr. says. They hoisted Connie’s crowning glory, an old VW bug, into place with a crane.

“A structure should last lifetimes, as long as it’s taken care of,” says Neil Jr.

Connie’s seen better days — she needs a fresh paint job, O’Neil-Gittens concedes, and the VW has gone rusty with age. The dealership, too, has struggled in recent years. The family business once specialized in wholesale auto sales. In its heyday, the family stored as many as 100 cars on the lot and sold upwards of 1000 in a given year. Now just nine or 10 languish in front of the dealership, which is housed in an old West Salisbury railroad depot that was relocated to the roadside spot in the 1930s or ’40s. O’Neil-Gittens says that, though she and her son, general manager Michael Cameron, have dialed back operations in recent years, they’re hoping to jump-start the ailing business in the months ahead.

“It’s not easy,” he warns. “You’ve got to be a plasterer, an iron worker, an artist and an engineer to make these sculptures.” But the benefit, he says, is that he can create works of art that the public can touch and sit on.

Asked what he’s working on these days, he mentions a “cat-goyle” — think a mix of gargoyle and cat — and a few manatees and dolphins. Now firmly rooted in the Sunshine State, Neil is in manatee country.

“I would rather make dragons and gargoyles,” he says, “but you’ve got to pay the rent.”