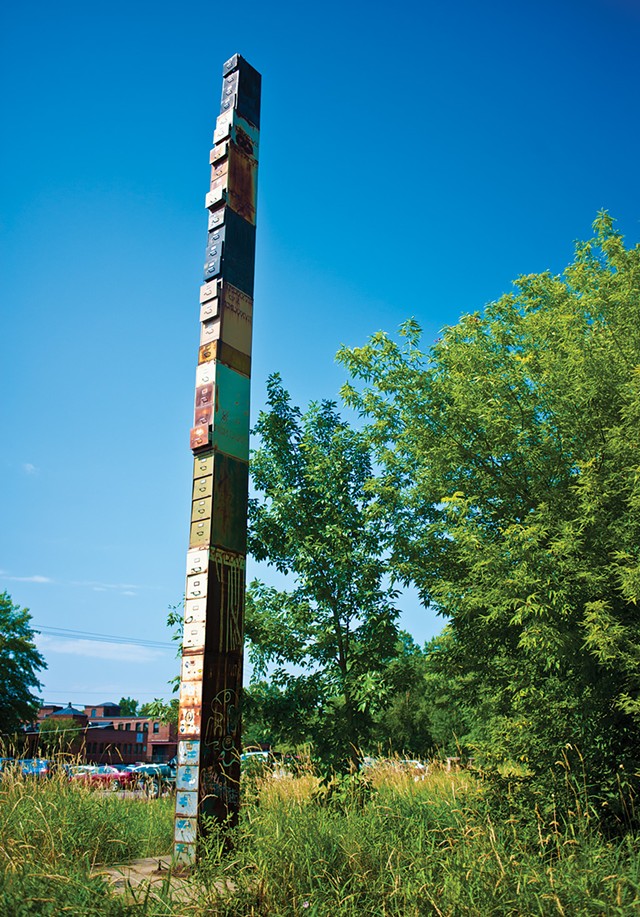 Several readers have asked us WTF is up with the tall tower of file cabinets on Flynn Avenue in Burlington. Not to mention wondering, "How was it made?" and "How does it stay up?"

We first answered those questions back in 2002, when the structure was erected. The official name of the tower is "File Under So. Co., Waiting for...," and it's an installation created by Burlington architect Bren Alvarez — with help from a couple of guys with a crane.

Alvarez, who is the curator of nearby Flynndog gallery, conceived of the tower in response to the controversial — and languishing — Southern Connector project. (Hence "So. Co.") That roadway was conceived in 1965 as a way to expedite traffic from Interstate 89 to downtown Burlington and relieve congestion on Shelburne Road. Since the project's inception, Shelburne Road has been widened, the Southern Connector has been renamed the Champlain Parkway and plans have changed, and changed again. The Parkway plan is still languishing, but back in the headlines. And recent public debate over the city's planBTV South End proposals has generated fresh protest against the still-unbuilt roadway.

The 2002 Seven Days article on the file cabinet installation features an optimistic statement from then-public works director Steve Goodkind: "The connector is moving forward. We still have a few permit hurdles, but construction could begin as early as the fall of 2003."

So you might be justified in surmising that Alvarez's original motivation — to satirize and symbolize "the bureaucracy of urban planning" — remains relevant 13 years later.

The tower consists of 11 metal cabinets with a total of 38 drawers: one for each year from 1965 to 2002. A bit more than 40 feet high, it stands on a two-foot-high concrete base. As for what keeps it upright: An interior steel rod runs through the entire stack.

The tower was assembled at Metalworks, just down the street from its current location, Alvarez says. "They spent a year welding [it together], doing structural work, and then erected it."

That's probably not going to happen, Alvarez concedes. What's more, if the Champlain Parkway, or a road by any other name, ends up being built, "File Under" will be smack-dab in its centerline. The assemblage will have to be moved from its current location, a weedy lot owned by the City of Burlington. "I hope the city would be willing to work with me to relocate it," says Alvarez. She envisions a prominent spot visible to passing motorists on the parkway, but notes, "Switchback [Brewing, also located on Flynn Avenue,] is interested if I can't find another site for it."

Meanwhile, Alvarez has been delighted by the public response to her file cabinet tower over the years. "Nearly every time I drive by, someone is photographing it," she observes. What's more, she adds, "It has inspired other things."

In 2002, local poet and playwright Marylen Grigas presented an on-site theater production called "Paper Highway" in a public ceremony marking the tower's installation, at which Burlington Taiko drummers also performed. Alvarez says the tower's image has appeared in local artwork and graphic design — including a drawing in an exhibit of urban landscapes; a new Switchback tap handle for Connector IPA; the promotions for a "local company that does file management"; and, somewhat ironically, a City of Burlington annual report. "It's also a destination for geocaching," she notes.

"File Under" also appears on national lists of things to see in Burlington — Alvarez's friends across the country tell her they've read about it, she says — and in a book about "weird Vermont" phenomena. The Roadside America website calls it the "World's Tallest File Cabinet."

Regardless of where "File Under" ends up, humans of the future may scratch their heads about it, too. In Grigas' 30-minute play — subtitled "Farce in Fifteen Files" — two CNN reporters in the year 2552 think the stack is a shrine to the gods. In half a millennium, who knows where our roads will lead?

The original print version of this article was headlined "What's the Story With Burlington's Tower of File Cabinets?"