WTF: What's with the anatomically incorrect bicyclist sign on Route 15? 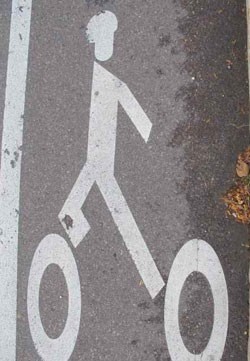 When you ride a bike from Essex Junction to Winooski, you have to brave a long stretch of Route 15 that isn’t exactly bike friendly. After miles of praying that driver after impatient driver will go around rather than through you, crossing the railroad tracks in Winooski is a relief — now you can roll into downtown on a bike lane. And it’s a nice lane, separated from traffic, marked at intervals with a reassuring symbol of a cyclist on his bike.

But wait a minute. What’s wrong with that guy?

Is that cartoon figure doing messenger tricks? Is he dancing on two wheels, thrusting a heedless arm back, lifting his knee nearly over the wheel in his enthusiasm? Is he a StairMaster emblem who has somehow made his way onto a bike lane? And why is his helmet tilted over his eyes?

This peculiar image doesn’t appear in the Federal Highway Administration’s Manual on Uniform Traffic Control Devices, nor did a Google image search turn up cyclist symbols like this one. So I spoke with Steve Palmer, Winooski’s city engineer and public-works supervisor, to get to the bottom of it.

“East Allen, that would have all been done as part of the downtown project,” Palmer said, estimating that the symbols went in over the summer of 2005. The work of buying and applying the road markings was done by a subcontractor. “Somebody obviously laid ’em in wrong,” he concluded.

These road markings, Palmer explained, are made of tough tape that is laid into the asphalt while still warm. He led me to a stack of boxes in the city garage and extracted a sort of giant toilet paper roll. Around it were wound sheets of blue cellophane and pieces of the word “YIELD” broken into long, attenuated strips, like evening shadows of letters.

“Somebody, I think, probably flipped [one] piece around the wrong way,” Palmer said. As with “YIELD” and many other road markings, the tape for the cyclist symbol comes in several parts, and the “dancing” leg was applied backward. It was meant to go between the arm and the straight leg. That it occurred so many times in succession does suggest a certain sense of humor on the part of the person applying that tape to the asphalt.

Some folks were less amused. The symbol made Michael Jager, cycling advocate and creative director of JDK Design, think of police chalk. “It looks like a dead body,” he said. “Does it communicate that you can ride a bike here? Yes, I suppose.” But, he added, graphic consistency is important.

Jager pointed out that, in Burlington, several different bike symbols appear on bike lanes; he thinks the town would be better off choosing one and sticking to it. (Similar inconsistencies can be seen in Winooski.) “I do think standardization of information-graphic systems builds respect,” Jager said.

But Winooski seems to at least tolerate its egret-legged cyclist. Palmer admitted he hadn’t noticed and said no one had pointed it out to him in the six years since it was laid down. “I think it’s kinda funny that nobody caught it,” he said. “We had a consultant that was overseeing all of the fieldwork for us, too. They never caught it.”

That stretch of road, Palmer noted, will be repaved within a couple of years, and the city plans to lengthen an existing multiuse path running along eastbound Route 15.

So the dancing cyclist wasn’t, after all, the fevered vision of some designer trapped in a cubicle. It was a rollout glitch.

With modest hopes of tracking down the actual culprit, Seven Days spoke to Deb Ricker, vice president and owner of L&D Safety Marking in Montpelier. At six years’ remove, though, neither she nor Palmer could be entirely sure whether L&D was the subcontractor on this particular job. “I guess it was just plain old common error,” she surmised. “These types of markings come preformed, so it’s like a puzzle — you just put it together. I’m sure it wasn’t done on purpose.

“It surprises me that it got through an inspection,” Ricker added. “We don’t want to confuse the traveling public.”

When viewed in his bike lane, the stick figure is clearly intended to be a cyclist, albeit a strange one. But when Christine Hill, assistant shop manager of Bike Recycle Vermont, looked at a photo of the road marking, she didn’t see that at all. “It looks like a man karate-chopping two doughnuts,” she said, laughing. “I just picture him coming from above, like in a ninja fashion, like when they fly through the air.

“What I will say,” Hill added, is “that was absolutely made by someone who does not ride a bicycle.”