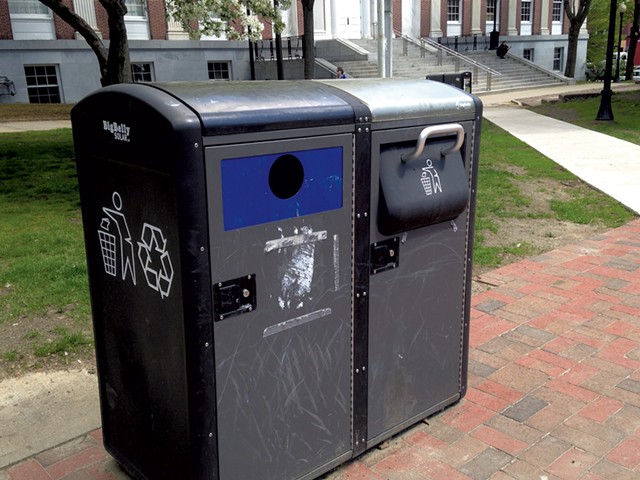 In recent years, Vermonters have grown accustomed to seeing solar panels almost everywhere. Acres of formerly agricultural land have been repurposed into shimmering solar farms, while photovoltaic panels have proliferated on the roofs of houses, businesses, schools, hospitals and airports. It's now common to see solar-powered traffic message boards along Vermont's highways; the Agency of Transportation plans to install more solar panels at its rest stops, maintenance garages and rights-of-way.

But the purpose of some solar-powered devices — notably, Burlington's solar-powered trash cans — isn't immediately apparent. Take a stroll through City Hall Park, on the Burlington waterfront or along downtown Main Street, and you'll spot more than a dozen trash and recycling receptacles, each with a photovoltaic panel on top.

Do these high-tech gizmos open their lids automatically? Spritz the air around them with floral-scented deodorizer? Shoo away seagulls, squirrels and bees? Given their hefty price tag of $5,000 apiece, shouldn't these garbage receptacles perhaps also serve as free Wi-Fi hot spots? WTF?

In fact, the 21st-century "smart bins" are reducing the Queen City's carbon footprint, saving its maintenance staff time and money, and keeping parks, sidewalks and the waterfront cleaner, more aesthetically pleasing and free of pests (other than the human kind).

Jesse Bridges is the director and harbormaster at Burlington Parks, Recreation & Waterfront. As he explains, the department purchased its first two smart bins in 2013 as part of a pilot project in City Hall Park to test the technology of the Bigbelly waste and recycling system. Manufactured by Needham, Mass.-based company Bigbelly, these smart bins use solar power to drive an internal trash compactor, which increases the units' capacity as much as fivefold.

The problem with the old open-top garbage cans, says Bridges, was that if someone stuffed in, say, four pizza boxes, the bin would seem full despite having extra capacity. As a consequence, trash cans would often overflow with garbage and get cross-contaminated with recyclable materials.

The smart bins also address a second, information-related problem. In the past, Bridges says, his maintenance crews spent hours driving around the city to check and empty hundreds of trash barrels. Some, like those on Church Street and the waterfront, would fill up several times a day, while those in more remote areas, such as Ethan Allen Park, could go days or weeks before needing to be emptied.

To make such routine checks unnecessary, each Bigbelly waste bin is outfitted with internal sensors and wireless technology. They automatically alert maintenance workers via email when the bin is nearly full — putting a whole new spin on the phrase "junk mail."

The technology has demonstrated its longer-term value, Bridges points out, as the city has replaced conventional trash cans with smart bins elsewhere. Following the success of the first two bins in City Hall Park, Seventh Generation donated $25,000 to the city to buy another five Bigbelly receptacles for the Burlington waterfront. Then, about two years ago, the city leased, rather than bought, several dozen more Bigbelly bins to deploy to outlying areas.

Today, Bridges says, Burlington has about 40 of the receptacles citywide, each of which records data about how often the bin is filled and emptied and then transmits that data to the cloud. Like Burlington Electric Department's smart meters, smart waste bins provide the city with reams of information that can improve efficiency, maximize recycling and minimize the environmental impacts of waste management.

As for cost savings, Bigbelly's marketing material claims that its smart-bin technology, which is now employed in every state and nearly 50 countries, can reduce a municipality's waste-management expenses by as much as 80 percent. Bridges notes that, so far, his staff hasn't crunched those numbers.

"For us," he says, "it was really about adding capacity to be dealing with other things." He points out that the parks department alone oversees more than 500 acres of property, while the Department of Public Works maintains miles of streets, sidewalks and rights-of-way. Minimizing the need to check garbage cans every day allows city workers to focus on different tasks.

"It definitely has a cleaner look," Bridges says of the smart bin. "There's not a cost savings [associated] to that, but it is a measurable impact in terms of community benefit."

Generally speaking, feedback on the solar-powered bins has been favorable, he reports.

"The notion that your trash can email you when it's full at the end of the day, people generally think that feature is fascinating," says Bridges. "And because they're solar-powered, you can put them anywhere."

In addition, when the lease expires on the current bins, the city can upgrade to the newest smart technology.

As for the idea of smart bins providing Wi-Fi hot spots? In 2015, New York City installed Wi-Fi units inside some of its Bigbelly waste receptacles in lower Manhattan.

The original print version of this article was headlined "What's the Deal With Burlington's Solar-Powered Trash Cans?"