WTF: What's up with the "Wolf Tree" at Red Rocks Park? 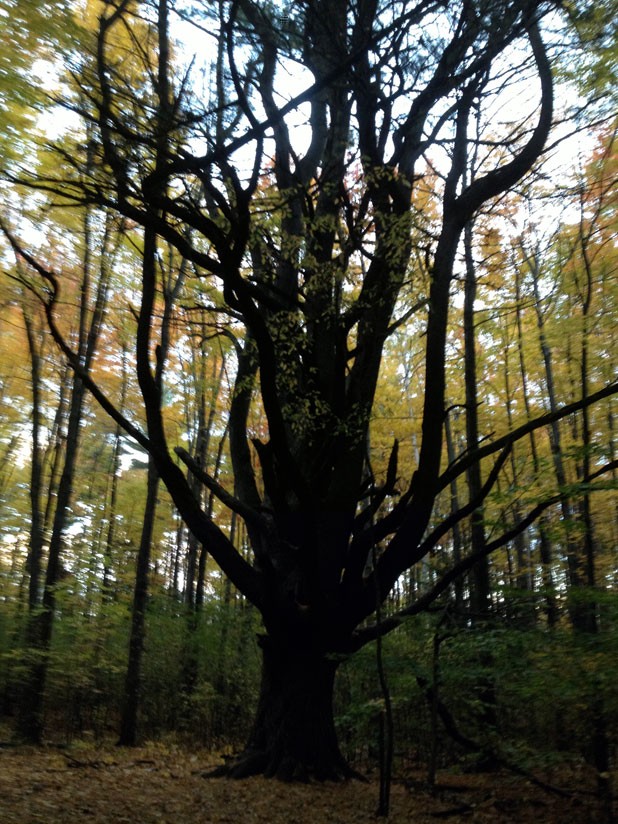 If you walk in the main entrance of Red Rocks Park in South Burlington and head straight along the old carriage road, instead of veering left toward the beach, you’ll encounter a pleasing variety of flora and fauna. You’ll hear the occasional woodpecker hammering away in an old tree and pass fern groves. You’ll see dogs gallivanting in gleeful defiance of the posted leash laws — and you’ll hope their owners still abide by the poop-scooping law. In the warmer months, you’ll find hordes of thrill-seeking youths flocking to the park’s notorious lakeside cliffs, or perhaps an elderly couple on their way to the Shelburne Bay overlook. Red Rocks is a local treasure, a woodland diamond in the suburban rough.

As you continue west, a few hundred yards before the hiking trails, you’ll notice a small clearing at the end of a worn path just off the gravel road. And, wait — what’s that? Looming above the forest stands a gnarled monolith and bona fide natural curiosity: the Wolf Tree.

The tree is a twisted giant. While most of the forest here grows straight and true, the bare limbs of the Wolf Tree — also called the Wolf Pine — jut every which way. They wind upward and outward in arthritic spires until the old tree crests the forest canopy, where bushy pine needles, its lone vegetation, soak in sunlight a good 20 feet above the next-highest trees.

Particularly in late-day light, the tree’s mangled limbs cast an eerie shadow, like something out of an Edward Gorey illustration. Considering that nearby eclectic lakeside neighborhood Queen City Park was once a summer colony of the Vermont State Spiritualist Association — a group rumored to dabble in the occult — it makes you wonder if the tree’s history includes otherworldly phenomena. Would that explain the railroad tie mysteriously spiked into its trunk?

While reports of supernatural doings are unverifiable, the Wolf Tree also evokes a natural question. Red Rocks is a new-growth forest, former farmland that only became a wooded park in the middle of the 20th century. How, then, to explain the ancient Wolf Tree?

We asked Sophie Mazowita, a graduate student in the Field Naturalist Program at the University of Vermont. As part of her master’s project, Mazowita is studying Red Rocks Park and reporting to South Burlington’s Recreation and Parks Department on strategies for managing the park’s long-term viability. She has taken a keen interest in the Wolf Tree.

Mazowita explains that 150 years ago, the area around and including Red Rocks was pasture. In those days, she says, wolf trees were a common sight on Vermont farmland. While most trees were cut down to make way for pasture, these were spared from the ax because they provided shade for grazing animals, such as sheep and cattle, and some degree of protection from predators, including wolves. Standing sentinel in open fields, wolf trees had no competition for sunlight and took full photosynthetic advantage of the opportunity to grow, both vertically and horizontally, to monumental proportions. That dominance of the landscape is thought to be another possible source of the term, owing to wolves’ reputation for monopolizing resources.

The Red Rocks Wolf Tree’s likely history of lording unopposed over open farmland may explain its girth, but its crooked arms remain curious.

Mazowita identifies the tree as a white pine, a tree that generally grows straight. That is, unless it’s invaded by the white pine weevil, a type of beetle.

White pine weevils nest in trees and lay eggs. When the larvae hatch, they can deform the terminal shoot, or trunk, causing the tree to grow in unusual directions. Looking at the twisting maze of limbs that begins about eight feet up the Wolf Tree’s expansive trunk, Mazowita suggests it was infested early in its life, and often.

According to Mazowita, white pines grow one ring of limbs each year, so a naturalist can usually date a tree simply by counting rows of limbs. Not so the Wolf Tree.

“It’s almost impossible to tell how old this tree really is,” Mazowita says, her gaze drifting upward as she notes where the main shoot has splintered, again and again, in myriad tangles.

Nor can she date the tree by measuring the rings in its core. With a diameter of 51 inches, the Wolf Tree is too massive for Mazowita’s coring instrument to pull an accurate sample. By comparison, she estimates that the second-largest white pine at Red Rocks measures about 30 inches in diameter.

Mazowita guesses the tree could date back as far as the 1700s, but she can only say for sure that the Wolf Tree has been an imposing fixture here for a very long time. From her backpack, Mazowita pulls a series of aerial photographs of Red Rocks dating from 1942 to 1988. In each, the massive tree is plainly visible as the landscape around it shifts from farmland to forest — photographic evidence that the Red Rocks Wolf Tree is indeed a sentinel from another age.