WTF: What's up with the teepee by Interstate 89 in Richmond? | WTF | Seven Days | Vermont's Independent Voice

WTF: What's up with the teepee by Interstate 89 in Richmond? 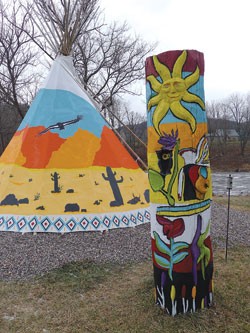 Over years of driving north on I-89, I have often gawked at the creamy white teepee sitting in a field between the highway and the Winooski River in Richmond. It looked almost abandoned in the middle of a damp lowland, and no road or path led there.

Earlier this year, the teepee vanished, and I forgot about it. Until this fall, when it appeared again. This time, a neon-colored painting had begun creeping up the teepee’s sides, as well as up the totem pole beside it. Yet I never saw a car, a person or any sign of life nearby.

Who the hell was painting the teepee? And why was it there in the first place?

A colleague suggested I call the folks at the West Monitor Barn, just down Route 2 from the teepee. After some good-natured bargaining (they’d love the barn, an event space, to be mentioned in Seven Days’ next wedding issue!), the staff gave up the goods: the name of the teepee’s owner and his cellphone number.

A few minutes later, I was talking to cheerful Darin Pratt, who picked up his phone on the second ring. I don’t think it’s ever been so easy to reach a source, and, for all of the teepee’s seeming mystery, Pratt was anything but mysterious. He was happy to dish on the teepee he erected eight years ago.

“I was having trouble sleeping, and I’d imagine myself in these different places where I would be sleeping,” he explained. “Often, I pretended I was up in the woods in a shelter I’d constructed. Then one day, I pretended I was in a teepee. The next morning, I said, ‘Fuck it.’ I went online and ordered one.”

Pratt bought a 16-foot-diameter teepee for $1500 from an online outfitter and mounted it about 500 yards from his house, in a field just across the river. Pratt — who owns P&P Septic Service — recalled that when someone at work joked “that I couldn’t have a teepee without a zipline,” he put in one of those, too. The wire stretches from the bluff where his house sits then across the river to a sandy patch beside the teepee. “I’ve taken that zipline with a 12-pack of beer in my teeth,” Pratt said.

That vivid image is key: Rather than a place to cure insomnia, the teepee became a hangout for Pratt, his sons — three, all grown — and their friends. Inside, it had a gravel floor, a beanbag, a love seat, two chairs and a coffee table. And, despite its seeming fragility, Pratt’s home away from home survived spring floods, storms, even Tropical Storm Irene, when it was submerged under eight and a half feet of water.

But last New Year’s Eve, a wind storm blew the teepee down. “I spotted it downstream and got it with a bucket truck,” Pratt said, but the structure wasn’t in any shape to be remounted.

Then came more unwelcome news. Last March, Pratt had to put his camel, Otis, to sleep after a mysterious illness. In his seven years with Pratt, Otis had been popular with local children, who liked to visit him. Pratt still keeps peacocks, turkeys, two potbellied pigs, two donkeys and a barn cat on his 225-acre spread.

After several teepee-free months, Pratt ordered a new one in the fall — this one 18 feet high, two feet taller than the first. With friends, he pushed up the tarp on the same riverside spot, and beside it erected a totem pole he had found years ago along a Richmond road. Pratt thought the wood might look better painted. “I put an ad on Craigslist that said, ‘Paint my totem pole,’” he said.

Duxbury resident Priscilla Nelson answered the ad and showed up at the teepee for a few successive weeks, her kids in tow, to adorn the totem pole. When Pratt suggested she paint the teepee, too, she covered the exterior with a Southwestern scene of orange and red mountains looming over a golden desert filled with cactus and creatures, including a coyote chasing a hare.

As it turns out, there is a road leading to the teepee, a serpentine track virtually invisible from the interstate. On a recent afternoon, Pratt took me down that track in his red pickup, and soon we stood next to the teepee. It’s imposing and wildly colorful, with a perimeter so wide we circled it as if on a tour, checking out Nelson’s work.

It was a little surreal to be so close to the “mystery” teepee, and even more so when I heard Tears for Fears’ “Everybody Wants to Rule the World” spilling faintly through the canvas.

“Is that … music?” I asked unnecessarily.

“Oh, yeah. Come on in!” Pratt untied the teepee’s flap, and we ducked inside, along with Jennifer Lada, Pratt’s partner. The teepee was so high that we could easily stand upright. It still has a dirt floor, but, instead of a living room, Pratt has gone for a full-on tiki experience: A bamboo bar is strewn with tiny white lights and a mask, surrounded by fake palm trees and two cocktail tables. Rather than a fire, an open flame roars from a compressor, making the inside cozy. The painted outside casts a glow not unlike a Polynesian sunset.

Though there wasn’t a bottle in sight, the setup spoke volumes. “It seats seven,” said Pratt about the teepee-cum-tiki-lounge.

After a Thanksgiving snow a few weeks ago, Pratt sent Nelson a picture of the teepee covered in white. “Priscilla, I’m sorry, but all of the paint fell off,” he wrote waggishly.

Now that a teepee is back in its rightful place, Pratt is turning his attention to another pressing matter: His farm lacks a camel.

“The camel was a big hit, and I’m going to get another one in the spring, because everyone is always asking me,” he said.

Perhaps, Pratt, Lada and their friends will come up with the new camel’s name over Mai Tais.