WTF: What's Up With the Sunken Boat Off North Beach? 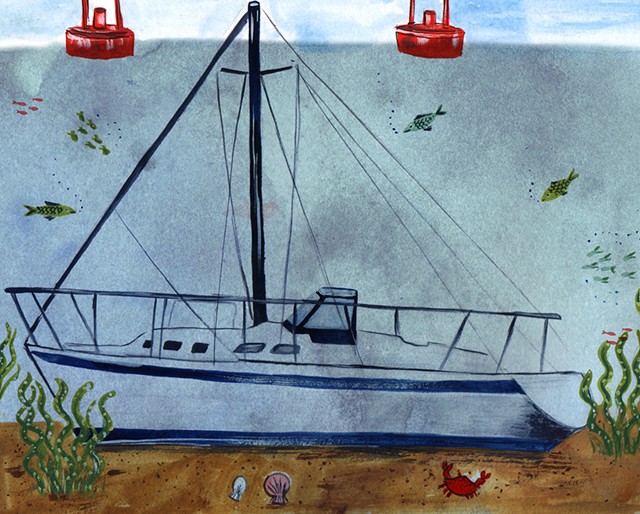 A few hundred feet from the shore of Burlington's North Beach, a couple of Coast Guard buoys bob in the waves. They're in open water, beyond the point where natural hazards such as rocks or fallen trees might lie in wait for unsuspecting sailors or swimmers. Turns out, the buoys are attached to the top of the mast of a submerged sailboat. WTF is the boat doing there? Who owns it? And who's responsible for getting it out?

A sunken ship is not unusual in Lake Champlain, which has been claiming vessels for as long as people have been plying its waters. The Lake Champlain Maritime Museum documents several modern powerboats — as well as such historic wrecks as Benedict Arnold's Revolutionary War gunboat Spitfire — that remain on the bottom of the lake. Certified divers can even swim among the many wrecks that constitute the Lake Champlain Underwater Historic Preserve.

But the situation surrounding the North Beach sailboat is unusual.

According to Lt. David Bourbeau, chief of the waterways management division for the U.S. Coast Guard's Northern New England sector, an October 1 report indicates that the boat is a 32-foot Ericson sailboat that had been anchored near North Beach all last summer. Bourbeau puzzled over one detail in the report: an uncertainty about the boat's name. It's either Azalea or Gracie. (Or maybe Azalea or Gracie. It wouldn't be the first boat with a weird name.)

"The boat was anchored bow and stern," said Jesse Bridges, harbormaster for the City of Burlington, "and back in mid-September, we had a fairly significant storm event. The way that it was anchored, and the way that the wind turned, it just took her right down."

Since then, the boat has slowly slipped from view.

Bourbeau, who is stationed in Portland, Maine, said the Coast Guard has concluded that the boat's protruding mast poses no navigational hazards, and that the vessel is not leaking any pollutants. That doesn't mean authorities intend to leave the boat in place, but nor is it likely to be raised from the depths anytime soon.

"The problem with this vessel," said Petty Officer John Canario of the Coast Guard's Burlington station, "is that we don't know who the owner is."

Despite efforts to find that person, he added, no one has come forward to claim it.

The boat itself hasn't yielded any evidence. A properly registered boat has a hull identification number (HIN) — a unique 12- or 14-digit serial number, typically printed on the vessel in multiple locations, that can be checked against boat registry databases. Canario said that an underwater-camera search for identifying marks yielded no HIN on this vessel.

In his three years as harbormaster, Bridges has seen several capsized and submerged boats. But this is the first case in his tenure, he said, in which a crippled vessel's owner has been impossible to locate. That's a problem, because the law states clearly that the owner of a submerged vessel is responsible for raising it again.

If an ownerless sunken boat poses a navigational or environmental hazard, the Coast Guard will contact the U.S. Army Corps of Engineers, the agency with the authority to remove such wrecks.* But since the service has determined that this boat poses neither, the task — and cost — of its salvage falls to the City of Burlington.

"We may still have time to get a diver in the water and get a hull ID," said Bridges. "We'd like to get it resolved without having to spend local dollars."

If no owner is located after a reasonable search, salvagers can lay claim to the vessel and all it contains. If that sounds like a treasure opportunity straight out of The Goonies, fold up those treasure maps right now. This sunken vessel is no booty-laden pirate ship but an apparently abandoned boat that's likely to wind up in pieces in a couple of Dumpsters.

Mickey Maynard, a Coast Guard-licensed captain and owner of Plattsburgh-based Lake Champlain Marine Resource and Services, described boat salvage as a chancy, costly operation. Speaking from Florida while on a "working vacation," he said that a salvage company might charge a boat's owner up to a "couple of hundred dollars an hour," a sum that doesn't include numerous miscellaneous fees. The total, Maynard said, could run "well into the thousands of dollars."

A boat is worth salvaging only if it has solid resale value. At the moment, it's not clear whether the North Beach boat is worth the trouble.

Another factor looms large in this aquatic mystery: the weather. Even if the vessel is not currently leaking fuel, it might contain fuel tanks that could rupture in the cold. "That could be a serious issue," Maynard said.

The buoys have reduced or eliminated any danger the boat might pose to other vessels. But Pierre LaRocque, owner of the Vergennes-based Champlain Divers International, said that the coming winter could make the boat a hazard of a different kind: Its protruding mast could spell trouble for snowmobilers who zip across Lake Champlain when the lake freezes over.

LaRocque neatly summed up the sailboat's current situation: "No one really knows anything about it." And unless that changes, the City of Burlington will have to pick up the tab for salvaging a boat that's dead in the water.

Correction, December 4, 2015: An earlier version of this story incorrectly named the agency responsible for removing sunken boats on Lake Champlain. It is the Army Corps of Engineers.