WTF: What's up with the bridge to nowhere over the Burlington Beltline? | WTF | Seven Days | Vermont's Independent Voice

WTF: What's up with the bridge to nowhere over the Burlington Beltline? 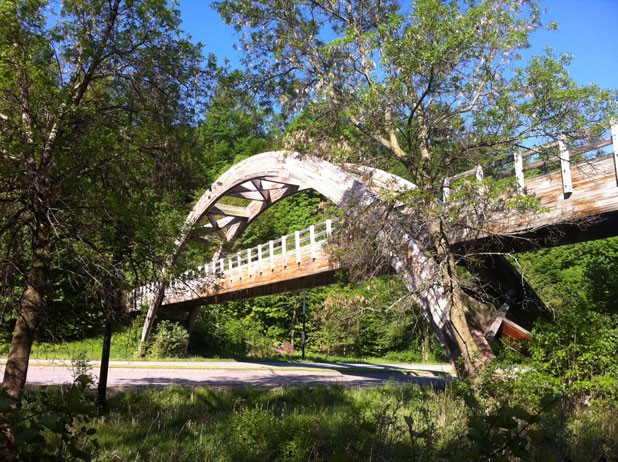 You might remember Alaska’s “bridge to nowhere,” a proposed connector between the mainland and an island of 50 residents that became a talking point during the 2008 presidential campaign. But Burlington has its own “bridge to nowhere” — one that actually was built and that, thankfully, hasn’t become a political hot potato.

A number of bridges cross over the Burlington Beltline, aka the Northern Connector, the 3.3-mile section of Route 127 that connects northern Burlington with Colchester. One bridge links the Ethan Allen Homestead with North Avenue and the Route 127 exit ramps for cars, while two others connect parts of the New North End with the Route 127 bike path.

And then there’s the fourth bridge, a soaring wooden arch over the highway. Problem is, the bridge doesn’t appear to connect anything at all. WTF?

If you’ve wondered about this mysteriously useless bridge, you’re not alone — it’s vexed Burlingtonians for at least a couple of decades. A Burlington Free Press article from August 19, 1991, bore the title “No one treads on Burlington’s bridge to nowhere.” Not much has changed since then.

The bridge was constructed at a cost of $379,400 in 1984, at the same time as the northern end of Route 127 that passes under it, according to the Free Press article. Why was it built? The short answer is federal law.

“Because it was park land that the Northern Connector sliced through, the Northern Connector bifurcated a piece of parkway west of the highway,” says Rich Ranaldo, the Agency of Transportation engineer who designed the bridge. The land housing that stretch of Route 127 belonged to the Winooski Valley Park District as part of the Ethan Allen Homestead. Because the highway site was purchased with federal funds, a bridge had to be constructed to maintain the park’s continuity — even though the western side, in this case, was too steep and densely forested to be of much use.

If the bridge was never a magnet for practical use, these days it discourages even the curious from crossing it. Overgrown bushes shroud the entrance ramp from the Route 127 bike path, although a worn path implies that a few urban adventurers have attempted to cross the bridge.

But you won’t get much farther at the western end — it’s blocked by a chain-link fence spanning the walkway. Beyond the fence lies a steep, brush-covered hill, and, should you channel your inner Indiana Jones and bushwhack your way up the bank, you’ll eventually find yourself on Revere Court, an obscure residential cul-de-sac in the New North End. A real entry point here might be useful for nearby residents seeking to cross the highway, but “it would take a substantial amount of trail work to configure that trail directly,” says Mari Steinbach, Burlington Parks and Recreation Department director.

Steinbach’s department is now in charge of keeping the bridge closed, so that lost bikers and pedestrians don’t end up in someone’s backyard. In the meantime, if you’re looking to bike or walk to the other side of the beltline from the Burlington High School/North Avenue Alliance Church area, you’ll have to detour down to the bike path’s entrance off Manhattan Drive, or through Ethan Allen Park.

In the early ’90s, there was a proposal to move the bridge to the Burlington Bike Path, where it would have spanned the Winooski River and given access to Colchester, according to that Free Press article. As we know, a brand-new bridge was built in that spot instead. So the bridge remains in its current location over the beltline, serving no purpose but an aesthetic one — and perhaps standing as a monument to well-intentioned laws gone slightly awry.

Even if the bridge isn’t doing anything, locals can take solace in the fact that it’s still a pretty good-looking bridge. “We wanted to do something different,” Ranaldo says of the bridge’s design. “But within the boundaries of the park district, I think we wanted to do something a little more special, a little more appropriate for the setting. We had never designed a timber-arch bridge before, so it was a great process to go through.”

Currently, the bridge’s wooden frame is weathered and needs to be cleaned of graffiti and bird droppings, but it doesn’t look decrepit or abandoned. One employee in the Burlington Department of Planning and Zoning suggests that the bridge be rechristened the “artwork to nowhere.” Might we suggest attaching a big “Welcome to Burlington” sign to the structure, Vegas style?