WTF: What's up with the baseball players on Spear Street? 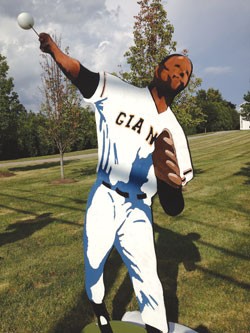 If you drive south along Spear Street in South Burlington in September, just a bit past the intersection with Swift Street and before you reach the endless expanse of McMansions down the road, you may notice an unusual sculpture gracing a lawn on the left side of the road. As you approach and clear a grove of pine trees, the first figure appears: a baseball player, clad in a gleaming white uniform with black and orange trim, his back bearing the number 24, seeming to run at full gait toward the road. Then another figure emerges, glove outstretched to the sky as a ball rockets downward. The ball disappears into the glove of a third figure. A fourth has wheeled and is turned toward an imaginary ball field. The fifth fires the ball, seemingly into oncoming traffic, losing his hat from the force of his throw.

Most baseball fans would recognize the images immediately. The wooden cutouts portray New York Giants center fielder Willie Mays making one of the game’s truly historic plays, known simply as “the Catch.” But lawn ornaments along this section of road are rare — the well-to-do ’hood is not exactly a habitat for pink flamingos or gnomes. And SoBurl is a long way from the fabled Polo Grounds in Harlem; farther still from San Francisco, where the Giants later moved and still play. So what in the wide world of sports is the Say Hey Kid doing on Spear Street?

The cutouts belong to local businessman and CEO of MyWebGrocer, Rich Tarrant Jr. He’s an avid baseball fan, though he doesn’t root for the Giants — Tarrant is a Yankees fan. But every year in September, weather permitting, he sends “Willie” racing after Vic Wertz’s screaming line drive. Why? September 29 is the anniversary of Mays robbing the Indians’ first baseman of a crucial extra base hit in the eighth inning of game one of the 1954 World Series.

“When I look at that play, I always think one of these days the ball is going to go over his head,” says Thom Ross, the artist who made the cutouts in 2004 and brought them to the site of the old Polo Grounds stadium in Harlem to commemorate the play’s 50th anniversary. “But he catches it every damn time.”

Ross, a painter and illustrator who is best known for his life-size cutout renderings of iconic historical images — especially those of the Old West — grew up watching Mays play in San Francisco, where the Giants moved in 1957. Ross gave the cutouts to his friend Tarrant several years ago before he moved from Vermont to Colorado, where he now lives and works. While he admits Mays is his favorite player, Ross says the cutouts, and the athlete’s incredible play, represent something larger than fandom.

“As an artist, my passion has always been for folk heroes and events that, for some reason, remain immortal,” he explains. Mays has often said that his World Series catch wasn’t the best he ever made. But, given the magnitude of the setting, it’s his — and the game of baseball’s — most famous.

Both Ross and Tarrant point out that Mays’ catch couldn’t happen today. The playing field at the Polo Grounds was cavernous compared to modern ballparks, with a center field that extended to 483 feet. Mays, playing shallow, raced back on contact to about 420 feet — a home run in most parks today — to make his improbable, over-the-shoulder running catch.

“It wasn’t a towering shot that Wertz hit and Mays could run under,” Ross explains. “It was a line shot. So everyone is frozen watching this one guy running after a ball that no one thinks he can catch.”

That improbability, he says, is why the Catch is more than famous: It’s symbolic.

“Allegorically, the ball represents your dream, it’s the thing that you pursue that you could never get,” Ross says. “By Mays catching that one ball, he proves to the world, ‘If I can do this, you can do whatever you want to do.’”

While perhaps not as profound as all that, the cutouts do elicit a range of reactions, Tarrant says, from passing drivers honking and yelling, “Say Hey Kid!” out their car windows to passersby asking, “Why do you have stupid baseball players in your yard?” Tarrant recalls one woman who showed up practically in tears. She used to watch Giants games sitting on her mother’s lap and wanted to thank him for reviving that memory.

It seems that most people who notice the cutouts on the side of the road have some connection to them, even if they don’t know who Willie Mays is or what the Catch represents.

“I got an email from a guy who passes it every day driving his kid to school,” says Tarrant, who only puts out the cutouts on sunny days. “One day his son said, ‘Hey dad, it’s going to be a good day.’ When he asked why, his son said incredulously, ‘Well, the baseball players are out.’”