WTF: What's up with the abandoned church and neighboring theater at Fort Ethan Allen? 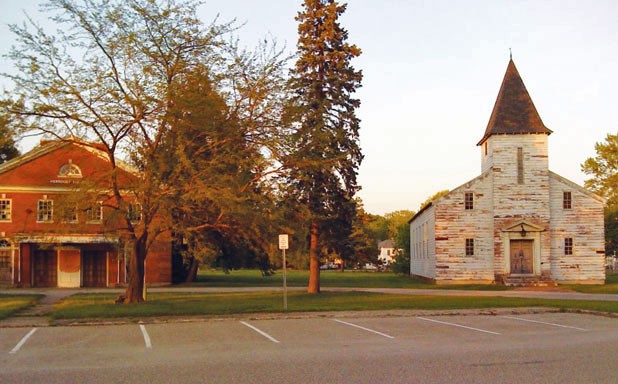 Peeling paint, broken glass and boarded-up windows make Fort Ethan Allen’s abandoned chapel, and the similarly dilapidated Herrouet Theater next door, the perfect setting for either an artsy photo shoot or a ghost hunt. Surprisingly, despite the rustic Instagram potential of both old buildings, a quick Google search is more likely to turn up allegations of paranormal activity there. Perhaps Sister Sara, the two buildings’ resident ghost, does not take kindly to smartphone-wielding hipsters. But what’s the story behind these deserted relics?

Fort Ethan Allen in Colchester, where they reside, was established in 1892 and served as a base for both the Army and the Air Force. After the base closed in 1960, Saint Michael’s College (SMC) purchased large chunks of Fort property — including both the chapel and theater. The latter was built by the U.S. government in 1933 for the amusement of service members; later, it was used by SMC students for films and theatrical productions.

The chapel was built eight years later, in 1941. The Society of Saint Edmund, which founded SMC, provided chaplains to the military bases for a number of years, but SMC has never put the Fort to religious use.

According to the Champlain Valley Ghost Hunters, who performed an investigation of the old chapel back in 2009, both buildings are haunted by a specter called Sister Sara — a nun said to have died in her sleep at the Herrouet Theater. The year of her death is unknown, but SMC legend alleges that her ghost saved Herrouet Theater from a 1978 fire by ringing a phantom bell. She’s described as a friendly ghost who haunts the area out of love for the theater and chapel. Despite Sara’s kindly reputation, SMC editorial marketing director Caroline Crawford says that being in the buildings — now used for storage — “definitely gives me the creeps.”

Vermont actor Rusty DeWees, on the other hand, claims that for him, the now-abandoned chapel is haunted only “with unbelievable joy.” Known as “the Logger,” DeWees got his start with the Vermont Repertory Theatre Company, a group that staged its productions in the empty chapel during the 1980s.

DeWees speaks reverently about the chapel-turned-theater. Remembering playwright David Budbill’s widely attended play Judevine, he says, “During the company bow, I’d look up into the upper left balcony and see Bob [Ringer, founder of Vermont Rep]’s standing silhouette. He’d be clapping, or wiping tears, or both. It was those reactions from Bob’s silhouette I worked all night to see. Of course,” DeWees admits, “these feelings … are common in theater — the atmosphere of the abandoned old chapel, for me, anyway, added to [their] depth.”

Ironically, the theater group performed primarily in the chapel, because the theater next door was not amenable to the experimental productions they wanted to stage. Vermont Rep left in 1990, when SMC, which had donated the space to the thespians, reclaimed it for campus use. Now both buildings are used mostly as SMC closets. But they do see a few high-adrenaline days every year, courtesy of the SMC Fire and Rescue squad.

Composed of SMC students, staff, faculty and alumni, the college’s Fire and Rescue squad was founded in 1969. The battalion of male and female volunteers serves both the campus and the surrounding area as part of the Colchester Fire Department. Peter Soons, chief of Fire and Rescue and director of public safety at SMC, says that when the old (“I wouldn’t call them abandoned,” he says) buildings aren’t being used as a space for the SMC theater department to build props, they’re made available to his squad for training.

Before the start of the school year, SMC Fire and Rescue holds a “preseason,” similar to a preseason training session for a college sport. At this “boot camp,” as Soons calls it, participants run through controlled drills meant to simulate situations in a real fire. They learn how to put out a car fire, hack a roof prop for ventilation, and go through the motions of a real search-and-rescue mission.

The squad has never set either the Fort Ethan Allen Chapel or the Herrouet Theater on fire, but during drills it does fill the buildings with fog, for example, to simulate the hazy smoke of a real fire so squad members can practice search and rescue, or navigation. Using the buildings is convenient, Soons says, as they’re not regularly used for anything else.

Many observers think it’s a shame that these lonely buildings are essentially abandoned. But SMC has no concrete plans to revamp them, says facilities director David Cutler, and, without some serious TLC, both the chapel and the theater will continue their quiet decomposition. In the meantime, cue the Hipstamatic.