WTF: What's up with that abandoned railroad car in Grand Isle County? 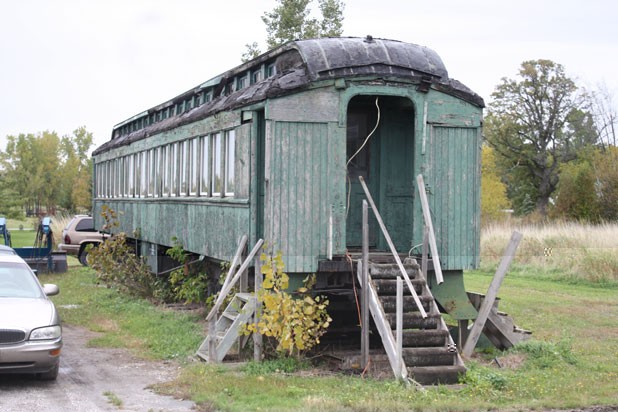 Drivers traveling through Keeler Bay on their way to the Champlain ferry to Plattsburgh, N.Y., may scratch their heads at the unusual sight of an old railroad car parked along the east side of the highway, just north of the intersection of U.S. 2 and Vermont 314.

The weathered, historic-looking train car is in decrepit shape, with dirty and broken windows, peeling green paint and rickety staircases at either end. Despite a “No Trespassing” sign to ward off nosy visitors, several inviting curios are visible from outside. They include two light-up “Feliz Navidad” signs, several stained-glass windows, a couple of mannequins dressed in hats and ties, and some cardboard cutouts of the Virgin Mary, Joseph and baby Jesus.

In one window hangs a hand-lettered sign that reads “The Golden Spike” — presumably a reference to the final railroad spike driven to join the first transcontinental railroad across the United States in May 1869 — along with the names “Bushway” and “Blow.” Oddest of all, the railroad car sits on a stretch of track as long as the car itself, but no railroad line ever ran through this particular section of Grand Isle County. WTF?

Turns out, Marge and Anthony Bushway purchased the train in February 1997. Marge Bushway, who still lives with her sister in a house just north of the train car, explains that she and her husband had been out leaf-peeping in Morrisville the previous autumn and stopped at the hardware store. There they found the car, which had apparently been parked on the spot for decades. (At the time, a tree was growing through it.) After eating lunch in a nearby café, Bushway recalls, her husband got a “hot flash” and decided he wanted to buy the railroad car, haul it back to Keeler Bay and convert it into a diner.

“It was in pretty bad shape, even worse than it is now,” Bushway reports. They hired a crane company to hoist it, which promptly turned around and charged the couple even more money to finish the job. “It was just hanging there,” Bushway remembers, “so what were we gonna do, say no?”

The railroad car was eventually deposited at its current location, where it has sat idle ever since. Sadly, Anthony Bushway’s plans to open a Golden Spike diner never materialized, as he died just three years later. (We encountered rumors that the town wouldn’t issue a permit for a restaurant on that location, but Marge Bushway insists their plans never progressed that far.)

In the intervening years, Bushway has occasionally decorated the train car’s interior during the holidays — hence the Feliz Navidad sign and Christmas lights — but otherwise it’s remained vacant and unused.

What’s the story behind the car itself? For that we turn to an 18-page history of the railroad car and its original owner, the now-defunct Rutland Railroad, written by Rogan C. Faith, a University of Vermont historic-preservation student, in October 1997.

According to Faith’s research, the Rutland Railroad car No. 707 was either a parlor or a smoker car (not a passenger car) built by the Wagner Palace Car Company of Buffalo, N.Y., most likely in 1891. It’s 70 feet long, weighs more than 30 tons and has the unusual design feature of three — rather than two — six-wheel trucks, presumably to increase passenger comfort.

Did this car ever rumble through Grand Isle? Highly unlikely, according to Faith. Based on extant signage on the carriage itself, it once belonged to the Rutland Railroad, which began its life in 1847 as the Rutland & Burlington Railroad.

“In 1849, the company was given two years to extend its line from Burlington to St. Albans if it could build the tracks,” Faith writes. “It didn’t, due to a lawsuit brought by its rival, the Vermont Central. South of Burlington, however, the line progressed to the point where it was granted the mail contract following a race between one of its trains and a stagecoach from Bellows Falls to Burlington. The train won, by two hours, even though it had to use horses to carry the mail over an incomplete, eight-mile stretch from Summit (where construction crews earlier found the remains of a mastodon) to Cuttingsville.”

Faith goes on to report that the Rutland Railroad “limped along” with tracks so poorly maintained that other lines wouldn’t allow their equipment to run on them. The Rutland Railroad finally went belly up in 1961 when its lines were abandoned for good.

What’s to become of this relic? Bushway says a number of interested parties have approached her over the years, but she has refused to part with the train car. For sentimental reasons?

“No one ever wants to pay me for it!” she says. “They just want me to donate it or get it for free.”

Note to prospective buyers: Make Bushway a reasonable offer, and the car could be yours, with one proviso: You have to haul it away